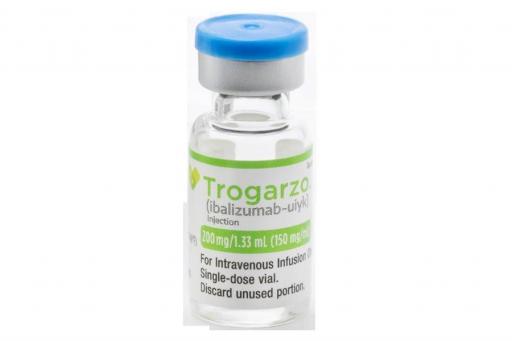 Long-acting antiretroviral administered once every two weeks via intravenous infusion. Treatment begins with an IV loading (starting) dose of 2,000 mg, followed by an 800 mg IV infusion maintenance dose given every two weeks thereafter. Must be taken in combination with another antiretroviral(s).

The first infusion takes at least 30 minutes. If no infusion-related adverse events occur, subsequent infusions take 15 minutes. Doses may be administered every two weeks at an inpatient and/or outpatient setting, including at-home infusion, if desired. All patients should be observed for 1 hour after completing first infusion. If no infusion-associated adverse reaction is noted, the post-infusion observation time can be reduced to 15 minutes for subsequent doses. A Biologics License Application (sBLA) was submitted to the FDA in December 2021 for approval of an IV push formulation that administers undiluted Trogarzo over 30 seconds. Intramuscular administration is also being studied. Trogarzo must be given with an optimized background regimen (OBR). An OBR consists of the best antiretroviral therapy that can be selected for a patient based on the patterns of HIV drug resistance of their virus. Other considerations can include safety profile, tolerability, and lack of adverse drug-drug interactions or cross-resistance. Dose modifications of Trogarzo are not required when administered with any other antiretroviral or any other treatments.

If a maintenance dose of Trogarzo is missed by 3 days or longer beyond the scheduled dosing day, a loading dose (2,000 mg) should be administered as soon as possible. Then resume maintenance dosing (800 mg) every 14 days thereafter.

The most common adverse reactions observed in clinical studies were diarrhea (8%), dizziness (8%), nausea (5%), and rash (5%). Select lab abnormalities noted to occur in at least 5% of studied patients were increased bilirubin by greater than 2.6 times ULN (upper limit of normal), 5%; increased creatinine (greater than 1.8 times ULN or 1.5x baseline), 10%; increased lipase (greater than 3 times ULN), 5%; decreased leukocytes, 5%; and decreased neutrophils, 5%. Most (90%) of the adverse reactions reported were mild or moderate in severity. No formal studies were conducted to examine the effects of either renal or hepatic impairment on the pharmacokinetics of Trogarzo. Renal impairment is not anticipated to affect the pharmacokinetics of Trogarzo. Based on animal data using higher doses of medication than would be used in humans, the FDA updated the drug label last year to include the potential for transient immunosuppression in infants exposed to the drug inside the womb. See Section 8.1 (Pregnancy) in the prescribing information for more details.

Based on Trogarzo’s mechanism of action and pharmacokinetic profile, drug-drug interactions are not expected. No formal drug interaction studies have been conducted with Trogarzo.

Essentially, this drug is for heavily treatment-experienced people with multidrug resistance, along with an optimized background regimen (OBR). Go to bit.ly/Trogarzo-mechanism-of-action to watch a YouTube video of its mechanism of action. A key point is that people must still take other HIV medications that have some activity—there has to be at least one HIV drug to which their virus is sensitive included in their OBR. DHHS HIV treatment guidelines list Trogarzo this way: “People with ongoing detectable viremia [detectable viral load] who lack sufficient treatment options to construct a fully suppressive regimen [get to undetectable viral load] may be candidates for the recently approved [in 2018] CD4 post-attachment inhibitor ibalizumab.” Trogarzo is a newer option, but it does come with some rules. Non-adherence won’t be an option—people won’t be able to just show up whenever they want or be late to appointments when going to an infusion center. People must be on time. It is expensive because the cost of the drug is in addition to other expenses such as the time at the infusion center and cost for qualified individuals to administer and handle the medication, although there may be an option for people to receive their infusion at home. Infusions can also be done at clinics and at IV centers.

Although given once every two weeks, because it must be used with other HIV medications, antiviral treatment will still be required to be taken daily. Other long-acting HIV drugs are on the way, however, and may be studied in combination with Trogarzo as well. Trogarzo is also the first HIV orphan drug—one that is produced for a relatively small population of people, fewer than 200,000. It was produced for people with multidrug-resistant HIV, estimated to be fewer than 40,000 in the U.S.; the company estimates there are fewer than 25,000. These are heavily treatment-experienced people who have multidrug resistance, and have, therefore, limited treatment options. Trogarzo has been shown to work against highly drug-resistant virus, when combined with an OBR. Data presented at ID Week 2020 showed evidence for long-term safety and efficacy as well as tolerability in people receiving Trogarzo for almost a decade. Trogarzo has also demonstrated CD4 improvements in clinical studies.

As a biologic, IBA is the first HIV medication produced in cells rather than from chemicals. This does not make Trogarzo better, just different. Trogarzo works differently from any other HIV drug currently on the market. It binds to a domain (location) of the CD4 receptor (in this case, domain 2), blocking viral entry into the CD4 cell. Most HIV drugs target parts of HIV, which are variable and thus susceptible to resistance. Trogarzo works against both CCR5 and CXCR4 virus, and may be synergistic with some other classes of antiretrovirals. Resistance test results revealed no evidence of cross-resistance between Trogarzo and any of the approved classes of HIV drugs. Trogarzo is neither metabolized in the liver nor eliminated by the kidneys. Monoclonal antibodies such as ibalizumab are transported across the placenta as pregnancy progresses; therefore, the developing fetus has the potential to be exposed to Trogarzo. Pregnant individuals can voluntarily enroll in the Antiretroviral Pregnancy Registry through their provider; go to apregistry.com.

Thera Patient Support can assist with private or government insurance coverage, including AIDS Drug Assistance Program (ADAP), and will also assist in applying any eligible co‑pay assistance. Commercially insured people may be eligible for co-pay assistance and may pay as little as $0. Call (833) 23-THERA (833-238-4372), or go to therapatientsupport.com.

Ibalizumab is an entry inhibitor that has activity against multidrug-resistant HIV. It requires intravenous infusions every 2 weeks, and at a wholesale acquisition cost of $9,896 per month, is the most expensive antiretroviral drug ever approved, and administration costs are not included. Nonetheless, the egregious pricing is accompanied by a patient assistance program that protects people—if not the healthcare system—from much of the financial burden. Still, the drug can be a lifesaver for people with multidrug-resistant virus who cannot otherwise construct a viable regimen. It has no known drug-drug interactions.

Trogarzo (ibalizumab) is the first drug in a new class called a CD4-directed post-attachment inhibitor. Trogarzo blocks the virus from entering CD4 cells. Trogarzo is for use only in highly treatment-experienced people, meaning those who have already been on treatment for some time and have virus that is resistant to multiple HIV drugs. People using Trogarzo have virtually no other treatment options. More convenient oral or injectable HIV drugs are in development to treat multidrug-resistant virus in highly treatment-experienced people; but until those drugs are fully evaluated and approved, Trogarzo remains an important tool in the antiretroviral toolbox.