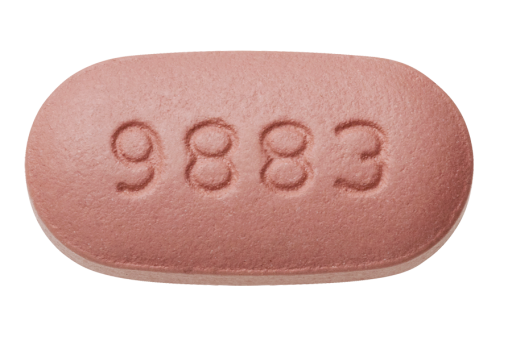 Recommended initial regimen for most people

One tablet once daily without regard to food for people taking HIV treatment for the first time (treatment-naïve) or individuals with suppressed viral load on a stable HIV regimen with no history of treatment failure and no known resistance to components of the regimen: bictegravir, emtricitabine, or tenofovir. Tablet contains 50 mg of the INSTI bictegravir plus 200 mg emtricitabine and 25 mg TAF.

For adults and children weighing at least 55 pounds (25 kg). Take missed dose as soon as possible, unless it is closer to the time of your next dose. Do not double up on your next dose. Biktarvy is not recommended for people with CrCl less than 30 mL/min or people with severe liver impairment (see “More information”).

Most common side effects observed in study participants include nausea (5%), headache (5%), and diarrhea (6%). Six individuals in Study 1490 and none in Study 1489 stopped Biktarvy due to side effects, none of which were due to kidney problems. New data associate INSTIs and TAF with weight gain. See weight gain in “More information;” go to positivelyaware.com/articles/weighty-concerns and positivelyaware.com/articles/fatty-tissues.

Serum creatinine, estimated creatinine clearance, urine glucose, and urine protein should be obtained before initiating Biktarvy and should be monitored during therapy. Bictegravir can cause a small, reversible increase in serum creatinine within the first few weeks of treatment that does not affect actual kidney function. There have been rare reports of depression and suicidal ideation, primarily among patients with a history of psychiatric illnesses, in people who are on INSTI-based regimens. The DHHS guidelines recommend closely monitoring patients with pre-existing psychiatric conditions on an INSTI. Prior to initiation, people should be tested for hepatitis B virus (HBV) infection. Severe exacerbations of hepatitis B have been reported in people co-infected with hepatitis B who have discontinued Biktarvy (due to elimination of the emtricitabine and TAF components, which also treat HBV). Monitor liver enzymes closely in people co-infected with hepatitis B and, if appropriate, initiation of anti-hepatitis B therapy may be warranted upon Biktarvy discontinuation. Call your health care provider right away if you develop any of the following signs or symptoms of hepatitis: yellowing of the skin or whites of the eyes; dark or tea-colored urine; pale-colored bowel movements; nausea or vomiting; loss of appetite; or pain, aching, or tenderness on the right side below the ribs.

Do not take with rifampin or the anti-arrhythmic dofetilide (a heart medication). Not recommended to be taken with Cimduo or Temixys, Descovy, Emtriva, Epivir-HBV, Hepsera, Truvada, Vemlidy, or Viread, all for treatment of hepatitis B, as the emtricitabine and tenofovir components of Biktarvy already treat HBV. Biktarvy can be taken at least two hours before or six hours after taking laxatives or antacids, the ulcer medication sucralfate, oral iron or calcium supplements (but either of these two can be used with Biktarvy if taken with food at the same time), or buffered medications. Start metformin at lowest dose and titrate based on tolerability and clinical effect. Monitor for metformin adverse effects. When starting or stopping Biktarvy in people on metformin, dose adjustment of metformin may be necessary to maintain optimal glycemic control. Not recommended with St. John’s wort. Can be taken with the hepatitis C medications Epclusa, Harvoni, Sovaldi, and Vosevi. Not intended to be taken with other HIV medications, unless prescribed that way.

Tell your provider or pharmacist about all medications, herbals, and supplements you are taking or thinking of taking, prescribed or not, as there are other drug interactions which are not listed here.

Biktarvy is widely prescribed because of its efficacy and safety profile as well as zero resistance emerging from use of this treatment. Weight gain, however, is being more commonly recognized as a potential side effect of INSTIs. In the community, enlargement of the stomach and waist area can be distressing. According to the DHHS HIV treatment guidelines, “Weight gain has been associated with initiation of ART [antiretroviral therapy] and subsequent viral suppression.

The increase appears to be greater with INSTIs than with other drug classes. Greater weight increase has also been reported with TAF than with TDF, and greater with DOR than EFV.” Other factors have been associated with weight gain in addition to medication used, including race, sex, and previous overweight status. There is no word yet on reversibility of weight gain, but the race is on to find more answers. The data show that the bictegravir drug resistance barrier is comparable to that of dolutegravir and ritonavir- or cobicistat-boosted protease inhibitors (such as darunavir in Prezista or Symtuza). That is a huge advantage.

There are also now data supporting the use of Biktarvy in people with some resistance to its FTC component (the M184V change to HIV’s genetic structure). Data are also accumulating that show Biktarvy works for people who have detectable virus when they switch to it from another regimen (having experienced virologic failure on their previous regimen). Biktarvy is a small INSTI-based STR tablet, which may help some individuals who have difficulty swallowing pills. Pediatric study is ongoing. At this time, there aren’t sufficient data to support the use of Biktarvy during pregnancy. Although not part of the drug label, Biktarvy is regularly used without dose adjustment with hemodialysis, and there are data supporting that use.

Biktarvy, a triple drug STR containing the INSTI bictegravir and 2 NRTIs, TAF and emtricitabine  (FTC), is recommended for first-line initial therapy by DHHS and IAS-USA HIV guidelines, including for people with hepatitis B. (Remember that stopping Biktarvy can cause a hepatitis flair in people with hep B!) It has become a favorite for initial therapy because of its potency, high barrier to resistance, ability to take with or without food, and its small pill size. It also is a popular choice for rapid start of treatment before labs return. Bictegravir is not available as a stand-alone medication. Biktarvy is generally well tolerated, but INSTIs and TAF both have been associated with weight gain, so discussions about diet and exercise are important, and weight should be monitored, although it is not clear that switching therapy reverses this problem after the fact. Bictegravir, like all INSTIs, also can be associated with insomnia and other nervous system side effects, including worsening of pre-existing depression.

Biktarvy can be taken with or without food, and drug interactions are fewer with Biktarvy than with boosted drugs or NNRTIs. There are still some important interactions, including contraindications for use with dofetilide and rifampin. The drug interaction with metformin is often underappreciated and should be managed carefully. As with all INSTIs, calcium, magnesium, zinc, aluminum, and iron supplements can lower levels of bictegravir and dosing recommendations should be followed.

As a newer single-tablet regimen, Biktarvy is considered safe, tolerable, and effective. Used for both new starts and clinically stable patient switches, the pill size is quite manageable. There are some drug interactions, but overall, most patients find the medication easy to take. Keep an open line with your clinician about all medications you take.