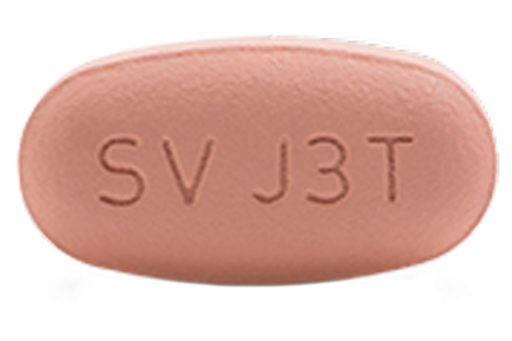 Recommended as continuation therapy for people with undetectable HIV viral load for at least 6 months and do not have HBV co-infection.

One tablet once daily, with a meal (see Edurant), for adults who are virologically suppressed (have an undetectable viral load of less than 50 copies per mL) on a current ART (antiretroviral therapy) regimen for at least six months and who have no history of treatment failure or resistance mutations associated with rilpivirine or dolutegravir. Tablet contains 50 mg of the INSTI dolutegravir plus 25 mg of the NNRTI rilpivirine.

Take missed dose as soon as possible, with a meal, unless it is closer to the time of your next dose. Do not double up on your next dose. For proper absorption, rilpivirine must be taken with a meal that you chew—not just nutritional drinks or protein shakes.

Both dolutegravir and rilpivirine are generally well tolerated. Side effects observed in greater than 2% of study participants were diarrhea and headache. Data associate INSTIs with weight gain. Dolutegravir and rilpivirine can each cause a small, reversible increase in a kidney function test (serum creatinine) within the first few weeks of treatment without affecting actual kidney function. There have been rare reports of depression and suicidal ideation with INSTIs, primarily in people with a history of psychiatric illnesses. DHHS guidelines recommend closely monitoring anyone with pre-existing psychiatric conditions. Liver enzymes should be monitored in people with hepatitis B or C and taking dolutegravir. Call your health care provider right away if you develop any of the following signs of hepatitis: yellowing of the skin or whites of the eyes; dark or tea-colored urine; pale-colored bowel movements; nausea or vomiting; loss of appetite; or pain, aching, or tenderness on the right side below the ribs.

Do not take Juluca with rifampin, rifapentine, or the anti-arrhythmic dofetilide (a heart medication). If taking rifabutin, add an Edurant tablet to Juluca dose. If you take antacids, laxatives, or other products that contain aluminum, calcium carbonate, magnesium, or buffered medicines, Juluca should be taken—with a meal, as always—at least 4 hours before or 6 hours after you take these medicines. Alternatively, these medications can be taken at the same time with Juluca and the meal. Take Juluca with a meal 4 hours before or 12 hours after you take H2 blocker acid reducers (Pepcid, Zantac, Tagamet). Juluca should not be taken with proton pump inhibitors (such as Aciphex, Dexilant, Prilosec, Prevacid, Protonix, Nexium). Avoid taking Juluca with some seizure medicines (carbamazepine, oxcarbazepine, phenobarbital, and phenytoin) or St. John’s wort. DHHS HIV treatment guidelines suggest that metformin be started at the lowest dose and titrated based on tolerability and clinical effect. Monitor for metformin adverse effects. When starting or stopping Juluca in people taking metformin, dose adjustment of metformin may be necessary to maintain optimal glycemic control. Not intended to be taken with other HIV medications, unless prescribed that way. Tell your provider or pharmacist about all medications, herbals, and supplements you are taking or thinking of taking, prescribed or not, as there are other drug interactions which are not listed here.

Juluca was the first two-drug combination approved as a complete regimen for HIV. It replaces a three- or four-drug therapy for people with undetectable viral loads who want to switch to a simpler or smaller tablet regimen. Juluca still works against two stages of the virus life cycle, as do the three-drug regimens. The guidelines cite Juluca as “a reasonable option when using nucleoside drugs is not desirable”—for example, due to previous toxicity—with an A1 rating (strong recommendation based on randomized controlled trials). Juluca is the smallest STR, which may be advantageous to individuals who have difficulty swallowing. For individuals with HIV-2, commonly found outside the U.S., an NNRTI would not be recommended, as HIV-2 is inherently resistant to NNRTIs. Rilpivirine is an alternative drug for use during pregnancy, and although dolutegravir is now a preferred medication in pregnancy as well as for people who are trying to conceive, U.S. HIV perinatal treatment guidelines suggest using three-drug regimens. Find the discussion on page C-53 of perinatal guidelines at hivinfo.nih.gov. Pregnant individuals can voluntarily enroll in the Antiretroviral Pregnancy Registry through their provider; go to apregistry.com.

Not approved for initial therapy, Juluca is a nuke-sparing two-drug regimen for maintenance of viral suppression in people who are doing well on their current regimen. Because it does not contain any drugs active against hepatitis B, you shouldn’t go on Juluca if you have hepatitis B.

Weight gain, rash, insomnia, liver toxicity, and new or worsening depression have been noted with components of Juluca. Diarrhea and headache were its most common side effects in the SWORD clinical trials. Creatinine increased by about 0.1 mg/dL in SWORD, but this was due to changes in kidney secretion of the drugs, not kidney toxicity.

Juluca cannot be taken with dofetilide and some medications for seizures and tuberculosis. In addition, St. John’s wort, dexamethasone, and acid blockers should be avoided as they decrease levels of rilpivirine, dolutegravir, or both. Metformin levels are increased by dolutegravir and may need to be adjusted, and should be limited to 1,000 mg/day. Juluca should be taken 4 hours before or 6 hours after taking sucralfate or aluminum- or magnesium-containing supplements or medications, or if taking calcium- or iron-containing products on an empty stomach. Calcium and iron can be taken with Juluca if taken with a meal.

Concerns about birth defects with dolutegravir have greatly diminished, but should be discussed with an HIV care provider (see Tivicay).

There is speculation that Juluca might be used as a bridging drug if doses of Cabenuva have to be missed, due to the similarities between dolutegravir and cabotegravir. This has not been studied in clinical trials. Oral cabotegravir and rilpivirine are supplied by ViiV at no cost for persons on Cabenuva.

For more information about Juluca, see comments on Tivicay and Edurant.

Approved in 2017, Juluca was the first two-drug STR. Getting a two-drug STR into clinical use was a big deal. But there are downsides. First off, Juluca is for use only by people who have been undetectable on another regimen for at least six months, not for first-time treatment. People with HIV and HBV co-infection should not take Juluca, because neither dolutegravir nor rilpivirine treats HBV. The rilpivirine component has significant drug-drug interactions, and needs to be taken with food (at least 400 calories). Two years after launching Juluca, drugmaker ViiV got approval for Dovato, which kept the dolutegravir component, but replaced the rilpivirine with the NRTI lamivudine—a two-drug regimen that is among those recommended for initial treatment. If your provider recommends Juluca, they may have a good reason, but ask them what it is.