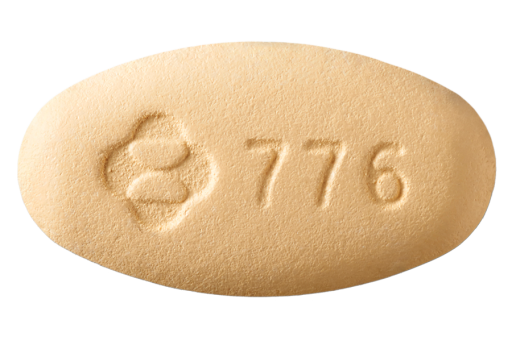 One tablet once daily without regard to food for people taking HIV treatment for the first time (treatment-naïve) or individuals with suppressed viral load on a stable HIV regimen for at least 6 months who have no known resistance to components of the regimen: doravirine, lamivudine, or tenofovir. Tablet contains 100 mg of the NNRTI doravirine plus 300 mg lamivudine and 300 mg tenofovir DF (TDF). Approved only for adults at this time.

The most common adverse reactions observed with Delstrigo in clinical trials were dizziness (7%), nausea (5%), abnormal dreams (5%), and headache (4%). Neuropsychiatric events—such as depression, sleep disturbances, dizziness, etc.—are another common side effect of the NNRTI drug class. The proportion of people who reported one or more neuropsychiatric adverse events overall was 24% for the Delstrigo group compared to 57% for the Atripla group in the DRIVE-AHEAD study. Neuropsychiatric adverse events associated with depression and suicide/self-injury were reported in 4% of the Delstrigo group compared to 7% of the Atripla group. Overall, sleep disturbances (for example, abnormal dreams, insomnia, nightmares, etc.) were associated with 12% of people in the Delstrigo group compared to 26% of people in the Atripla group. Dizziness was experienced by 9% of the Delstrigo group compared to 37% of the Atripla group. Altered sensorium (for example, lethargy, drowsiness, etc.) was associated with 4% of people in the Delstrigo group compared to 8% of those on Atripla. The doravirine component of Delstrigo did not appear to negatively affect cholesterol in studied populations. Decreases in bone mineral density (BMD) have been observed in people on TDF-containing regimens. BMD monitoring should be considered for people who have a history of bone fracture due to bone disease or are at risk for osteopenia or osteoporosis. TDF may cause kidney toxicities. Creatinine clearance (CrCl) should be assessed before initiating treatment. In addition to CrCl, glucose and protein in the urine and serum phosphorus should be monitored more often in people at risk for kidney problems. Tell your provider about any pain in extremities, persistent or worsening bone pain and fractures, with or without muscular pain or weakness, as well as any concerning changes in urinary habits, as these could be signs of kidney problems. Prior to initiation, people should be tested for hepatitis B virus (HBV) infection. Severe exacerbations of hepatitis B have been reported in people co-infected with HBV who have discontinued Delstrigo (due to elimination of the lamivudine and TDF components, which also treat HBV). Monitor liver enzymes closely in people co-infected with HBV and, if appropriate, initiation of anti-hepatitis B therapy may be warranted upon Delstrigo discontinuation. Call your health care provider right away if you develop any of the following signs or symptoms of hepatitis: yellowing of the skin or whites of the eyes; dark or tea-colored urine; pale-colored bowel movements; nausea or vomiting; loss of appetite; or pain, aching, or tenderness on the right side below the ribs.

Do not take with Cimduo or Temixys, Descovy, Emtriva, Epivir-HBV, Hepsera, Truvada, Vemlidy, or Viread, all used for hepatitis B. When using with the antibiotic drug rifabutin (used for TB and to prevent MAC in people with AIDS), increase the doravirine dose by adding a Pifeltro 100 mg tablet approximately 12 hours later. Avoid taking Delstrigo with drugs that negatively affect the kidneys, including chronic use or high doses of anti-inflammatory drugs for pain such as Advil or Motrin (ibuprofen) and Aleve (naproxen). The following medications may lower the blood levels of doravirine, and therefore may decrease its effectiveness, and should not be used with Delstrigo: the anticonvulsants carbamazepine, oxcarbazepine, phenobarbital, and phenytoin; the androgen receptor inhibitor enzalutamide; the antimycobacterials rifampin and rifapentine; the cytotoxic agent (a cancer drug) mitotane; and the herbal St. John’s wort. Avoid using sorbitol-containing medicines with lamivudine; there are many, such as acetaminophen liquid (Tylenol liquid and others). Epclusa and Harvoni each increase the concentration of TDF; monitor for adverse reactions. Not intended to be taken with other HIV medications, unless prescribed that way. Tell your provider or pharmacist about all medications, herbals, and supplements you are taking or thinking of taking, prescribed or not, as there are other drug interactions that are not listed here.

Stand-alone versions of doravirine (Pifeltro) and lamivudine/tenofovir DF (Cimduo, Temixys) are also approved; see those pages. Delstrigo contains an older prodrug of tenofovir, TDF. A safer version, TAF, is available and used in some STRs. However, as TAF and INSTIs may have some association with weight gain, Delstrigo may become a more popular option. According to a new DHHS statement last year, “In a cross-trial analysis, DOR was not associated with weight gain compared with [efavirenz] 600 mg or boosted [darunavir].” TDF is still an effective and quite tolerable medication, but TAF has potentially less long-term renal and bone toxicity. Doravirine has not been directly compared to integrase inhibitor-based regimens in clinical trials yet. In the DRIVE-FORWARD study comparing doravirine to darunavir, at 96 weeks, 72% of treatment-naïve individuals in the doravirine group attained undetectable status (a viral load of less than 50 copies/mL), compared to 65% for the darunavir group. For individuals with HIV-2, commonly found outside the U.S., an NNRTI would not be recommended as HIV-2 is inherently resistant to NNRTIs. There are no data on the safe use of Delstrigo during pregnancy. Pregnant individuals can voluntarily enroll in the Antiretroviral Pregnancy Registry through their provider; go to apregistry.com.

Delstrigo is the first STR to be coformulated with a newly approved drug and two drugs that are generic, allowing for a lower average wholesale cost of $2,315 per month. You would expect it to be lower than it is, though, wouldn’t you? Doravirine was well tolerated in clinical trials, with fewer neuropsychiatric side effects than efavirenz, in the DRIVE-AHEAD trial, and less diarrhea and nausea than ritonavir-boosted darunavir, based on DRIVE-FORWARD. Lipid changes were lower with the doravirine regimen in both trials. Kidney and bone density effects of TDF are key considerations in terms of side effects (see Viread). In a cross-study analysis, mean weight gain with doravirine (1.7 kg—that is, 3.74 lbs.) was more than with efavirenz (0.6 kg) and similar to that with ritonavir-boosted darunavir (1.4 kg) at 48 weeks, but all were similar at week 96.

Doravirine has fewer drug-drug interactions than either efavirenz or rilpivirine, but levels can be decreased by some seizure or tuberculosis medicines, St. John’s wort, and enzalutamide, an androgen blocker. Initial hope that it might be genetically more robust and less likely to select for drug resistance, however, has been somewhat disappointing. Because none of the doravirine trials compared the drug to INSTIs, it isn’t recommended as initial therapy for most people in the U.S., although the Europeans have elevated Delstrigo to first line in the recent EACS guidelines.

Delstrigo is not recommended in pregnancy due to insufficient data on safety.

TDF, notorious for safety issues with bones and kidneys, has been kicked aside by its safer chemical cousin, tenofovir alafenamide (TAF). If your provider recommends Delstrigo, they may have a good reason, but make sure they tell you what it is.