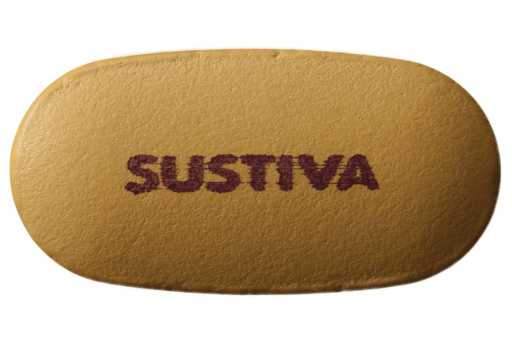 One 600 mg tablet once daily, preferably on an empty stomach at bedtime. Must be taken in combination with another antiretroviral(s) which does not contain the medication in this drug or medication from the same drug class.

Approved for adults and children 3 months and older weighing at least 7.7 pounds (3.5 kg). For children weighing less than 88 pounds (40 kg), the dose is based on weight. See the package insert for specific weight-based dosing. For children weighing at least 88 pounds, use the standard adult dose. For those who can’t swallow capsules, administer by capsule sprinkle method. See below or drug label for instructions or watch video at sustiva.com.

Central nervous system (CNS) symptoms (dizziness, insomnia, impaired concentration, abnormal or vivid dreams, and hallucinations) are most common at the start of treatment and usually diminish in two to four weeks. Bedtime dosing on an empty stomach can help reduce symptoms. Less common psychiatric symptoms (catatonia, depression, suicidal thoughts or actions, aggression, paranoid/manic reactions) may also occur. A 2014 study reviewed four previously published AIDS Clinical Trials Group (ACTG) studies regarding efavirenz and suicidal ideation and re-emphasized the fact that efavirenz has an association with suicidality (reported suicidal ideation or attempted or completed suicide), and should be used with caution in patients with severe or uncontrolled depression and/or a history of suicidality. It is recommended for anyone on a regimen containing efavirenz to be screened for depression and suicidality. Additional side effects may include rash, nausea, vomiting, diarrhea, and fever. Rash in children is more common and more severe. Efavirenz may raise levels of triglycerides (fat in the blood) and cholesterol. Efavirenz can cause a false positive for marijuana on certain drug tests. A more specific confirmatory test can be done. A link to birth defects in humans has not been supported in meta-analyses. The pregnancy recommendation is that women in their first trimester continue taking efavirenz as long as their viral load remains undetectable; however, efavirenz should only be used if the potential benefit outweighs the potential risk, as when other treatment options are not available. Because of the association with suicidality and neuropsychiatric effects, it is also recommended to screen for antenatal and postpartum depression in women with HIV who are taking a regimen containing efavirenz. Regular monitoring for increased liver enzyme levels is recommended initially and during treatment for people with hepatitis B/C or liver disease.

Tell your provider or pharmacist about all medications, herbals, supplements, and over-the-counter products you are taking or thinking of taking, prescribed or not, as there are other drug interactions not listed here. Do not take with midazolam, pimozide, ergot derivatives, St. John’s wort, or triazolam. May affect warfarin levels. Can decrease levels of buprenorphine and methadone—monitor for withdrawal. Increase Kaletra to two 200/50 mg tablets plus one 100/25 mg tablet twice daily (total 500/125 mg twice daily) with food when taken with Sustiva. Kaletra cannot be taken once daily with Sustiva. When using with Tivicay, increase the Tivicay dose to 50 mg twice daily. Treatment-experienced people should not take Reyataz with Sustiva, but for treatment-naïve people, Reyataz once-daily dose should be 400 mg with Norvir boost. Boost once-daily Lexiva 1,400 mg with 300 mg Norvir. No change in the ritonavir dose is required when efavirenz is administered with Lexiva plus ritonavir twice daily. Increase Selzentry to 600 mg twice daily. Increase the Sustiva dose to 800 mg once daily with rifampin for people weighing 110 pounds (50 kg) or more. Rifabutin can be used as an alternative, but dose adjustment is needed. When taken with carbamazepine, phenobarbital, or phenytoin, periodic monitoring of anticonvulsant and Sustiva levels should be done or alternative anti-seizure drugs, such as levetiracetam, should be considered. Effectiveness of birth control pills may be decreased; consider the use of other contraceptives. Closer monitoring and dose adjustments may be required with posaconazole (avoid unless benefit outweighs potential risk) and itraconazole. The dose of voriconazole should be increased to 400 mg every 12 hours and the Sustiva dose should be decreased to 300 mg once daily using capsules; tablets should not be broken. Monitor effectiveness of clarithromycin or consider using azithromycin instead. Levels of immunosuppressants should be monitored when starting or stopping Sustiva. Cardizem, Lipitor, Pravachol, and Zocor doses may need to be adjusted. Titrate dose of bupropion and sertraline based on clinical response. Should not be taken with other medications that prolong QT interval or medications with a known risk of torsades de pointes. No dose adjustment with Harvoni or Sovaldi. Increase Daklinza dose to 90 mg with Sustiva. Don’t take with Epclusa, Olysio, Viekira Pak, or Zepatier. Tell your provider or pharmacist about all medications, herbals, and supplements you are taking or thinking of taking, prescribed or not, as there are other drug interactions which are not listed here.

If you can’t sleep, ask your doctor about gradually adjusting the timing of your dose until it’s taken during the day. A rare genetic trait affecting drug metabolism of Sustiva, leading to a higher rate of side effects, occurs more in African Americans. In pediatric HIV guidelines, Sustiva was downgraded in 2017 from “preferred” to an “alternative” component of an initial regimen for children ages 3–12 years. For individuals with HIV-2, commonly found in some other countries, an NNRTI would not be recommended as HIV-2 is inherently resistant to NNRTIs. Efavirenz is found in the single-tablet regimens Atripla, Symfi, and Symfi Lo; see those pages.

Approved in 1998, Sustiva was the “queen bee” of antiretrovirals as the “kinder and gentler” alternative to the highly potent but difficult to tolerate protease inhibitors until the appearance of the integrase inhibitors in 2007. Although highly potent against HIV and taken just once daily, the unique side effects of grogginess, dizziness, and vivid dreams were often treatment-limiting side effects for many PLWH. It was thought that these side effects would go away over time, but long-term studies with Sustiva (up to 5 years) showed that they never improve for some PLWH. Worsening of mental health conditions and increased suicidal thoughts and attempts have limited Sustiva’s use. It is still the most commonly prescribed antiretroviral in the world, although this is starting to change.

Efavirenz is a very potent and long-acting antiviral. Sustiva is the anchor drug of Atripla, the first and most widely used single-tablet regimen for the last 11 years. Sustiva’s central nervous system side effects are challenging. Dizziness, weird dreams, depression, and feeling tired constantly are some of the side effects reported. Some individuals tolerate it well and others manage to overcome them after three months. Other NNRTIs and INSTIs with no CNS side effects, as effective and way more tolerable have been developed.