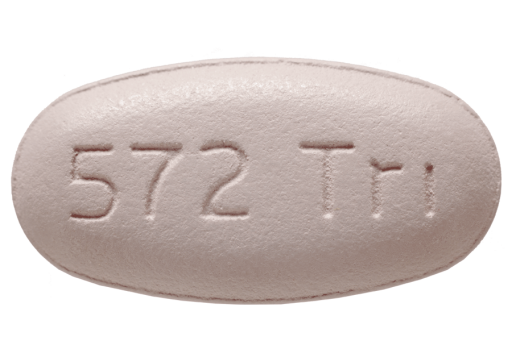 Recommended initial regimen for most people if HLA-B*5701 negative

One tablet once daily, without regard to food, for people with no evidence of INSTI resistance. An additional 50 mg dose of dolutegravir (brand name Tivicay) separated by 12 hours from Triumeq is required for people who have INSTI drug resistance or are taking certain other medications. Tablet contains 50 mg of the INSTI dolutegravir plus 600 mg abacavir and 300 mg lamivudine.

For adults and children weighing at least 88 pounds (40 kg). Take missed dose as soon as possible, unless it is closer to the time of your next dose. Do not double up on your next dose. Dose cannot be adjusted for people with kidney or liver problems. Triumeq should not be used in people with CrCl less than 50 mL/min or moderate or severe liver impairment

Triumeq is generally well tolerated. The most common side effects that occurred in 2–3% of study subjects are insomnia, headache, and fatigue. Dolutegravir can cause a small, reversible increase in serum creatinine within the first few weeks of treatment without affecting actual kidney function. There have been rare reports of depression and suicidal ideation, primarily in patients with a history of psychiatric illnesses, in people receiving INSTI-based regimens. The DHHS guidelines recommend closely monitoring patients with pre-existing psychiatric conditions on an INSTI. Conflicting data suggest a potential risk for heart problems when using abacavir-containing regimens in people with high risk for cardiovascular disease. Monitor for signs of hypersensitivity reaction (HSR) to abacavir. Prior to starting Triumeq, all individuals should be given a blood test for HLA-B*5701 (a genetic marker) to identify patients at risk for this reaction. This test is covered by most insurance and by LabCorp/ViiV (see company contact on co-pay chart). Read more about HSR online. Prior to initiation, people should be tested for hepatitis B (HBV) infection. Severe exacerbations of hepatitis B have been reported in people who are co-infected with hepatitis B and have discontinued the lamivudine component. Monitor liver enzymes closely in people co-infected with hepatitis B and, if appropriate, initiation of anti-hepatitis B therapy may be warranted. See “More Information.”

Do not take with the anti-arrhythmic dofetilide. Triumeq should be taken two hours before or six hours after taking antacids or laxatives, the ulcer medication Carafate, iron or calcium supplements, or buffered medications. Triumeq can be taken together with iron- or calcium-containing supplements if taken with food. Other acid reducers/heartburn medications (e.g., Aciphex, Dexilant, Prilosec, Pepcid, Zantac, Prevacid) are okay to use. Avoid co-administration with oxcarbazepine, phenobarbital, phenytoin, or St. John’s wort. Start metformin at lowest dose and titrate based on glycemic control. Monitor for metformin adverse effects. Avoid use of sorbitol-containing medicines with lamivudine; there are many, such as acetaminophen liquid (Tylenol liquid and others). Not intended to be taken with other HIV medications, unless prescribed that way. Tell your provider or pharmacist about all medications, herbals, and supplements you are taking or thinking of taking, prescribed or not, as there are other drug interactions which are not listed here.

Triumeq is the only single-tablet regimen (STR) that contains Epzicom as the NRTI backbone. Compared to other INSTIs, dolutegravir has a relatively high genetic barrier against the development of drug resistance, similar to the protease inhibitors (such as Prezista). In addition, dolutegravir-containing regimens have demonstrated virologic superiority over Prezista-containing regimens. Triumeq has relatively few drug interactions and is well tolerated. Triumeq does not cover HBV as well as other STRs and therefore requires another anti-HBV medication in addition to its lamivudine component. Triumeq is a relatively large STR tablet, which can potentially be an issue for individuals who have difficulty swallowing. Another STR containing dolutegravir is Juluca. New preliminary data from an observational study in Botswana suggest that there may be an increased risk of birth defects in infants born to those who were receiving dolutegravir at the time of conception. Until more information is available, regimens containing dolutegravir are not recommended for use in ART-naïve patients who are pregnant and within 12 weeks of conception. Consult your provider to discuss guidance on how to manage regimens containing dolutegravir if there is any possibility of conception.

Triumeq was the fourth STR approved, in 2014, the second STR containing an integrase inhibitor (without a booster), and the first STR with Ziagen/Epivir instead of Viread/Emtriva. In three of four initial studies in PLWH starting their first ART regimen (including one study for women only) comparing Triumeq to either Sustiva, Prezista/Norvir, Reyataz/Norvir, or Isentress, Triumeq was shown to be superior to (better than) the comparison ART regimen (Atripla, Prezista/Norvir, and Reyataz/Norvir) and similar to the other integrase inhibitor-containing ART regimen (Isentress). These results were strengthened by the finding that in all of these studies, no HIV resistance (viral mutations) was found when a PLWH’s viral load did not respond, or stopped responding, to Triumeq and their viral load became detectable. This was a new and unique finding for Triumeq compared to other integrase inhibitor-containing ART regimens (Stribild, Genvoya, and Isentress). In clinical trials, side effects seen with Triumeq have been uncommon and rarely a reason for PLWH to stop their treatment. HIV drug resistance associated with Triumeq has been seen in clinical practice in a handful of oftentimes poorly or incompletely documented anecdotal cases since its approval. Recently, the use of dolutegravir in HIV-positive women who desire to become pregnant or who could become pregnant without contraception has been strongly discouraged by many international and national regulatory and advisory organizations (WHO, DHHS/FDA, IAS-USA, EACS) due to the unexpected observation of an increased incidence of neural tube defects (serious birth defects affecting a baby’s neurologic system) seen among HIV-positive women receiving dolutegravir at the time of conception in Botswana in a preliminary review of the Tsepamo study. Final results of the study will be reported later in 2019. Of note, these birth defects have not been seen in women who start dolutegravir in the second or third trimester of pregnancy. Some HIV-treating medical care providers and PLWH have avoided Triumeq due to reports of an increased risk of heart attacks with Ziagen, one of the medications in Triumeq. This sometimes limits the use of Triumeq. In addition, it is strongly encouraged that PLWH have a blood test to look for a genetic marker (HLA-B*5701) that is associated with a serious allergic reaction to the Ziagen. If the marker is present, no ART regimen with Ziagen should be used. Triumeq has been and continues to be a recommended first-line ART regimen since its approval in both DHHS and IAS-USA guidelines. An increasing, but still small, number of reports have noted increased cases of insomnia, mental stimulation, and worsening of mental health problems associated with Triumeq.

Make sure your doctor monitors your kidney function as well your heart. Abacavir has been associated with cardiovascular disease and a serious allergic reaction for which the drug must be discontinued immediately and never taken again. It’s important to make sure you are not predisposed to this hypersensitivity reaction seen with abacavir. There is a blood test that can predict predisposition to it.