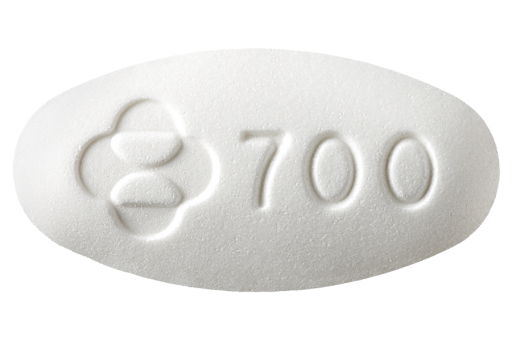 One 100 mg tablet once daily without regard to food in combination with other antiretroviral drugs in people taking HIV treatment for the first time (treatment-naïve) or to replace the current antiretroviral regimen in those who are virologically suppressed (HIV viral load less than 50 copies/mL) on a stable antiretroviral regimen with no history of treatment failure and no known viral substitutions associated with resistance to doravirine. Must be taken in combination with another antiretroviral(s) which does not contain this medication or medication from the same drug class.

Most common side effects (with an incidence of 5% or greater) observed in Pifeltro studies were nausea (7%), headache (6%), fatigue (6%), diarrhea (6%), and abdominal pain (5%). Rash, which is a common side effect of the NNRTIs, was reported in up to 2% of the studied population. In the DRIVE-AHEAD study, an in-depth analysis examined the incidence of neuropsychiatric adverse events associated with a doravirine-containing regimen (Delstrigo) compared to Atripla. Neuropsychiatric events, such as depression, sleep disturbances, and dizziness, are another common side effect of the NNRTI class. Doravirine did not appear to negatively affect cholesterol in studied populations.

When taken with the antibiotic drug rifabutin (used for TB and MAC treatment), increase the Pifeltro dose to one 100 mg tablet twice a day, approximately every 12 hours. The following are among the medications that may lower the blood levels of Pifeltro, and therefore may decrease its effectiveness, and should not be used with Pifeltro: the anticonvulsants carbamazepine, oxcarbazepine, phenobarbital, and phenytoin; the androgen receptor inhibitor enzalutamide; the antimycobacterials rifampin and rifapentine; the cytotoxic agent (cancer drug) mitotane; and the herbal St. John’s wort. Tell your provider or pharmacist about all medications, herbals, and supplements you are taking or thinking of taking, prescribed or not, as there are other drug interactions which are not listed here.

FDA approved in 2018. Doravirine may be an option for patients who have developed drug resistance to other NNRTIs. A single-tablet regimen (STR) containing doravirine was also approved in 2018; see Delstrigo page. Delstrigo, however, contains the older version of tenofovir, tenofovir DF. The stand-alone Pifeltro allows people to take it with the newer tenofovir alafenamide (TAF), found in Descovy, which has potentially less long-term renal and bone toxicity. On the other hand, of course, the use of Pifeltro means the necessity for an extra pill, such as Descovy, or maybe more than one extra pill, depending on the regimen being used.

Pifeltro was found to be non-inferior to boosted darunavir (Prezista) as well as efavirenz (Sustiva) at 48 weeks. Doravirine was superior to boosted darunavir at week 96 in terms of virologic suppression, but it should be noted there was a higher rate of study discontinuation in the boosted darunavir group. Doravirine is a non-nucleoside medication, and it should be noted that this drug class typically has a lower barrier to resistance, as well as extensive cross-resistance. Additionally, the emergence of resistance at the time of virologic failure has been reported with doravirine. Doravirine has tolerability advantages over efavirenz and has relatively favorable lipid effects when compared to both boosted darunavir and efavirenz. It also has fewer potential drug interactions than efavirenz or rilpivirine, and, unlike rilpivirine, virologic efficacy is not compromised among people with high baseline viral loads or low CD4 counts. Doravirine has not yet been directly compared to integrase inhibitor-based regimens in clinical trials. For individuals with HIV-2, commonly found in some other countries, an NNRTI would not be recommended as HIV-2 is inherently resistant to NNRTIs. No adequate human data are available yet to establish whether or not Pifeltro poses a risk to pregnancy outcomes. Health care providers are encouraged to register patients to the Antiretroviral Pregnancy Registry (APR) at 800-258-4263.

The newest NNRTI, doravirine, was never compared against INSTIs in clinical trials, therefore is not considered a recommended drug for starting treatment by most people. It has some advantages over efavirenz, including fewer nervous system side effects, no food requirements, and no substantial effect on cholesterol.

Pifeltro is now also approved as part of a “switch” regimen for people with suppressed virus and no evidence of prior virologic failure or resistance mutations to drugs in the new regimen.

It is less fussy than rilpiivirine and can be used regardless of viral load and CD4 count, and does not require food or interact with acid blockers. There are some important drug contraindications, though, including with the tuberculosis drug rifabutin, some seizure drugs, the herbal supplement St. John’s wort, and enzalutamide (Xtandi), an anti-androgen approved for prostate cancer but also taken by some transgender women.

Pifeltro should not be taken by individuals who are pregnant as there are insufficient data at this time.

Doravirine can be used as both a new start medication or as a stable switch option for fighting HIV. The drug is easy to take and has the benefit of being safe with antacids. It has no restrictions with regard to CD4 or viral load for initiating therapy.