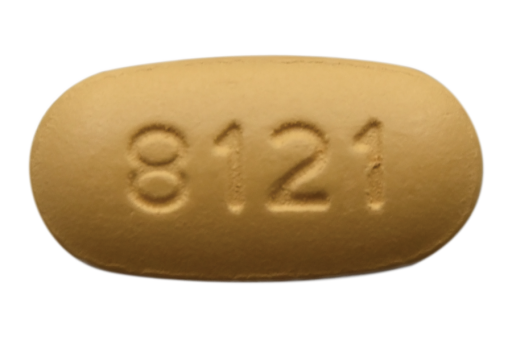 One tablet once daily with food for treatment-naïve individuals or individuals with suppressed viral load on a stable HIV regimen for at least six months who have no known resistance to the darunavir or tenofovir components of the regimen. Tablet contains 800 mg darunavir, boosted by 150 mg cobicistat, with 200 mg emtricitabine and 10 mg TAF.

For adults and children weighing at least 88 pounds (40 kg). Take missed dose as soon as possible, unless it is closer to the time of your next dose. Do not double up on your next dose. Dose cannot be adjusted for people with kidney or liver problems. Symtuza can be used by people with an estimated creatinine clearance of at least 30 mL/ min. It should not be used by people who have severe kidney or liver impairment. Symtuza is not recommended during pregnancy due to substantially lower exposures of darunavir and cobicistat components during pregnancy.

Darunavir contains a sulfa component, so use with caution in people with sulfa allergies. Side effects most commonly reported in studies include diarrhea (9%), rash (8%), nausea (6%), fatigue (4%), headache (3%), abdominal discomfort (2%), and flatulence (2%). While very rare (in less than 0.4% of those taking it), severe rash, accompanied in some cases by fever and/or elevations of AST/ALT (liver enzymes), can be life-threatening. Seek medical attention immediately. Data associate TAF with weight gain. Observational cohort studies reported an association between some PIs (including darunavir taken with ritonavir) and an increased risk of cardiovascular (CV) events. Data on darunavir plus cobicistat are too limited to make these conclusions. With PIs, there can be increased bleeding in hemophiliacs. Cobicistat can cause a small, reversible increase in serum creatinine (SCr, which decreases estimated creatinine clearance) within the first few weeks of treatment without affecting glomerular filtration (the process by which the kidneys filter the blood; see Tybost for more information). While cobicistat does not affect actual kidney function, its effect on SCr can make monitoring of impaired kidney function more difficult or less accurate. However, people experiencing a confirmed increase in serum creatinine of greater than 0.4 mg/dL from baseline should be closely monitored for renal safety. Serum phosphorus in people with or at risk for kidney impairment should also be monitored. Prior to initiation, people should be tested for hepatitis B virus (HBV) infection. Severe exacerbations of hepatitis B have been reported in people co-infected with hepatitis B who have discontinued Symtuza (due to elimination of the emtricitabine and TAF components, which also treat hepatitis B). Monitor liver enzymes closely in people co-infected with HBV and, if appropriate, initiation of anti-hepatitis B therapy may be warranted upon Symtuza discontinuation. Call your health care provider right away if you develop any of the following signs or symptoms of hepatitis: yellowing of the skin or whites of the eyes; dark or tea-colored urine; pale-colored bowel movements; nausea or vomiting; loss of appetite; or pain, aching, or tenderness on the right side below the ribs.

Do not take with alfuzosin, carbamazepine, dexamethasone, dronedarone, ergot derivatives, ivabradine, triazolam, oral midazolam, lomitapide, lurasidone, naloxegol, phenobarbital, phenytoin, pimozide, Revatio, simvastatin, lovastatin, St. John’s wort, ranolazine, or rifampin. Monitor for lack of virologic response when eslicarbazepine or oxcarbazepine is necessary. Not recommended to be taken with avanafil, ciclesonide, dabigatran etexilate (in renal impairment), everolimus, Intelence, irinotecan, mometasone, rifabutin, rifapentine, rivaroxaban, salmeterol, ticagrelor, triamcinolone, or voriconazole. Beclomethasone, prednisolone, and prednisone as alternative corticosteroids may be considered, particularly for long-term use. Atorvastatin and rosuvastatin dose should not exceed 20 mg daily. Clinical monitoring is recommended with drospirenone, due to potential for hyperkalemia. Apixaban (Eliquis) dose may need to be adjusted. Do not take with colchicine if there is kidney or liver impairment. Initiation or dose adjustments of insulin or oral hypoglycemic medications may be required for some individuals. Cannot be taken with Zepatier. Based on the mechanism of action, drug interactions with other hepatitis C medications are probably similar to the interactions with Prezcobix + Descovy. Not intended to be taken with other HIV medications, unless prescribed that way. Tell your provider or pharmacist about all medications, herbals, and supplements you are taking or thinking of taking, prescribed or not, as there are other drug interactions that are not listed here.

Symtuza is the first STR containing a protease inhibitor. This formulation is much more convenient and reduces the number of co-pays to one. It is not the same as Prezcobix plus Descovy, because Symtuza contains a lower dose of TAF than Descovy. A benefit of the PIs is their high genetic barrier to developing drug resistance. While medical providers may hate to say it out loud, this means greater forgiveness of missed doses; missing a dose here and there is never advisable but does happen. As such, a PI-based regimen such as Symtuza suits some people who may have trouble with the near-perfect drug adherence required of HIV treatment. In fact, the FDA allowed Janssen to advertise Symtuza as “help[s] protect against resistance.” Symtuza may be used in rapid initiation treatment given within seven days of HIV diagnosis, before resistance test results are available. The DHHS recommendation, “in certain clinical situations,” refers to concerns around adherence and the need for rapid initiation. Treatment-experienced individuals with undetectable viral loads for at least six months may switch to Symtuza. Compared with tenofovir DF, the tenofovir alafenamide in Symtuza is safer on kidney and bone health. Also as a result of the TAF, Symtuza can be taken by people with more advanced kidney disease, down to a renal function (CrCl) of 30 mL/min. Darunavir-containing regimens had stronger evidence supporting their use than do regimens containing atazanavir (the only other PI on the market). Darunavir regimens have an AI rating from DHHS (“A” for “strong” recommendation and the Roman numeral “I” for “data from randomized controlled trials”) vs. a BI rating for atazanavir (“B” for “Moderate”).

Pregnant individuals can voluntarily enroll in the Antiretroviral Pregnancy Registry through their provider; go to apregistry.com.

Symtuza is the first 4-drug STR and the most expensive of regimens for initial therapy at a wholesale acquisition cost of $4,065 per month. It is not recommended for initial therapy for most people because of all of the drug-drug interactions that COBI brings to the table. A relatively small, open label study of Symtuza for rapid ART [antiretroviral therapy] initiation found high levels of viral suppression and low drug-related side effects, suggesting a potential use in this setting for people who cannot take the recommended INSTI regimens. Darunavir has a high genetic barrier to resistance. A large observational study found an association between darunavir and cardiovascular disease. Symtuza is not recommended in pregnancy because of lower levels of cobicistat and also darunavir in the second and third trimesters can decrease antiviral efficacy. If you are pregnant and on Symtuza, talk with your HIV care provider about whether you should continue the drug.

Back in the day, darunavir was touted for its high genetic barrier to resistance. But given newer options, nobody these days needs to be on a boosted anything. Cobicistat increases levels of darunavir by inhibiting an enzyme pathway in the liver. Problem is, it also boosts levels of other medications a person may be taking, and that can be a problem.