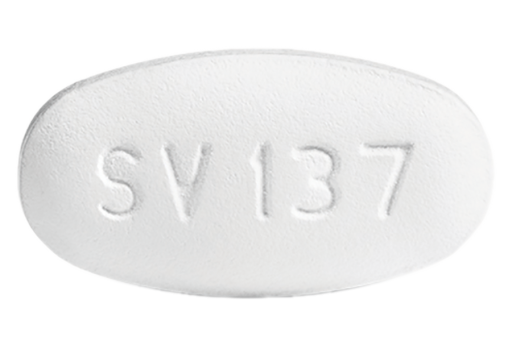 Recommended initial regimen for most people except those with viral load greater than 500,000 copies/mL, hepatitis B virus (HBV) co-infection, or before results of genotypic resistance or HBV testing

One tablet once daily, without regard to food for treatment-naïve people who have no known resistance to components of the regimen: dolutegravir and lamivudine. Tablet contains 50 mg of the INSTI dolutegravir plus 300 mg of the NRTI lamivudine.

Take missed dose as soon as possible, unless it is closer to the time of your next dose. Do not double up on your next dose. Dovato is not recommended for people who have severe liver impairment. According to the drug label, Dovato is not recommended for people with decreased kidney function (creatinine clearance less than 50 mL/min) due to the lamivudine component. This medication combination, however, is often used in reduced renal function below 50 mL/min, because of the relatively minimal risk of lamivudine accumulation and side effects. In addition, alternative doses may be obtained by using the individual components of this medication as needed.

Dolutegravir and lamivudine are both generally well tolerated. Side effects occurring in at least 2% of study participants receiving Dovato included headache, nausea, diarrhea, insomnia, fatigue, and dizziness. See weight gain in “More information;” go to positivelyaware.com/articles/weighty-concerns and positivelyaware.com/articles/fatty-tissues. Dolutegravir can cause a small, reversible increase in kidney function test (serum creatinine) within the first few weeks of treatment that does not affect actual kidney function.

There have been rare reports of depression and suicidal ideation, primarily in patients with a history of psychiatric illnesses, in people receiving INSTI-based regimens. DHHS guidelines recommend closely monitoring patients with pre-existing psychiatric conditions on an INSTI. Prior to initiation, people should be tested for hepatitis B virus (HBV) infection. Severe exacerbations of hepatitis B have been reported in people co-infected with hepatitis B who have discontinued Dovato (due to elimination of the lamivudine component, which also treats HBV). Monitor liver enzymes closely in people co-infected with hepatitis B and, if appropriate, initiation of anti-hepatitis B therapy may be warranted upon Dovato discontinuation. Call your health care provider right away if you develop any of the following signs or symptoms of hepatitis: yellowing of the skin or whites of the eyes; dark or tea-colored urine; pale-colored bowel movements; nausea or vomiting; loss of appetite; or pain, aching, or tenderness on the right side below the ribs.

Do not take Dovato with Epivir-HBV. When taking carbamazepine or rifampin, take an additional dose of dolutegravir (in the form of one Tivicay tablet) 50 mg 12 hours after taking your Dovato dose. When starting or stopping dolutegravir by people on metformin, dose adjustment of metformin may be necessary to maintain optimal glycemic control or tolerability. Avoid use of sorbitol-containing medicines with lamivudine; there are many, such as acetaminophen liquid (Tylenol liquid and others). There are no known drug-drug interactions with Daklinza, Epclusa, Harvoni, Olysio, Sovaldi, Viekira Pak, or Zepatier. Not intended to be taken with other HIV medications, unless prescribed that way. Tell your provider or pharmacist about all medications, herbals, and supplements you are taking or thinking of taking, prescribed or not, as there are other drug interactions which are not listed here.

Approved in April 2019. Basically, this medicine is Triumeq without the abacavir component (brand name Ziagen, also found in Epzicom). Dolutegravir is from the powerhouse drug class of integrase inhibitors, which are highly effective and generally tolerable. The benefits of using a two-drug regimen for HIV include less exposure to HIV medication while maintaining viral suppression and minimizing the potential for side effects. At one, two, and nearly three years in the GEMINI-1 and GEMINI-2 studies, DTG plus 3TC was found to be non-inferior to the triple drug regimen of DTG plus Truvada (emtricitabine and tenofovir DF combined in one pill).

At the 144-week point, for the two studies, 82% (584 out of 716 individuals) had undetectable viral load, compared to 84% (599 out of 717) of those taking the three-drug therapy. Everyone in the study was taking HIV treatment for the first time, and 20% of them had a high viral load of more than 100,000 copies per mL when entering the clinical trials. Dovato has also been successful for treatment-experienced people switching to it after being undetectable (viral load less than 50 copies per mL). The TANGO study evaluated treatment switch from TAF-containing regimens with three or more drugs to the 2-drug regimen of dolutegravir/lamivudine and, at both 48 and 96 weeks, found Dovato to be non-inferior to the three-drug regimen standard of care. Weight gain is being increasingly recognized as a side effect of INSTIs. In the community, enlargement of the stomach and waist area can be distressing. According to DHHS HIV treatment guidelines, “Weight gain has been associated with initiation of ART [antiretroviral therapy] and subsequent viral suppression.

The increase appears to be greater with INSTIs than with other drug classes. Greater weight increase has also been reported with TAF than with TDF, and greater with DOR than EFV.” Other factors have been associated with weight gain in addition to medication used, including race, sex, and previous overweight status. There is no word yet on reversibility, but the race is on to find more answers. Although dolutegravir is now a preferred medication during pregnancy as well as for those who are trying to conceive, U.S. HIV perinatal treatment guidelines suggest using three-drug regimens. Find the discussion on page C-51 of perinatal guidelines at hivinfo.nih.gov.

Dovato, a two-drug combination of dolutegravir and lamivudine (3TC), is the only two-drug STR recommended for starting therapy. However, Dovato is not recommended if HIV RNA is greater than 500,000 c/mL or CD4 less than 200 cells/mL, or for people with hepatitis B. Therefore, Dovato is not ideal for rapid start of ART before viral load, CD4, resistance testing, and HBV serology are available. Resistance to 3TC would mean dolutegravir monotherapy, a strategy that is not recommended. While some maintain that it can still be used for rapid start, it will be necessary to modify treatment if 3TC mutations, HBV infection, high viral load, or low CD4 are detected on pre-treatment labs.

Last August, FDA also approved Dovato as a switch option for persons with undetectable virus who do not have hepatitis B or a history of viral resistance to its components. This opens up Dovato as an option for those who started ART before labs returned and who have no contraindications. A potential advantage of switching would be to limit exposure to fewer drugs and therefore possibly fewer side effects, while the primary downside would be lack of very long-term data about durability of the regimen in this setting.

The very small increased risk of neural tube defects associated with dolutegravir in the updated Tsempano study should be discussed with persons of childbearing potential before starting dolutegravir. (See Tivicay.)

While the cost of Dovato (Wholesale Acquisition Cost of $27,540) is lower than that of three- and four-drug STRs such as Biktarvy, Triumeq, and Symtuza, it is still quite high, especially considering that 3TC is one of our oldest ARV with a generic cost of about $500 per year. Let’s work with Congress and the Biden administration to lower the cost of lifesaving drugs for people with HIV!

The second two-drug, single-tablet therapy pill on the market, Dovato has an easy pill size, minimal side effects, and a high barrier to resistance. That, in addition to maintaining viral suppression on less drug over time, makes it an attractive pill option for people looking for less medication in the body. It also can be taken with or without food, unlike Juluca, which must be taken with a meal.