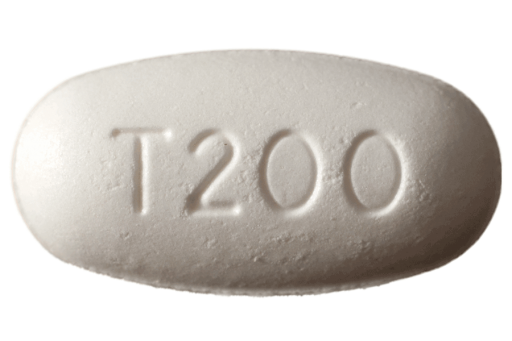 One 200 mg tablet, twice daily with a meal. Taking Intelence without food could result in a 50% decrease in the drug absorption and may lead to HIV drug resistance. Approved for treatment-experienced adults and children 2 years and older weighing at least 22 pounds (10 kg). See the package insert for specific weight-based dosing in children. Also available in 25 mg and 100 mg tablets. Must be taken in combination with another antiretroviral(s) that do not contain medication from the same drug class.

Take missed dose as soon as possible, unless it is closer to the time of your next dose. Do not double up on your next dose. People unable to swallow pills (Intelence tablets are “chalky”) can dissolve tablets in one teaspoon (5 mL) of water or at least enough liquid to cover the medication; stir well until the water turns milky, add more water if desired—or use a small amount (about one tablespoon) of orange juice or milk as an alternative, always placing tablets in water first. Avoid warm (over 104° F) or carbonated beverages. Drink immediately, rinse the glass several times with water, orange juice, or milk, and completely swallow the rinse each time to make sure the entire dose is taken.

Generally well tolerated, but most common side effects of moderate to severe intensity in adults include rash as well as numbness, tingling, or pain in the hands or feet. Discontinue Intelence immediately if signs or symptoms of severe skin reactions or hypersensitivity reactions develop (including, but not limited to, severe rash or rash accompanied by fever, general malaise [general ill feeling], fatigue, muscle or joint aches, blisters, oral lesions, conjunctivitis, facial edema, hepatitis, eosinophilia, or angioedema). Levels of liver enzymes called transaminases should be monitored. Rash is associated with all of the current NNRTIs, but if you develop a rash from Intelence, you may still be able to take one of the other NNRTIs. In pediatric patients age 2 to 18, the frequency, type, and severity of adverse drug reactions were comparable to those observed in adult subjects, except for rash, which was observed more frequently. In ages 6 to 18, rash of moderate intensity or greater (Grade 2 or greater) was reported more frequently in girls than boys (20.3% versus 5.4%). Half of the children 2–6 years old experienced rash of any grade, whereas rash of moderate intensity or greater was reported in 10% of adults. Rash is typically described as mild to moderate, pruritic (itchy), with pimple-like skin eruptions. For pediatric patients, rash usually appeared in the second week of therapy and generally resolved within a week. Discuss discontinuing etravirine if fever, blistering, or severe reaction occurs.

If Intelence is taken in combination with a protease inhibitor, the PI must be boosted with low-dose Norvir. Intelence should be avoided with Tivicay unless administered with one of the following combinations: Reyataz/Norvir, Prezista/Norvir, or Kaletra. Taking it in combination with Selzentry requires a Selzentry dose adjustment to 600 mg twice daily when used without a boosted PI, and 150 mg twice daily when used with a boosted PI. Do not take Intelence with Tegretol, Luminal, Dilantin, Priftin, Rifadin, or the herb St. John’s wort. Use with caution when combined with the antifungals Diflucan and Vfend. Dose adjustments of the antifungals ketoconazole, itraconazole, and posaconazole may be needed. Dose adjustments of certain cholesterol medications may be needed based on clinical response, including Lipitor, Lescol, Mevacor, Livalo, and Zocor. Monitor the effectiveness of Coumadin (warfarin) and adjust dose as needed based on clinical response. Alternatives to Plavix should be considered when used with Intelence. Alternatives to clarithromycin—such as azithromycin—should be considered for treatment of MAC. Lower Valium dose may be needed. Use caution with systemic dexamethasone or consider alternatives. Intelence can be taken with rifabutin (Mycobutin) 300 mg daily; however, it should be avoided by people who are also taking a boosted PI. Concentrations of some antiarrhythmics may be decreased when co-administered with Intelence. Intelence and antiarrhythmics should be co-administered with caution. Drug concentration monitoring is recommended, if available. Intelence can be safely combined with methadone or buprenorphine with additional monitoring for potential signs of withdrawal. Intelence can also be safely combined with Viagra, Cialis, and Levitra, though a dosage adjustment of Viagra may be necessary. Interaction with Harvoni has not been studied, but based on the metabolism, a clinically significant interaction is not expected. Taking with Zepatier is not recommended. Tell your provider or pharmacist about all medications, herbals, and supplements you are taking or thinking of taking, prescribed or not, as there are other drug interactions which are not listed here.

For people who have had virologic failure on an NNRTI-containing regimen, do not use Intelence in combination with a nucleoside backbone alone. Although taking once daily is not FDA approved, some providers are prescribing Intelence once daily (two of the 200 mg tablets) based on clinical trials that showed that once-daily Intelence was not inferior to Sustiva-based regimens. In Europe, it is approved as a once-daily medication. Once-daily dosing may improve patient adherence. Although the DHHS recommendation for Intelence specifies drug resistance strains before taking it, the drug label does not—you do not need to have drug resistance before taking Intelence. The TRIO study reported the combination of Intelence with Prezista/Norvir and Isentress in highly treatment-experienced people was successful in getting many people to undetectable. Some people complain of hard-to-swallow, large chalky pills; see dissolving instructions in dose section or package insert. For individuals with HIV-2, commonly found in some other countries, an NNRTI would not be recommended, as HIV-2 is inherently resistant to NNRTIs. DHHS guidelines do not recommend using etravirine in treatment-naïve people who are pregnant. Individuals who become pregnant while taking etravirine may continue taking Intelence if viral suppression is effective and the regimen is well tolerated. The pharmacokinetics (PK) of etravirine are not significantly altered during pregnancy, and no dosage adjustment is necessary. The PK data demonstrated that exposure to total etravirine was generally higher during pregnancy compared with postpartum levels. Etravirine is known to have a variable (moderate to high) level of transfer across the human placenta, although insufficient data exist to evaluate the effects on a fetus. Pregnant individuals can voluntarily enroll in the Antiretroviral Pregnancy Registry through their provider; go to apregistry.com.

Etravirine was approved near the time of raltegravir and darunavir, and the three drugs together became an important nuke-free regimen for many people with virus that was resistant to NRTIs, older PIs, and efavirenz. It was never approved for initial therapy and it has largely been superceded by rilpivirine and doravirine, both of which can be given once daily with lower pill burden and fewer drug interactions.

Intelence (etravirine, approved in 2008) is an NNRTI that is approved for use only in highly treatment-experienced people, meaning those who have already been on treatment for some time. Intelence is taken twice a day and must be taken with food. Intelence has problematic drug interactions with many widely prescribed drugs, including other HIV drugs. Given other available options, Intelence is not an obvious first choice for most people nowadays. If your provider recommends Intelence, they may have a good reason, but make sure they tell you what it is.