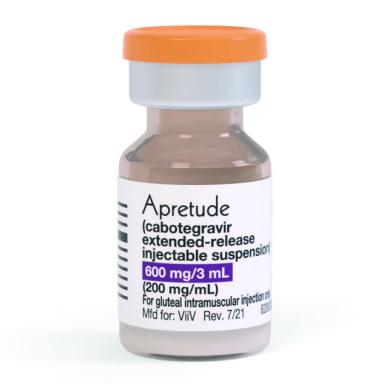 FDA approved for the prevention of HIV

For HIV-negative adults and adolescents (male, female, and transgender) weighing at least 77 pounds (35 kg) for the prevention of HIV. One long-acting intramuscular gluteal (butt muscle) 600 mg injection (3 mL) monthly for the first two months and then one injection every 2 months thereafter. No food restrictions.

Daily oral lead-in therapy for about a month is optional before injections begin, consisting of a 30 mg tablet of Vocabria. Initiate injections on last day of oral lead-in. Individuals who were on daily oral PrEP with Descovy or Truvada can transition directly to Apretude injections once their HIV-negative status is confirmed. Oral lead-in is used to determine tolerability. If up to 8 weeks of treatment is missed (less than or equal to 2 months), restart injections with the 600 mg dose of CAB LA as soon as possible, and then dose every 2 months thereafter. If more than 8 weeks of therapy has been missed, restart treatment with a 600 mg dose as soon as possible, followed a month later with another 600 mg dose, and then dose every two months thereafter. The oral medication can also be used as “bridging” if shots cannot be obtained on time—see package insert for instructions on planned and unplanned missed injections. The effect of severe liver impairment on cabotegravir is unknown. Longer needles, two inches (not included in the dosing kit), may be required for people with a higher BMI (body mass index) of 30 or more. Providers should follow directions for administration. (See Section 2.7 of package insert.)

The most common adverse reactions observed in 4% or more of people in clinical trials were injection site reactions (84%, with 59% having at least Grade 2—moderate—reactions), pyrexia (includes feeling hot, chills, and flu-like symptoms), fatigue, headache, and diarrhea. Hepatotoxicity has been reported in people with and without previous known liver problems or risk factors. Depressive disorders have been reported with Apretude and should be monitored. People given injections should be observed for approximately 10 minutes afterwards to monitor for potential reactions. Individuals with pain from injections can use an ice pack or heating pack, and are advised to stretch and remain active. It is not recommended to overly massage the area. Monitor for signs of hypersensitivity, including elevated liver transaminases, and treat as needed.

Cabotegravir is contraindicated with rifampicin, rifapentine, carbamazepine, oxcarbazepine, phenytoin, and phenobarbital. It is recommended to co-administer rifabutin with caution because rifabutin can moderately increase the metabolism of cabotegravir and result in lower protective levels of cabotegravir. The effect of feminizing medications and hormones such as spironolactone and estrogens is not known. The use of hormonal contraceptives is not expected to have any significant effect on cabotegravir levels or protective effect. Methadone dose may need to be adjusted. Tell your provider or pharmacist about all medications, herbals, and supplements you are taking or thinking of taking, prescribed or not, as there are other drug interactions that are not listed here.

Approved by the FDA on December 20, 2021, Apretude is the first-ever long-lasting injectable PrEP medication—dosed just once a month for 2 months and then every other month thereafter. New options are highly desirable—different strokes for different folks. According to PrEP guidelines from the U.S. Centers for Disease Control and Prevention (CDC), “Cabotegravir injections may be especially appropriate for people with significant renal disease, those who have had difficulty with adherent use of oral PrEP, and those who prefer injections every 2 months to an oral PrEP dosing schedule.” Go to bit.ly/cdc-prep-guidelines-2021. The label notes that, “Risk for HIV-1 acquisition includes behavioral, biological, or epidemiologic factors including, but not limited to, condomless sex, past or current STIs, self-identified HIV risk, having sexual partners of unknown HIV-1 viremic status, or sexual activity in a high prevalence area or network. Counsel individuals on the use of other prevention measures (e.g., consistent and correct condom use; knowledge of partner(s)’ HIV-1 status, including viral suppression status; regular testing for STIs that can facilitate HIV-1 transmission).” Advice on preparing for injection site reactions is included along with two important counseling points: the risk of developing drug resistance if HIV is acquired after stopping medication and the drug is still leaving the body, and the importance of keeping up follow-up appointments if stopping PrEP for any reason (page 51). The costs of taking HIV PrEP, which includes STI testing, must be paid for by insurance carriers without co-pays or other cost sharing. Go to bit.ly/dol-FAQ-ACA-part47. Insurers, however, may be more likely to insist that people on PrEP take the less costly generic version of Truvada. DHHS guidelines have a section on the use of cabotegravir for people with a history of injection drug use. Because cabotegravir has been detected in systemic circulation for up to 12 months or longer after the last injection, consideration should be given to potential for fetal exposure if prescribing cabotegravir to people of child-bearing potential who are not on birth control. Pregnant individuals can voluntarily enroll in the Antiretroviral Pregnancy Registry through their provider; go to apregistry.com

One of the most exciting developments of 2021 was the approval of injectable cabotegravir as PrEP. Given once every two months after an initial two injections given one month apart, Apretude was superior to oral Truvada in preventing new HIV infections for gay and bisexual men and transgender women, and for cisgender women.

My editorial comment here is that this could be a revolutionary step that improves adherence to treatment for people who don’t mind injections. But there are some major caveats. I can only echo the masterful statement by Treatment Action Group: “In order for this new PrEP option to maximally contribute toward ending the U.S. HIV epidemic, we must immediately and fully scale-up additional intervention studies, demonstration projects, and sociobehavioral science studies that address unique barriers to access for all major vulnerable populations—including transgender and gender-nonconforming people; Black, indigenous, Latinx and other communities of color; cisgender women; people who use drugs; and people living in the Southern U.S. and rural communities, which are generally underserved by HIV prevention services relative to urban areas.”

While oral PrEP must be provided without out-of-pocket costs for people due to its “A” rating from the U.S. Preventative Services Task Force (USPSTF), at the time of publication, USPSTF decisions on the coverage for CAB PrEP were still pending. I will just say that this is a make-or-break moment for PrEP in the U.S. and to facilitate uptake with equity, the drug as well as its administration costs and associated labs (including STI screening) must be fully covered without cost sharing.

People can either start PrEP with Apretude or take oral cabotegravir (Vocabria) for one month to make sure they have no side effects that would prevent them from taking Apretude. The approval of Apretude is based on results from two clinical trials comparing Apretude to Truvada for PrEP. One trial enrolled men and transgender women who have sex with men and have high-risk behavior for HIV. The other trials enrolled cisgender women at risk of acquiring HIV. Both studies found Apretude to be superior to Truvada in preventing HIV infection.