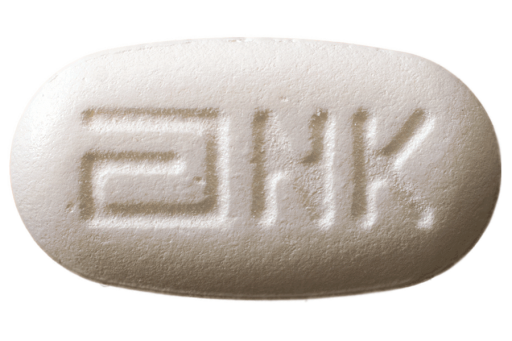 Used only as a booster for other drugs; recommended as a component of initial regimen in certain clinical situations

Used as a boosting agent (or PK enhancer) for other protease inhibitors (increases the levels of other PIs), at smaller doses of 100 to 200 mg, taken either once or twice a day with the PI and a meal.

Approved for children older than one month with dosing based on body surface area; the use in children depends on the co-administered PI. Capsule formulation requires refrigeration, but tablet does not. Liquid formulation available (80 mg/mL) in peppermint caramel flavor, but is not very palatable. The taste of the liquid can be improved by mixing with chocolate milk, peanut butter, Ensure, or Advera within one hour of dosing. The liquid formulation should not be taken by pregnant women, as it contains 43% alcohol. Norvir oral powder available in 100 mg packets, is free of alcohol and propylene glycol (both of which are found in the liquid formulation), and thus safer for pediatric use.

The side effect potential of Norvir is much lower now that it is only used as a booster at low doses. Most common side effects include stomach pain, nausea, diarrhea, and vomiting. Other less common side effects may include fatigue; tingling/numbness around the mouth, hands, or feet; loss of appetite; and taste disturbances. Norvir can also increase cholesterol and triglyceride levels. Measure liver function before starting and then monitor, with perhaps closer monitoring for those with underlying liver problems, especially during the first several months. No dose adjustment necessary with mild to moderate liver disease, but Norvir is not recommended for those with severe liver impairment.

Norvir interacts with many drugs. Of note, Norvir is not interchangeable with Tybost. Also, Norvir tablets are not interchangeable with Norvir capsules. Do not take with alfuzosin, amiodarone, flecainide, lurasidone, propafenone, oral midazolam, triazolam, pimozide, ranolazine, Revatio, rifapentine, rifampin, voriconazole, ergot derivatives, or the herb St. John’s wort. Do not use lovastatin or simvastatin or co-formulations containing these drugs (Advicor and Vytorin) for the treatment of high cholesterol. Cholesterol-lowering alternatives are atorvastatin, rosuvastatin, pravastatin, pitavastatin, and fluvastatin, but should be used with caution and started at the lowest dose possible; monitor for increased side effects. Norvir increases levels of nasal and inhaled fluticasone (found in Advair, Flonase, Breo Ellipta, Arnuity Ellipta, and Flovent), which may lead to Cushing’s syndrome. Use an alternative corticosteroid and monitor for signs of Cushing’s syndrome (increased abdominal fat, fatty hump between the shoulders, rounded face, red/purple stretch marks, bone loss, increased appetite, possible high blood pressure, and sometimes diabetes). Trazodone concentrations may increase; a lower dose of trazodone is recommended. Norvir may decrease levels of methadone, therefore titrate dose of methadone to clinical effect. Use caution with anticonvulsants such as carbamazepine, phenobarbital, and phenytoin. Use calcium channel blockers (amlodipine, nifedipine, and others) with caution. Norvir may alter warfarin levels; additional monitoring is required. Taking Norvir with most other blood thinners (anticoagulants), such as Xarelto, is not recommended; however, it can be used with apixaban (Eliquis) with monitoring and an adjusted dose of apixaban.

Norvir can increase anticoagulant concentrations (and thereby increase risk of bleeding) or decrease their concentrations (and thereby decrease effectiveness). Cialis, Levitra, and Viagra levels are increased; doses should not exceed 10 mg Cialis or 2.5 mg Levitra per 72 hours, or 25 mg Viagra per 48 hours. Monitor for increased side effects of these medications, such as visual disturbances, low blood pressure, dizziness, and prolonged painful erection lasting longer than four hours. Effectiveness of oral contraceptives may be decreased; consider using other or alternative methods of contraception. Levels of the street drug ecstasy are greatly increased by Norvir, and at least one death has been attributed to the combination. Using Norvir with methamphetamines can result in up to a 2–3-fold increase in methamphetamine concentrations, increasing the risk for overdose. GHB, another street drug, as well as cocaine are also dangerous with Norvir. Clarithromycin levels can increase by up to 80%. Co-administer bosentan, salmeterol, and immunosuppressants with caution. If co-administered, a lower dose of colchicine is recommended. Norvir, when combined with another PI, may be taken with Sovaldi, Daklinza (dose may need adjustment), Epclusa (monitor for tenofovir toxicity if TDF is part of regimen), and Harvoni (if TDF is not part of HIV regimen). Norvir + PI should not be taken with Olysio, Viekira Pak, or Zepatier. Tell your provider or pharmacist about all medications, herbals, and supplements you are taking or thinking of taking, prescribed or not, as there are many other drug interactions which are not listed here.

The advantage of Norvir is its use at low doses with other protease inhibitors (PIs) as a boosting agent (officially in the drug class called “pharmacokinetic enhancers”). As such, it’s used to increase the levels of some PIs. Stomach side effects are reduced by taking Norvir with high-fat foods—however, some other HIV medicines should not be taken with high-fat foods.

Because Abbott would not allow ritonavir to be coformulated with any other than its own drugs, there were no coformulated PIs, except Kaletra, until cobicistat came around. Ritonavir has been largely supplanted by cobicistat because it allows coformulation.

The drug interactions of ritonavir and cobicistat are slightly different, so before changing from one to the other, review interactions for each coadministered drug carefully.

Ritonavir became generic in 2018. Like most HIV generics, by the time it is off patent, it’s just not used any more. Could we look at those patent laws, please?

Norvir is no longer used as a frontline medication, but in lower doses is still an effective booster for other HIV medications, specifically protease inhibitors. Norvir will increase the effects of these and other medications.