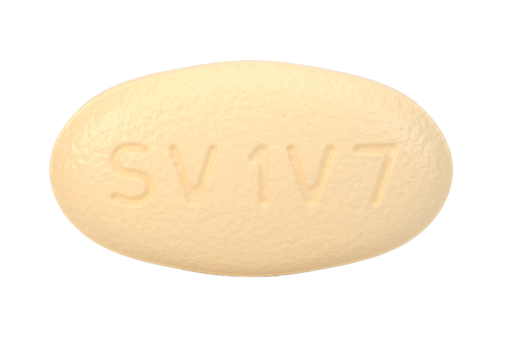 One 600 mg tablet twice daily without regard to food. For heavily treatment-experienced people with multidrug-resistant virus on a failing HIV regimen due to resistance, intolerance, or safety considerations. Must be taken in combination with another antiretroviral(s).

Take missed dose as soon as possible, unless it is closer to the time of your next dose. Do not double up on your next dose. Tablet should be swallowed whole; do not chew, crush, or split tablets.

At the time of approval in 2020, the most common side effect was nausea in 10% of study participants. Other side effects, observed less often, were diarrhea and fatigue. Use with caution in people who have a history of QTc prolongation (a heart problem). Liver problems can occur, but are very rare. The risk may be greater for people with a history of hepatitis B or C, but may occur in people without a history of liver disease.

Dose modification of fostemsavir is not required when co-administering with atazanavir/ritonavir, cobicistat, darunavir/cobicistat, darunavir/ritonavir with and without etravirine, etravirine, maraviroc, raltegravir, ritonavir, or tenofovir DF. Dose modification is also not required when co-administering with buprenorphine/naloxone, famotidine, methadone, norethindrone, or rifabutin (with or without ritonavir). It is not recommended to co-administer with rifampin, an antimycobacterial used for tuberculosis treatment, due to significantly reduced levels of fostemsavir. Cannot be taken with (contraindicated with) enzalutamide (an androgen receptor inhibitor), the anticonvulsants carbamazepine and phenytoin, the cancer drug mitotane, or the herb St. John’s wort. Fostemsavir increases concentrations of statins (medications that treat cholesterol). Use the lowest possible starting dose for statins and monitor for statin-associated adverse effects. Rukobia should be used with caution when taken with other medications with a known risk for torsades de pointes or QT prolongation (these abnormal heart rhythms can make the heart stop). Fostemsavir could affect oral contraceptive concentrations, especially those containing ethinyl estradiol. If a booster is not given in the regimen with fostemsavir, it may be co-administered with a combined oral contraceptive containing norethindrone and 30 mcg or less of ethinyl estradiol. It cannot be taken by trans women on estrogen hormone therapy due to the significantly increased risk for a blood clot. May increase levels of the hepatitis C virus (HCV) drugs grazoprevir and voxilaprevir; however, the magnitude of increase in exposure is currently unknown. Increased levels of grazoprevir may increase the risk of liver enzymes. Use an alternative HCV regimen if possible. Tell your provider or pharmacist about all medications, herbals, and supplements you are taking or thinking of taking, prescribed or not, as there may be other drug interactions which are not listed here.

Rukobia is a gp120 attachment inhibitor. A member of the drug class of HIV entry inhibitors, Rukobia works on the gp120 envelope protein that lies on the surface of the virus. It’s a necessary part of getting the virus to enter the cell. Rukobia prevents attachment to the CD4 immune cell by blocking gp120 from binding to the CD4 receptor binding sites. This causes the virus to accumulate in extracellular space and is subsequently removed by the body’s immune system. Very cool. Watch a video of its mechanism of action at youtu.be/WnreXE-TVi8. Rukobia is designed to be used in highly treatment-experienced people, who typically have fewer options for HIV treatment than those just beginning antiretroviral therapy. An option for treatment-experienced individuals is a good thing. “Even in the era of modern HAART [highly active antiretroviral therapy], antiretroviral [ARV] failure and resistance is still a problem worldwide,” wrote HIV specialist Dr. Pedro Cahn and colleagues in Current Opinion in HIV and AIDS published July 2018. Dr. Cahn worked on fostemsavir research. Given that Rukobia does not appear to have cross-resistance to any currently approved antiretroviral, as well as its activity regardless of HIV tropism, it is a welcome new drug for people with very limited treatment options. Rukobia is active against CCR5, CXCR4, and dual-mixed virus (Selzentry is only active against CCR5). For individuals with HIV-2, commonly found in some other countries, Rukobia would not be recommended, as HIV-2 is inherently resistant to it. For more data, including medications added for optimized therapy, go to the FDA approval announcement at fda.gov/news-events/press-announcements/fda-approves-new-hiv-treatment-patients-limited-treatment-options. Pregnant individuals can voluntarily enroll in the Antiretroviral Pregnancy Registry through their provider; go to apregistry.com.

Fostemsavir, the prodrug of the active entity temsavir, is the first-in-class oral attachment inhibitor that prevents HIV from entering the T cell to establish permanent residency. It is approved only for treatment-experienced people, and is active against virus that is resistant to all other classes. The drug must be taken twice daily, but is well tolerated in general, with nausea being the most common side effect. There are a few drug-drug interactions of note, including contraindications to administration with the androgen receptor inhibitor enzalutamide, some seizure and tuberculosis medicines, mitotane, and St. John’s wort. Temsavir can increase plasma concentrations of the hepatitis C drugs grazoprevir and voxilaprevir, the oral contraceptive ethinyl estradiol (a maximum dose of 30 mcg is recommended), and most of the statins.

Fostemsavir was taken with ibalizumab by a handful of people in the BRIGHTE study, but for some people with less advanced drug resistance, fostemsavir might offer an alternative to drugs such as ibalizumab or enfuvirtide.

Fostemsavir is the most expensive oral HIV drug with a wholesale acquisition cost of $7,650 per month, likely due to the relatively small market for the drug. There is a patient assistance program that makes the drug affordable to people while allowing ViiV to keep the price egregiously high.

Fostemsavir should not be used in pregnancy due to insufficient safety data.

Approved in 2020, Rukobia (fostemsavir) is the first drug in a new class called a gp120-directed attachment inhibitor. Rukobia blocks the virus from entering CD4 cells. Rukobia is for use only in highly treatment-experienced people, meaning those who have already been on ART for some time and have virus that is resistant to multiple HIV drugs. Rukobia is one pill once a day with or without food. Rukobia must be used in combination with other HIV drugs, called an optimized background regimen (OBR). The OBR varies from person to person, based on the precise pattern of drug resistance of their virus. People using Rukobia have virtually no other treatment options. More convenient oral or injectable HIV drugs are in development to treat multi-drug-resistant virus in highly treatment-experienced people; but until those drugs are fully evaluated and approved, Rukobia remains an important tool in the HIV treatment toolbox.