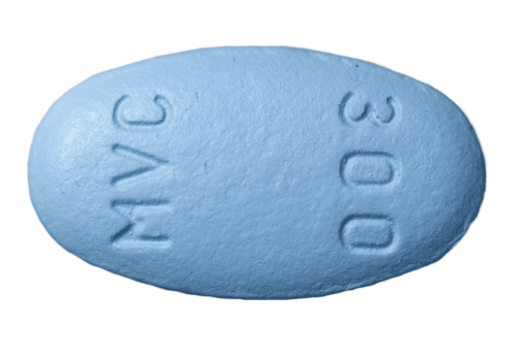 The recommended dose varies depending on other medications being taken but will be either 150, 300, or 600 mg twice daily (available in 150 mg and 300 mg tablets). Can be taken without regard to food. Approved for adults and children weighing at least 4.4 pounds (2 kg) and having a creatinine clearance of at least 30 mL/min (measurement of kidney function); dose depends on weight. Available in a 20 mg/mL oral solution as well as 25 mg and 75 mg tablets. Selzentry for children is dosed based on body weight. See the package insert or DHHS guidelines for weight-based dosing. The oral solution should be administered using the included press-in bottle adapter and oral dosing syringe. Must be taken in combination with another antiretroviral(s).

Take missed dose as soon as possible, unless it is closer to the time of your next dose. Do not double up on your next dose. Before starting Selzentry, a specific blood test called a Trofile is required to determine if this medication will work.

The most common side effects occurring in greater than 8% of studied people include cough, pyrexia (fever), upper respiratory tract infections, rash, musculoskeletal symptoms, abdominal pain, and dizziness. Other less common side effects may include allergic reactions, liver toxicity, and heart problems in people with a history of heart disease. Rarely, Selzentry can cause dizziness or fainting when standing up due to low blood pressure. Caution should be used when administering Selzentry in people with a history of or risk factors for postural hypotension, cardiovascular comorbidities, or taking concomitant medication known to lower blood pressure. Stop taking Selzentry and contact your provider right away if you develop a rash, yellowing of your eyes or skin, dark urine, vomiting, or upper stomach pain. Selzentry should not be used by people with severe or end-stage kidney disease who are taking medications that can affect the level of Selzentry (check with your provider). Selzentry affects immune system cells and could possibly increase the risk of infections and cancer, although this has not been observed in studies with up to five years of follow-up, and some data indicate it may be beneficial in cancer or for preventing metastasis (the spread of cancer to other parts of the body).

Not recommended by DHHS as a component of an initial regimen due to requirement of CCR5 tropism testing prior to initiation of therapy, lack of virologic benefit when compared to other recommended regimens, and because it requires twice-daily dosing.

Selzentry is generally recommended only when HIV medications from other classes cannot be used or when a new class of medication is needed to construct a complete and durable treatment regimen for people who have drug resistance. Complex dosing, the need for a tropism test, and competition from newer drugs have dimmed some of the initial enthusiasm for this drug. In research bringing Trogarzo to market, Selzentry was often chosen to help create an optimized background regimen. Research participants had extensive HIV drug resistance. A tropism assay (Trofile, Trofile DNA, or HIV-1 Coreceptor Tropism with Reflex to UDS) is needed to determine if this medication will work. Results of a phenotypic tropism test (Trofile or Trofile DNA) may take up to a month to complete. Genotypic tests are also available and may provide a faster and less expensive alternative. Learn about Selzentry’s mechanism of action at youtube.com/watch?v=oneYI0fhGa0. Selzentry only works for people with CCR5-tropic virus. Viral tropism refers to the types of HIV that a person can have, CCR5 (R5), CXCR4 (X4), or Dual-Mix Tropic (R5 and X4). Selzentry blocks CCR5, a co-receptor on the outside of a CD4 cell, and shuts down this point of entry for the virus. Most people are infected with R5 virus initially, and then over time, X4 and mixed viruses may predominate. Blocking R5 with Selzentry does not cause a shift to X4 or negatively affect disease progression or CD4 count in people whose virus can use dual-mix. The tropism test needed is now generally paid for by public health departments, Medicare, and private insurance. ViiV may cover the payment for the Trofile test under certain circumstances.

Selzentry seems to have minimal impact on lipid levels. DHHS guidelines do not recommend the use of maraviroc for treatment-naïve individuals who are pregnant. Anyone who becomes pregnant while taking maraviroc may continue if viral suppression is effective and the regimen is well tolerated. The pharmacokinetics of maraviroc are not significantly altered during pregnancy and no dosage adjustment is necessary. Maraviroc is known to have a moderate level of transfer across the human placenta, although insufficient data exist to evaluate the effects on a fetus. Pregnant individuals can voluntarily enroll in the Antiretroviral Pregnancy Registry through their provider; go to apregistry.com.

The only approved CCR5 inhibitor entry inhibitor, Selzentry is not for initial therapy. It can be helpful, however, for people who have substantial viral resistance and struggle to put together a viable regimen. The catch is that the virus must use the CCR5 receptor and this must be determined by use of a viral tropism test. Selzentry does not work if the virus uses the CXCR4 receptor or a mixture of the two, which is often the case with advanced HIV infection. The drug requires twice-daily dosing, making adherence more challenging, and drug-drug interactions may require dose adjustments. ViiV has announced that the 25 mg and 75 mg tablets of Selzentry will be discontinued as of January 1, 2024.

Selzentry (maraviroc, approved in 2007) is a chemokine co-receptor 5 (CCR5) antagonist. Selzentry is for use only in highly treatment-experienced people, meaning those who have already been on treatment for some time and have virus that is resistant to multiple HIV drugs. Selzentry is one pill twice daily with or without food. Given other available options, it’s hard to imagine why any provider nowadays would recommend Selzentry, even for people who are highly treatment-experienced and have limited treatment options. If your provider recommends Selzentry, they may have a good reason, but make sure they tell you what it is.