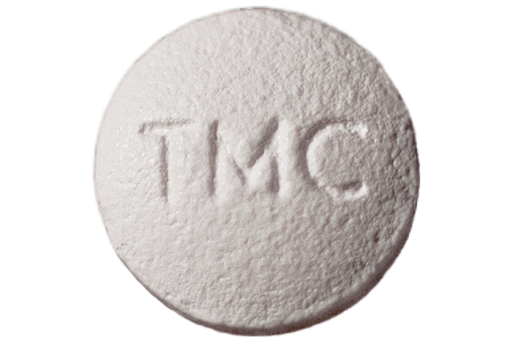 One 25 mg tablet once daily with a standard meal. For adults and children (12 years of age and older weighing at least 77 pounds, or 35 kg) taking HIV treatment for the first time (treatment-naïve). Must be taken in combination with another antiretroviral(s) which does not contain this medication or medication from the same drug class. No dose adjustment needed for pregnant patients with undetectable viral load on a stable rilpivirine-based regimen, but monitor viral load closely because lower rilpivirine drug exposure has been observed during pregnancy.

According to DHHS guidelines, viral load (HIV RNA) should be less than 100,000 copies/mL and CD4 T cell count must be above 200 cells/mm3 before starting Edurant due to higher rates of virologic failure in these patients. The CD4 requirement, however, is no longer on the drug label.

Must be taken with a meal that you chew—not just nutritional drinks or protein shakes, or a light snack. Taking rilpivirine without food could result in up to a 40% decrease in drug absorption and may lead to resistance.

Edurant is a very tolerable medication. Moderate to severe side effects are uncommon. Most common side effects occurring in 3–5% of study subjects were insomnia, headache, rash, and depressive disorders. Stop taking Edurant and see a medical provider right away if allergic reaction or rash occurs with any of the following: fever, trouble breathing or swallowing, blisters, mouth sores, redness or swelling of the eyes, or swelling of the face, lips, mouth, tongue, or throat. Tell your doctor right away if you experience feelings of sadness, hopelessness, anxiety or restlessness, or have suicidal thoughts or actions.

A small study showed a higher rate of depressive disorders in adolescents (19.4%—seven out of 36 youths—vs. 9% for adults), which may or may not have been related to Edurant. Two different studies comparing Edurant to Sustiva showed that both were well tolerated, with Edurant slightly more so. Edurant also has minimal negative effects on LDL (“bad”) cholesterol, total cholesterol, and triglycerides when compared to Sustiva. Edurant improved HDL (“good”) cholesterol slightly less than Sustiva. Liver problems can occur, but are very rare. The risk may be greater for people with a history of hepatitis B or C, but may occur in patients without a history of liver disease. Edurant can cause a small, reversible increase in kidney function test (serum creatinine) within the first few weeks of treatment without affecting actual kidney function.

Edurant cannot be taken with the anti-seizure medications carbamazepine, oxcarbazepine, phenobarbital, or phenytoin; the anti-TB drugs rifampin and rifapentine; proton pump inhibitors (Aciphex, Dexilant, Nexium, Prevacid, Protonix, and Prilosec); or the herb St. John’s wort. Do not take with more than one dose of the injectable steroid dexamethasone (sometimes given in the ER or hospital). Antacids or other products containing aluminum, calcium carbonate, or magnesium hydroxide should be taken two hours before or at least four hours after Edurant. Acid-reducing drugs (Pepcid, Tagamet, Zantac, and Axid) should be taken 12 hours before or four hours after an Edurant dose. If administered with rifabutin, the dose of Edurant should be increased to two 25 mg tablets once daily with a meal. When rifabutin is stopped, Edurant dose should be decreased to 25 mg daily.

Monitor for worsening of any fungal infections when Edurant is used with antifungal medications such as fluconazole, itraconazole, ketoconazole, posaconazole, and voriconazole; dose adjustment for these medications may be needed. Use azithromycin when possible instead of the antibiotics clarithromycin, erythromycin, and telithromycin. Methadone levels are reduced slightly and patients should be monitored for symptoms of withdrawal. Edurant should be used with caution when taken with other medications with a known risk for torsades de pointes or QT prolongation (these abnormal heart rhythms can make the heart stop).

Rilpivirine combined with dolutegravir was approved by the FDA in late 2017; see Juluca. A long-acting injectable formulation of rilpivirine was approved this year along with a long-acting injectable formulation of cabotegravir to form a complete regimen given once a month; see Cabenuva. Edurant is not DHHS recommended for treatment-naïve patients with a pre-treatment viral load greater than 100,000 copies/mL and CD4 T cell count below 200 cells/mm3. The CD4 requirement, however, is no longer on the drug label.

A rilpivirine-based regimen may be advantageous for people with high risk for heart disease due to its relatively low impact on lipid profile. The clinical benefit of these findings has not been demonstrated. While its tolerability and safety profiles are advantages for Edurant, the greater potential for virologic failure in patients with high viral loads, food restrictions, and cross-resistance to the other NNRTIs puts Edurant at a disadvantage for first-time treatment—people may not be able to switch to another NNRTI if their HIV develops NNRTI-resistant mutations to Edurant. Data for use of rilpivirine in combination with an abacavir/lamivudine background are insufficient to recommend at this time. For individuals with HIV-2, commonly found in some other countries, an NNRTI would not be recommended as HIV-2 is inherently resistant to NNRTIs. Edurant can be used during pregnancy, and is listed as a DHHS alternative NNRTI to use during pregnancy in combination with a two-NRTI backbone. According to the FDA, lower exposures of rilpivirine were observed during pregnancy; therefore, viral load should be monitored closely.

Rilpivirine largely replaced Sustiva as the leading NNRTI due to its better tolerability, less frequent nervous system side effects (although depression and insomnia are listed as two of its more common side effects), and a different resistance profile.

Today, it is rarely taken as the branded form, but is commonly coformulated as Complera, Odefsey, and Juluca. In addition, the FDA recently approved a long-acting intramuscular injectable formulation of rilpivirine that is taken with cabotegravir for persons with viral suppression and after a 4 week run-in with oral cabotegravir + Edurant (see Cabanuva).

Rilpivirine should not be used as initial therapy if viral load is above 100,000 copies/mL or CD4 less than 200 cells/mm3 because of higher risk of virologic failure.

Although rilpivirine is generally well tolerated, there are a few important issues to know about in order to maximize success with this drug. For best absorption, it should be taken with a meal. Acid blockers in the proton pump inhibitor category (Prilosec, Nexium, etc.) should not be used. Other acid blockers should only be taken at least several hours before or after the drug. There are a number of important drug interactions with rilpivirine, as mentioned elsewhere on this page, and these should be watched closely, especially when starting and stopping other non-HIV medications.

Kidney stones have been reported with rilpivirine.

Rilpivirine as Edurant can be found currently in two forms, pill and injectable. In pill form, you will need to take it with food. It is found in Odefsey, Complera, and Juluca. The pill form can be complicated, as non-compliance and missing doses can lead to drug resistance, and cross resistance with another medication. The injectable form is contained in Cabenuva, which is once-monthly dosing.