A new probiotics study looks at bringing back those cells that were gone, gone, gone

The CD4 T-cells used by the immune system to protect health don’t just exist in the blood. The gut has its own set of CD4 T-cells, separate from those in the blood plasma.

“Those CD4s that live in the gut get decimated right off the bat, very early, weeks or months after infection,” said Brett Williams, MD, of Rush University Medical Center, in Chicago, “whereas the blood CD4 count doesn’t go down until after a while, over years, and it looks like the gut CD4s don’t seem to recover as well as blood CD4s. So even though I might measure someone’s blood CD4 and it’s up to a thousand, the gut CD4s don’t seem to recover. Around the same time we were learning more about this, about 10 years ago, we started noticing that people with HIV had a leakier gut. So we check their blood and they had more bits of bacteria from the gut—bacterial DNA and bits of the bacterial cell walls—in their blood.”

This “microbial translocation” as it applies to the gastro-intestinal (GI) mucosal cells is known more commonly as “leaky gut.”

Dr. Williams, an HIV specialist, studies the microbiome. A “microbiome” is the environment in which a particular set of microbes live—germs, bacteria, viruses, and so forth. The gut has its own microbiome, which is more and more showing a critical relationship to disease.

Some microbes are like friends, promoting good changes. Others are more like enemies, causing harm. Most people have heard of the “good bacteria” provided by some yogurts, or of nutritional supplements called “probiotics.”

There are thousands of kinds of microbes in the gut microbiome and there’s a long way to go in identifying all of them and figuring out what they do. While some microbes living in the gut are friends, others have been associated with increased risk of heart disease, strokes, allergies, and even obesity.

“I love how it’s all coming together from different sides, the effect of the gut microbes being seen in several diseases,” said Dr. Williams. “Microbes play important roles in many organ systems, and we’re just beginning to understand this physiology. It seems to have a greater effect in HIV.”

He’s a junior member of a team lead by Dr. Adriana Andrade at Johns Hopkins University and Dr. Turner Overton at the University of Alabama at Birmingham working on a study with the AIDS Clinical Trials Group (ACTG), expected to open soon, that will look at the effects of a probiotic. An earlier study had found that using this particular probiotic with HIV antiviral medicine in monkeys infected with SIV (the monkey version of HIV) improved gut CD4s more than using antiretrovirals by themselves. (The ACTG researchers are not receiving compensation from the company that produces the product.) A5350 will look for several effects including a reduced systemic level of immune activation and improved gut CD4 reconstitution.

Immune activation revs up the body like a roaring fire, creating wear and tear in the process. This results in damage which increases the risk of disease, much of it normally seen with aging.

A5352, which is a substudy of A5350, will give study participants a flexible sigmoidoscopy, a procedure usually used to check part of the colon for ulcers, polyps, and cancer. It’s like a colonoscopy, but not as extensive. Biopsy (taking a tissue sample) would be done. The sub-study also looks at gut permeability – or leakiness—using something called a lactulose-mannitol test.

A separate Rush University study is evaluating the differences between the microbes of individuals with HIV and their family members or roommates, to better determine the changes in the microbiome which are caused by HIV itself. Rush is recruiting participants who are just starting HIV medicine.

Explained Dr. Williams, “We have some evidence that some of the bacterial products, such as the short chain fatty acids butyrate and acetate—that these small molecules actually feed the gut cells and turn down inflammation. There are other bacteria that don’t produce those and that may produce other molecules that are actually harmful. These findings are fairly well backed up by studies in people without HIV.

“Even people who’ve had undetectable viral load for years have a different microbiome. It doesn’t get restored to HIV-negative status. That’s what is disturbing to people—that even patients with suppressed viral load still seem to have extra morbidity and mortality not explained by other things like smoking. That’s the driving force behind all these studies,” he said. “Long-term survivors at our clinic who were in studies here long ago experience chronic diarrhea, or intermittent cramping, or chronic loose stools. That may be due to failure of the gut immune system to recover.”

He and his Rush and Washington University colleagues also have a paper in the process of being published that reviews the microbiome studies in HIV which have already been published.

Some of the lack of immune rebound in the gut appears to be due to scarring, or fibrosis in the gut that happens with infection. If the walls of the gut fill in with fibrosis, there’s not much room left for CD4s. This may also contribute to leaky gut, as fibrosis may disrupt the normal structure which evolved to prevent microbes from commuting into the bloodstream from the gut. The ACTG research will look for reduced scarring of the gut, as well as other markers (signs) of disease.

“What really got us interested in going after those leaky guts was two studies in HIV patients that came out in 2014 that showed that all these other diseases, diseases of aging—heart disease, stroke, cancer—were kind of linked to leaky gut,” he said. “The immune activation we found in the blood related to translocation of gut bacteria was closely associated with bad outcomes. So it’s not necessarily AIDS, but what we call non-AIDS morbidity and mortality. They looked back at blood samples from people who had events like heart attacks or strokes and found more evidence of leaky gut and the immune activation resulting from it, compared to those who didn’t.” So, the hope is that microbes can alter the risk of heart disease, diabetes, and other dangers.

Microbes seem to relate to behavior as well as medical conditions. At this year’s CROI (see page 22), Muntsa Rocafort and colleagues reported that in MSM (men who have sex with men) with or without HIV, a positive HIV status had less of an effect on the gut microbiome than being MSM.

That research came about because intestinal “dysbiosis” was found to be different between SIV (the virus in non-human primates) and HIV, raising the question of an effect emanating from behavior. “Dysbiosis” is when the population of microbes is abnormal, such as when it is not diverse enough or when certain microbes are over or under represented.

Dr. Williams pointed to another study showing that when mice with signs of autism were given certain gut microbes, some of the abnormal behaviors went away, although he wondered how autism in mice related to autism in humans.

In two other studies, mice given certain microbes did not develop peanut allergies or they became obese. Microbes may also help control cancer, particularly melanoma.

In the meantime, his patients often ask about the benefits of taking probiotics.

“If people want probiotics, I generally tell them to try yogurt or kefir. People take these supplements every day. I’m not opposed to it, but I don’t know if they will work. So that’s why we’ve got to do a study so we can find out,” he said. “Things like yogurt and kefir also have the added benefit of having the complex sugars that those bacteria need to make those beneficial molecules and to survive on themselves. Those are what we call prebiotics.” 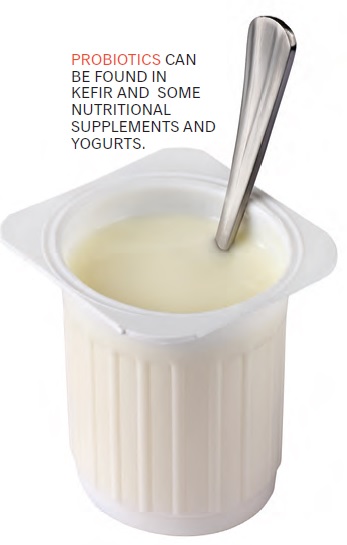 Dietary advice can be complicated, he said. He likes to pass on the suggestion from the activist writer Michael Pollan: “Eat food, not too much, mostly plants.”

As for data on probiotics in HIV, he said none have been comprehensive and they have had mixed results. “Some have shown positive results, improved CD4 count, and reduced inflammation, and some have not really found any difference. They’re all over the place. Some use Lactobacillus, some use Bifidobacterium, some use yeast called Saccharomyces. So it’s a little bit of comparing apples to oranges to tomatoes.”

He noted a lot of data showing the harmfulness of a molecule called TMA, which mostly occurs from the breakdown of animal products, and has been closely linked to heart disease and kidney failure. “After I learned that, I started eating a lot less meat,” Dr. Williams said. Eating meat has also been shown to have a strong connection to colon cancer. In contrast, “the bacteria we think are the good guys break down plant matter and make the good molecules: butyrate, acetate—the short chain fatty acids.”

“We think that if we can reduce leaky gut, we can reduce those bad outcomes: diabetes, strokes, heart attacks, and so on,” said Dr. Williams. He notes, however, that these results, if possible, won’t be immediately available. “It takes five years to do a trial like that. People don’t just have heart attacks every other day, so you have to follow them for a long time to see a difference between treatments. It takes a long time to figure
that out.”

Look for information on A5350 and A5352 at actgnetwork.org. Read about a CROI roundtable discussion on the gut and HIV at scientificamerican.com/article/how-gut-microbiota-impacts-hiv-disease. Watch a webcast of the roundtable at croiconference.org.