Your proofreader goofed! On page 46 of the March+April 2016 edition of Positively Aware, the Ziagen header incorrectly lists “tenofovir disoproxil fumarate” as the generic name instead of “abacavir.” Thought you would want to know.

While POSITIVELY AWARE strives for accuracy, the generic name of Ziagen was misidentified in a heading in the 20th annual HIV Drug Guide. The generic name of Ziagen is abacavir sulfate. Also, the co-pay program for the drug Serostim covers up to $1,500 per prescription, with a lifetime maximum of 12 discounts; call (877) 714-AXIS (2947) for details. We regret the errors.

After the drug guide went to press, two new HIV medications were approved by the FDA, Descovy and Odefsey. Information about the new drugs can be found in Briefly 8.

Thank you for the honor of having our members participate in the POSITIVELY AWARE cover photo [March+April, the 20th annual HIV Drug Guide]. About a dozen or so Being Alive members were able to participate in Louis Carr’s wonderful photo shoot over three locations for PA’s first-ever pullout cover. (Yeah, that’s me in the teal dress shirt!) Thank you also to Rick Guasco for allowing us to participate. Everyone in the HIV field keeps this edition all year long as a reference guide. I know it was physically and emotionally demanding for some of our members, but you wouldn’t know it from the photo. I love our Being Alive client members who are so engaged in their wellness. 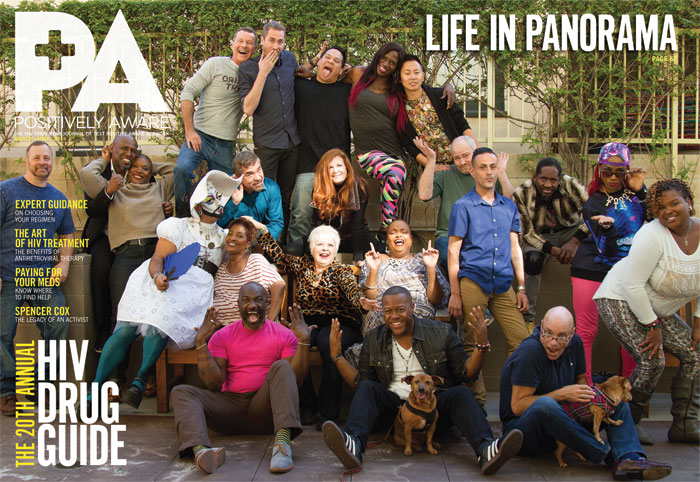 Bless you, Louis Carr, for taking such incredible pics for this magazine. You are one of my heroes! Love to all!

Best cover! One of the issues I look forward to every year from any of the HIV mags.

While at the dentist at Desert AIDS Project today, I went looking for the current POSITIVELY AWARE, and right there on the cover is my fabulous friend and chanteuse Irene Soderberg. I have known her since we both lived in Portland and she had red hair and I had, well, hair. What a great surprise! PA is very important to those who work in HIV/HCV prevention. Your drug guide is a go-to when talking to clients about meds.

I need to get three copies of this issue, since my coworkers kept eyeing my 2015 one in my cubicle.

Jeff Berry does a great, great job as editor of POSITIVELY AWARE. He’s passionate, well informed, and knows how to make every issue both interesting and a learning experience. Huge kudos. 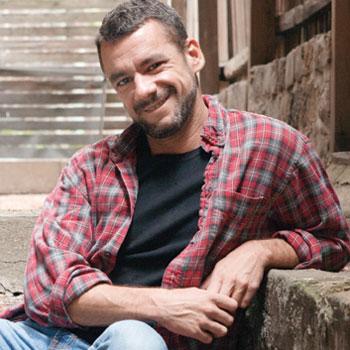 Just read the article about Spencer [“Spencer Cox: The Legacy of an Activist,” March+April 2016]. I loved him so much. We met in ’95 or ’96, and even those first two days are memorable. He asked if he could borrow my blue velvet outfit (he borrowed the jacket). We both had artsy backgrounds, and he also probably felt sorry for me because when I first joined the ACTG community advisory group, I was really ignored or distanced from the “guys.”

He made sure I wasn’t left totally alone. When he went back to school, I sent him a silly book bag and supplies like a kid. It is just heartbreaking to have lost such sweetness. I had spoken to him probably several months before he died, and now of course I wish I had been in touch constantly.

I am an indigent inmate in the Arkansas Department of Corrections (ACD). Myself as well as others have tried to get your publication in the many units of the ADC, but have been denied. The reason for denial is as follows: “It is not the responsibility of the ADC to provide such publications,” as well as “they promote homosexuality.”

I recently had the opportunity to read your magazine via an inmate who is housed in the same unit as I am. I didn’t even know that this magazine existed, let alone available to people such as myself who are living behind the fence, living positively unaware. The articles were very encouraging as well as informative. You have no idea how much of a difference your magazine can make in someone’s life who is living positive in a place like this. Thank you for your great work.

Tales from the inside

I’m an inmate living with hep C. I’m also an openly gay inmate. I was able to get my hands on a few of your magazines. It’s good to know that you are out there supporting us living with HIV, AIDS, and hep C. I love the issues you are addressing in the LGBT community, and within the prisons. I’m a “legal aide” to my fellow inmates and I work within the medical dorms. Being openly gay, I come in contact with a lot of fellow inmates that open up more to me than others. Your magazine has given me a tool to help others as well as myself. The article “Tales from the Inside” [November+December 2015] by Chad Zawitz, MD, at Cook County Jail, was very inspiring to me as an inmate to step up and do more, and as a legal aide to reach out. I look forward to reading more of your magazine and using it to inspire and help others.