The 23rd annual CROI (Conference on Retroviruses and Opportunistic Infections) took place in Boston February 22–25. In addition to abstracts (study summaries) and posters (research reports), many of the presentations, including some highlighted here, are available on video. Visit croiconference.org. Many sets of slides are also available at natap.org. Video capsule summaries are also available at accesshiv.org.

The newest HIV drug on the market, Descovy (FTC/TAF) (see Briefly), is a reboot of Truvada (emtricitabine/tenofovir disoproxil fumarate, or FTC/TDF).

A prodrug is a medication that becomes metabolized (processed in the body) as the active drug, in this case, tenofovir. By itself, tenofovir does not get effectively used by the body.

The new version also contains emtricitabine, but changes out the TDF for tenofovir alafenamide, or TAF for short.

While TDF is associated with potential kidney and bone toxicity, TAF is known to be easier on kidneys and bones than TDF, thanks to lower blood levels.

As usual, data were presented that looked at how people living with HIV fare when they switch over to a new drug.

Participants in Study 311-1089 kept their viral load undetectable when they switched to a regimen containing FTC/TAF from one containing FTC/TDF. Previous switch studies with TAF only looked at switching to Genvoya (which contains TAF).

Half of the 660 participants in this study were kept on their FTC/TDF-containing regimen and half were switched to one with FTC/TAF. Through 48 weeks, most patients maintained virologic suppression (viral load under 50, or undetectable). Ninety-four percent of the TAF takers had undetectable viral load compared to 93% of those kept on TDF.

As expected, kidney and bone toxicities were less with TAF. Proteinuria measures improved and bone mineral density increased in the group taking F/TAF (as it was called in the presentation), but not for the participants kept on F/TDF.

Similar results were seen earlier in Phase 3 studies on switching to Genvoya; there were fewer kidney and bone toxicities with TAF than with patients continuing to take TDF.

Participants switching to a boosted medication regimen (one containing cobicistat or ritonavir, such as Prezcobix or Stribild) used 10 mg TAF. Those not taking a booster drug used 25 mg of TAF.

Joel Gallant, MD, MPH, of the Southwest CARE Center in Santa Fe, presented the Study 1089 results. The study is continuing out to 96 weeks.

A two-drug combination injected intramuscularly every 4 or 8 weeks successfully treated HIV in a clinical trial. Many patients and providers alike eagerly anticipate a medication like this that may help improve treatment adherence and results. Others are skeptical.

All 309 participants first received oral HIV therapy for 20 weeks with Epzicom plus cabotegravir, an integrase inhibitor still in development. At the end of the 20 weeks, they were put into one of three groups: either receiving an injection containing cabotegravir plus rilpivirine once every four or eight weeks or kept on the oral medications.

Rilpivirine is available under the brand name Edurant, and is found in Complera and the recently approved Odefsey (see Briefly).

As reported in the January+February Briefly (see link to press release for more information), 95% of the people given an injection every 8 weeks and 94% of those receiving an injection every 4 weeks maintained their undetectable viral load through 32 weeks. This compared to 91% of those kept on pills.

Injection site reactions, mostly pain, were common, seen in 92% of participants, but 99% of them were considered mild (82%) or moderate (17%). The reactions continuously decreased over time, and according to the presenter, 90% of them resolved (went away). When surveyed, patients reported a much higher level of satisfaction with the injection compared to the oral pill used in the induction phase of the study.

There was a two-week flexibility in receiving an injection, either a week earlier or a week later than scheduled. There was also “oral bridging,” in which injection participants could get pills at the pharmacy if they couldn’t come in for a shot.

David A. Margolis, MD, presented the Phase 2b LATTE-2 study results on behalf of ViiV Healthcare, the maker of Epzicom, Tivicay, and Triumeq. Janssen Pharmaceuticals is the maker of Edurant. 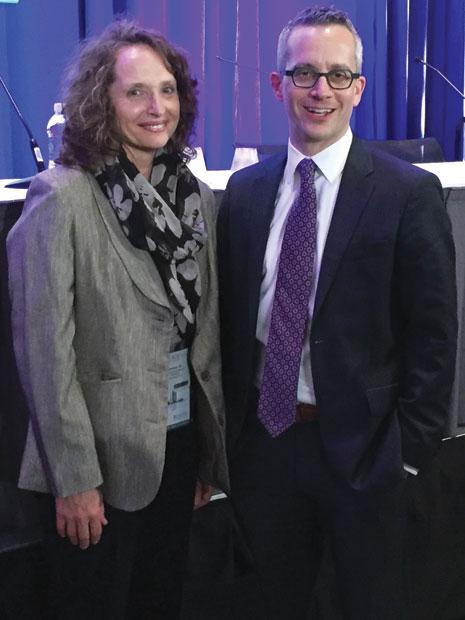 For the first time, research showed that vaginal rings could protect women against HIV. These rings, made of silicone, are soft and flexible, and can be inserted by the women themselves.

“The ASPIRE study is the first to demonstrate that a sustained drug delivery product that slowly releases an antiretroviral drug over time can offer partial protection from HIV,” said Thesla Palanee-Phillips, PhD, of the Wits Reproductive Health and HIV Institute in Johannesburg, in a press release. She led the study along with presenter Jared Baeten, MD, PhD, of the University of Washington in Seattle.

A separate trial, The Ring Study, found a 31% reduction in HIV infections overall, but a slightly greater reduction, 38%, among women older than 21.

The two studies ran side by side to speed up commercial availability, if successful. The FDA requires two large, Phase 3 studies for approval. The National Institutes of Health (NIH) funds ASPIRE, conducted by the Microbicide Trials Network (MTN), while the Bill and Melinda Gates Foundation funds The Ring Study.

Both rings contained the anti-HIV medication dapivirine, which is only available in a research study. A ring was inserted once a month in the clinic and provided anti-HIV protection throughout the month.

ASPIRE (A Study to Prevent Infection with a Ring for Extended Use) enrolled 2,629 women in four African countries (Malawi, South Africa, Uganda, and Zimbabwe). In addition to a new ring, the women received HIV testing and risk reduction counseling each month. The average follow-up was 18 months, but some women had follow up as long as three years.

The Ring Study enrolled 1,959 women in South Africa and Uganda. At the time of the report, 761 women had completed two years of follow-up.

“HIV incidence was reduced by a third overall and by more than half among a subgroup of women who appeared to use the ring better,” Baeten said in a press conference. “With the Ring Study, which replicates these results, these are important steps in developing new HIV prevention options for women.”

For more information, go to the MTN website, mtnstophiv.org. MTN includes a link to the full ASPIRE study as published online in The New England Journal of Medicine (NEJM) on February 22.

A single case of HIV infection while on PrEP reported

Advocates and providers warn that HIV prevention with a pill “doesn’t work if you don’t take it.” For the first time, there was a documented case of HIV infection in someone shown to be taking anti-HIV medication as directed. What happened?

The 43-year-old man in Toronto taking PrEP (pre-exposure prophylaxis) was found to be infected with HIV that was highly drug-resistant. It appears that this drug-resistant virus was able to overpower his Truvada, which is currently the only medicine available for HIV prevention.

The virus that infected him, however, did not have the usual drug resistance pattern seen when the two drugs in Truvada can no longer control HIV. It did not contain the more important of the two mutations that most commonly confer resistance to the Truvada. Go to AIDSmap for an easy-to-read report on the complicated topic of drug resistance, as discussed in this case presentation; go to aidsmap.com/Almost-certain-case-of-PrEP-failure-due-to-drug-resistance-reported-at-CROI-2016/page/3039748/.

The transmission of drug-resistant HIV is not new. It’s been discussed for more than a decade, often in the context of two people living with HIV—if one sex partner’s drug-resistant virus is transmitted, could that cause the other partner’s therapy to fail?

Yes and no. Mostly, this idea has ceased to be of major concern.

Cases of highly-resistant virus being transmitted, fortunately, have been rare. This was one such case.

In addition to being rare, it’s also fortunate that HIV drugs and drug classes approved in the last several years may be able to beat down drug-resistant viruses.

That’s what happened with this patient. He was put on HIV treatment within two days of his infection being confirmed. Norvir-boosted Prezista and Isentress were added on top of his Truvada. His viral load was undetectable within three weeks.

Later, after tests came back from the lab that detailed the pattern of his virus’s drug resistance, he was switched to another HIV regimen—Prezcobix, Tivicay, and Edurant. He has continued to be undetectable.

Obviously, however rare the acquisition of highly resistant virus may be, it can happen.

The Toronto patient told a reporter for POZ magazine, “PrEP didn’t work for me, but I still think it’s great.” He also said that the man from whom he acquired HIV had told him he was HIV-negative. Read the interview at poz.com/article/meet-man-got-hiv-daily-prep.

View the presentation of Dr. David C. Knox, of the Maple Leaf Medical Clinic, on this case at croiwebcasts.org/console/.player/29737?mediaType=audio&. 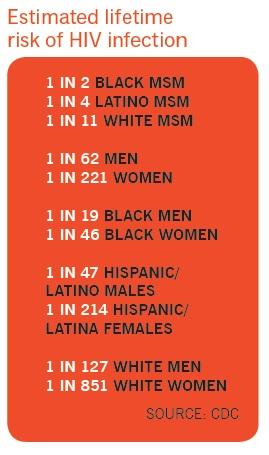 Half of black MSM predicted to acquire HIV

The Centers for Disease Control and Prevention (CDC) provided estimated lifetime risk of HIV infection for both the general population as well as subpopulations.

Although the overall estimated risk of acquiring HIV infection has decreased from the agency’s last report, increased risk was highest for black MSM (men who have sex with men): one in two.

Kristen Hess of the CDC reported that the new estimates were compiled from HIV surveillance, census, and mortality data collected from 2009 to 2013. The previous estimates were from a decade ago. Moreover, the CDC now has data from all 50 states, which it previously did not.

For the country as a whole, the risk of becoming infected with HIV is estimated to be 1 in 99 persons, as opposed to 1 in 78 individuals previously. 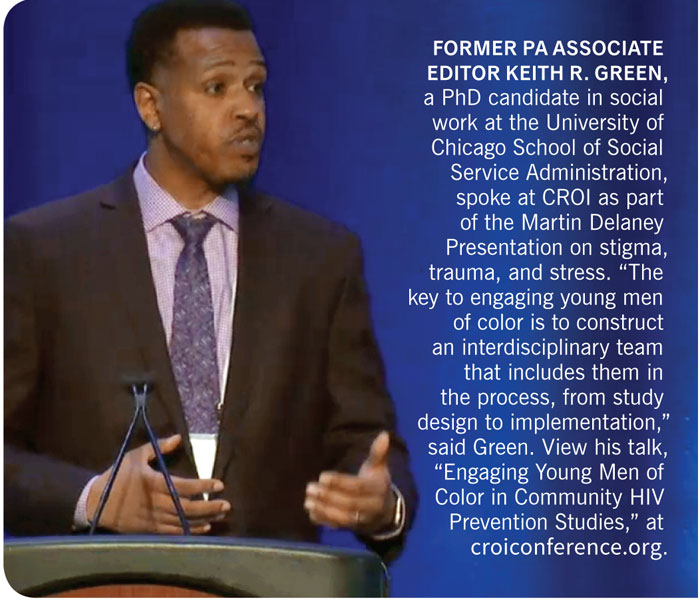 “However,” said Hess in a press conference, “there are vast disparities that still persist. African Americans and Latinos face higher risks than whites. And MSM have a risk of 1 in 6. That’s a much higher risk than heterosexual men, whose risk is 1 in 473. And black MSM are particularly high risk, with a risk of 1 in 2.

“It was already known that these groups account for the largest proportion of HIV diagnoses,” Hess continued. “But presenting it in this manner can more effectively communicate the level of risk and large disparities to the general public. So this is a useful tool for clinicians, outreach workers, and policy makers.”

The risk for Latino MSM is 1 in 4 and for white MSM, 1 in 11. The CDC also reported risk on a state-by-state basis.

“As alarming as these lifetime risk estimates are, they are not a foregone conclusion. They are a call to action,” said Jonathan Mermin, M.D., director of CDC’s
National Center for HIV/AIDS, Viral Hepatitis, STD, and Tuberculosis Prevention, in a press release. “The prevention and care strategies we have at our disposal today provide a promising outlook for future reductions of HIV infections and disparities in the U.S., but hundreds of thousands of people will be diagnosed in their lifetime if we don’t scale up efforts now.” Read the release at cdc.gov/nchhstp/newsroom/2016/croi-press-release-risk.html.