How unrealistic thoughts keep people away from medical care

Two bars. There have never been two bars before in the 200 or so HIV tests I had previously given.

About half an hour after an oral swab is taken, one red bar will show up, meaning the person tested negative for HIV. I tell people that they should get tested again in three months to make sure, since the test might not be able to pick up enough HIV antibodies to test positive if the patient contracted the virus in the last 90 days.

But this time there were two bars, meaning that there was a 99.98% chance that the person was HIV-positive based on this particular test.

As I walked to the curtained-off room in the ER where the patient was sitting, my mind played out possible reactions. Crying was fine. I could respond to crying and, hopefully, that flood of emotion would be coupled with acceptance of his HIV status and a willingness to get into medical care. Anger and denial were more negative responses, but I had been trained to deal with them. The concern wasn’t that the patient would lash out, but that he might bolt out of the ER and away from care.

I didn’t get any of the reactions I expected. Instead of tears or rage or disbelief, the young man responded nonchalantly, with a hint of disappointment. It was as if he had just lost $10 playing scratch-off lottery tickets at the gas station.

My supervisor, who had joined me when I delivered the results, asked the young man, who had already slung his backpack over his shoulder, if he had ever tested positive for HIV before. He said that he had—a couple of times. When I asked him why he had told us during our initial discussion that he had not previously tested positive, he answered, quite correctly, that it was because we wouldn’t have given him the test if he told us that he had.

I was thoroughly confused. Why, I thought, would a young man who had already been told on multiple occasions that he was HIV-positive go through all the trouble of hiding his status from us in order to take another HIV test when he knew what the results would be?

My supervisor, however, had no trouble understanding the motivations behind the patient’s actions. He had been living well with HIV for more than a decade and when first diagnosed, had done much the same thing this young man just did.

“He was probably just checking to see if it had gone away,” my supervisor told me. “It happens more than you might think. When you’re having trouble accepting the fact that you have HIV, your thoughts can take you all kinds of places. You go long enough after being diagnosed without any major problems and get to thinking that maybe you don’t have what they say you have. Maybe the test was a false positive or your body got rid of the virus somehow. You can make yourself believe a lot of things when you don’t want to have HIV.”

That afternoon, four years ago, was my first introduction to the power of magical thinking in HIV, and the ways it can disrupt the best laid plans to link people who are HIV-positive to medical care. 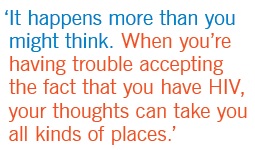 As the name suggests, magical thinking embraces objectively irrational or fantastic beliefs reinforcing the idea that the rules and scientific facts governing empirically validated experiences do not apply to one’s self or, in some cases, to a loved one.

While HIV magical thinking is a form of denial, it is more complex than simply refusing to acknowledge a positive HIV test result. Those who refuse to accept the fact that they are HIV-positive are unlikely to engage with HIV health care providers after receiving their diagnosis, but people who get caught up in magical thinking appear at all stages along the continuum of care.

In the case of this young man, his magical thinking manifested itself in the belief—or perhaps the faint hope—that the HIV detected on multiple occasions would have somehow gone away between his last test and the one I gave him. >>

At first glance, it might seem as if the testing encounter was a waste of resources. However, the test we performed wasn’t so much about the results as it was about giving us another opportunity to connect with someone who was on the edge of becoming willing to engage in care.

In fact, before he left the emergency room that day, my supervisor was able to schedule an appointment for him with an infectious disease doctor on the following day. I couldn’t tell you if that young man ever showed up for that appointment or if he’s in care now, but I can say that the encounter we had probably caused him to at least consider reevaluating his thinking around his HIV diagnosis and provided him with some tools with which to do so.

HIV-related magical thinking can be as prevalent among those who have been in care and on antiretroviral therapy as it is among those who choose not to seek help. The number of people who have been diagnosed with HIV, linked to medical care, and then lost to care is very similar to the number of people who were diagnosed but never linked, with each group representing roughly 1 out of every 5 HIV-positive people in the U.S., according to the CDC.

What this suggests is that it is just as hard, if not harder, to retain someone in HIV care as it is to get them connected to care in the first place. And, while there is a plethora of reasons why an HIV-positive person might be lost to care, I believe that one of the biggest reasons is this sort of magical thinking.

The most notable and bizarre public manifestation of HIV-positive magical thinking in recent years happened in January when actor Charlie Sheen followed up his public announcement that he was positive by going on The Dr. Oz Show and revealing that he had stopped taking his antiretroviral medication in favor of seeing a discredited doctor in Mexico. The doctor claimed to be able to cure HIV with goat milk and, allegedly, injected himself with Sheen’s blood in front of him.

The combination of Sheen’s celebrity, money, and history of mental health and substance abuse issues may have made his version of magical thinking more sensationalistic than most, but the impetus for his actions and his perception of risk probably weren’t much different from that of thousands of HIV-positive people in the U.S. who think their way out of care each year.

I have known people living with HIV who were doing well, were adhering to their antiretroviral therapy, were virally suppressed and who then, for all intents and purposes, dropped off the face of the earth. And, a few months or a few years later, when I finally saw those people again, I found myself talking with someone who was sick, but refused to acknowledge it. They railed against Atripla and Truvada and Stribild as “poison” while telling me about the great new herbal therapies they were on. They said that they were cured or that the HIV test they took way back when was defective and that they had been HIV-negative all along. Others were in a serodiscordant relationship but had condomless sex with their partner because they were convinced that you couldn’t contract the virus by sleeping with someone you truly loved.

All of these are examples of magical thinking. The reasons for the ubiquitousness of this sort of thinking are many and varied, but, ultimately, the simplest explanation for it is the fact that we’re human.

Until there is a cure for this virus, there aren’t enough pharmacological advances in the world to alter the reality that living with HIV is hard. HIV is a chronic disease that takes a toll on both the mind and the body. Without a sound support network and a good relationship with an HIV service provider, it is all too easy for someone to drop out of touch and out of care.

Without solid HIV outreach, post-test counseling, and linkage to care, it’s not hard to see why tens of thousands of people get diagnosed and then vanish. As it is with most things that cause us pain and distress, many of us would rather exhaust every illogical rationale and supposed silver bullet cure (denial and magical thinking) than accept not just a diagnosis, but the hard reality of the decisions that must be made in order to take care of ourselves once a diagnosis is accepted as being true.

At present, two-thirds of HIV-positive individuals in the U.S. who have been diagnosed are currently not in care and, out of that two-thirds, I’m guessing that there is a sizable subgroup of people whose failure to get into and remain in care can be traced back, in part or in whole, to magical thinking.

Thus, the question arises: how do we go about eliminating these harmful thoughts and replace them with thinking patterns that promote consistent engagement with HIV service providers and healthy mechanisms to cope with the day-to-day realities of being positive?

There is no easy answer, but each and every time HIV providers have contact with someone who is positive, they have an opportunity to provide them with support and the reassurance that, regardless of where the person is at, they are willing to meet them there.

Should, as was the case with the young man I discussed earlier, an HIV provider encounter someone who is struggling to come to terms with the reality of their diagnosis, they need to do all they can to listen to and appreciate that person’s concerns, no matter how fantastical they may seem. If giving an HIV test to someone who has already been diagnosed is the opening the person provides us to help them deal with their fears and reassure them about the benefits of being in care, then we need to give it because the cost of a seemingly superfluous OraQuick test is nothing compared to the cost of rejecting a client’s roundabout invitation for us to help them.

It is exceedingly difficult to disabuse a person of any sort of magical thinking with reason and fact alone, since those are the very things such thoughts were designed to deflect. Yes, it is vital that we equip people living with HIV with the knowledge and the resources to make the decisions that are best for their overall well-being. Sometimes, it’s just as important to provide them with a safe space where they can verbalize and explore all of the magical thinking that might lead them to decisions that are not.

Drew Gibson is a social worker and freelance writer based out of Cincinnati, Ohio. You can follow him on Twitter at @SuppressThis or visit his blog “Virally Suppressed,” which covers a multitude of issues related to public health and social justice. (References available online.)