An advocate looks at making the case to congress for AIDS funding, then and now

The last time I was in Washington, D.C., advocating for AIDS funding and legislation was 1990. A group of us gathered from across the country to advocate for the first Ryan White CARE Act. I’d lobbied in Springfield, Illinois and Chicago, but never on the Hill. It was intimidating and exhilarating and exhausting.

Even when I was in D.C. for the U.S. Conference on AIDS last September, I didn’t plan to come back for AIDSWatch. Why should I? Can’t someone else do it instead?

But there I was at the end of February, picking up my badge and feeling a little alone. The only people I knew were Ed Barron and Mark S. King.  I knew no one else in my state delegation, for Illinois. I didn’t feel alone for long.

The demographics were certainly different this time around. In 1990, most of the attendees were white gay men. As a woman, I definitely stood out. This time the diversity of over 350 attendees from 35 states, Washington, D.C., and Puerto Rico was exciting. Given the disproportionate impact of HIV on people of color and transgender women, it was inspiring to see these communities so well represented. The other difference was the diversity in the Illinois delegation. On my previous visit, Illinois was represented by Chicagoans. This time we had members from around the state.

Last fall I was at an author fair at the Princeton, Illinois, Public Library. Two people I spoke to at my table were involved in HIV/AIDS treatment. Yeah, in Princeton, just off I-80, due north of Peoria. Not Chicago, not even East St. Louis: Princeton. Rural representation at AIDSWatch was critical in many ways and I was pleased to see that “downstate” was not forgotten.

Monday, February 29, was spent getting everyone up to speed on why we were there. These were our four “asks”:

As you can see, very specific requests. For me, the last item—increased funding for NIH—is most important. You don’t take your foot off the gas pedal when you’re close to the finish line: you floor it. Pitting AIDS against cancer or Alzheimer’s to compete for funding is immoral. We need to ensure that this epidemic doesn’t last one day longer than it should. And if there’s one thing the AIDS community is good at, it’s putting pressure on the powers that be.

Every delegation had specific issues and ours was the impact of the state budget stalemate. For us in Illinois, federal funding has taken on a new urgency. Social services have already been gutted from lack of a state budget for the current year, so continued or increased federal funding is critical.

AIDSWatch is a partnership between AIDS United, the Treatment Access Expansion Project, and the U.S. People Living With HIV Caucus. On Monday night, after the training breakout sessions, a reception was held at the Rayburn House Office Building. AIDSWatch presented Positive Leadership Awards to Rep. Barbara Lee and the family of the late Senator Frank Lautenberg. The Elizabeth Taylor AIDS Foundation, presenting sponsor for this year’s AIDSWatch, hosted the reception with Taylor’s family members in attendance.

They were not just there for photo ops: they spoke to the media and headed up to the Hill the next day for their own appointments. The commitment of Taylor’s grandchildren—and one great-grandchild—is impressive. I’m sure she’d be proud that they’re determined to carry on her amazing legacy. And though I didn’t get a chance to speak to any of them, I did have a lovely conversation with Kate Burton, her stepdaughter and one of the foundation’s most passionate ambassadors. (See “Ambassador Kate,” January+February issue.)

Unlike 26 years ago, when we scheduled our own appointments, AIDSWatch 2016 handled this. On Monday afternoon state delegations gathered to find out who we were meeting and when. The entire Illinois delegation met with aides to Illinois U.S. Senators Dick Durbin and Mark Kirk. Then we were placed in smaller groups for the numerous House representatives.

I was in the group to see Rep. Mike Quigley (my former Congressman) and Rep. Luis Gutierrez (whose district I was gerrymandered into). We were able to meet with both of them, though with Gutierrez we shared time with the Puerto Rican delegation. Unlike the comfort of Quigley’s office, we all stood in the hallway (just like the original lobbyists). But we made our points.

I thought a lot about those two days as I headed up to New York on the Northeast Regional Amtrak route. And I realized what the biggest difference was between 1990 and 2016: hope. In 1990 we were lobbying for the first Ryan White CARE Act, and to ensure that the new Americans with Disabilities Act (ADA) included people living with AIDS. In 1990, Senator Ted Kennedy explained he could not co-sponsor bills because there were senators who would vote against them just because his name was on them. Even one of my senators, Paul Simon, didn’t want to vote for anything that would add to the national debt. I couldn’t even get a meeting with one of Sen. Alan Dixon’s aides.

“All at once, we found ourselves surrounded by advocates whose stories described years of passionate discussions with elected officials at all levels, whose decisions affect the daily lives of Americans living with HIV or at risk for acquiring HIV.

“By the time our Chicago delegation met with our congressional leaders, we were each ready to describe how important legislation is that funds essential HIV support services and ensures people living with HIV are free from institutional discrimination.

“We were greeted by an encouraging amount of support from our congressional leaders. Meeting after meeting, our officials and their staff reaffirmed their commitment to an AIDS-free generation.”

This time, I didn’t feel the same kind of frustration I felt in 1990. Oh, I’m frustrated, all right, frustrated that we’re still fighting the epidemic all these years later. But this time around we can see the light at the end of the tunnel. People are living with HIV and undetectable. Undetectable!

That wasn’t something we dared dream about then, but today it’s a reality. We’re so close, so close to a cure, so close to an AIDS-free generation. But we can’t do it alone.

We need to eliminate laws that criminalize HIV, and increase funding for research, education, and needle exchange programs and testing centers. In 1990 we had very few tools in the toolbox. Today it’s overflowing. But we can’t do it alone.

You don’t need to spend two days in Washington to help. Follow AIDS United or your state’s advocacy groups. Find out what’s going on in your city, county, and state. Find out what committees your representatives serve on and e-mail or call them about bills coming before them.

Then, share what you’ve learned on social media. Talk to your friends and family and medical professionals. Write op-eds or letters to the editor. The battle to end AIDS should not be a secret. It should be shouted from the rooftops that we are so close to ending the epidemic.

Because today, more than ever, there truly is hope. 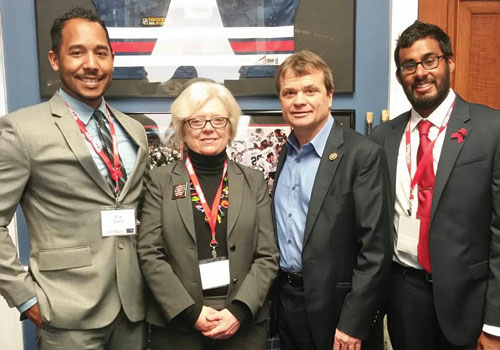 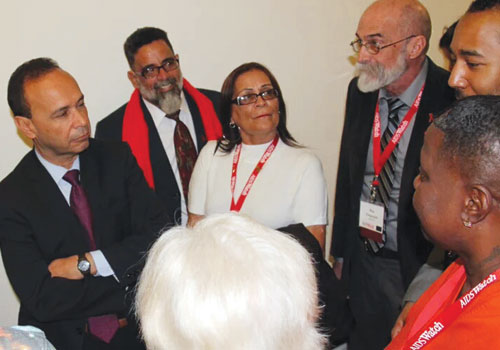 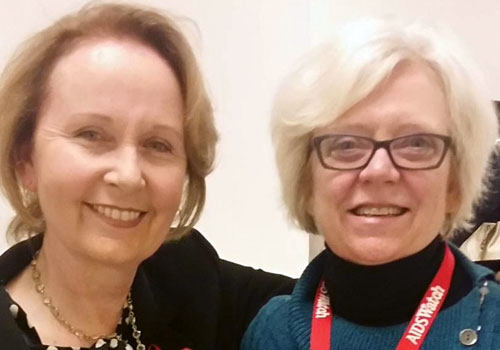 Victoria Noe is the author of the Friend Grief series and the forthcoming Fag Hags, Divas and Moms: The Legacy of Straight Women in the AIDS Community (coming in 2017). Her essays have appeared in A&U magazine (2016 Christopher Hewitt Award for Creative Nonfiction), Chicago Tribune, Windy City Times, and The Huffington Post. A former fundraiser in the AIDS community of Chicago, she is now an advocate and member of ACT UP/NY. Her website is victorianoe.com.