Reconnecting With Her Community

Feeling free with the Ride for AIDS Chicago

It’s 9 p.m. on a Wednesday night in March, and Christina is packing away a laptop, her notes, and the remaining transit cards not taken by members of her Treatment Education Adherence Management (TEAM) group. TEAM, a three-week-long educational course that covers HIV basics, HAART therapy, and managing diagnoses, is one of the four groups Christina facilitates at Test Positive Aware Network (TPAN), publisher of POSITIVELY AWARE. Despite being at the end of a long workday and group session she’s energetic, which could be because she’s missed a cycling class. In addition to Christina’s groups and meeting weekly with 15 therapy clients, she’s cycling with Team TPAN in the 2016 Ride for AIDS Chicago (RFAC).

“We hold TEAM quarterly. This session’s in the evening to encourage participants from all walks of life to join us,” Christina says as she straightens chairs. In the spring, that conflicts with RFAC’s indoor training. “I'm missing spin, but this is more important.”

Christina is precise in her word choice and considerate as she listens. She has the thoughtful composure of a therapist, though she is quick to break into good-natured laughter. In previous jobs and among friends, she was known for her ability to mediate conflict and serve as a go-between for people with differing opinions. Christina’s work at TPAN is the right fit; it’s also a return to a cause that’s personal.

“I think I’ve been preparing for this for a long time without really knowing it,” she said. Diagnosed with HIV in 1988 at the age of 15, Christina spent most of her teen years dedicated to HIV advocacy and educating others. “I was given 10 years to live when I was diagnosed, so, whatever I could do, I did.” She threw herself into the HIV community with a determination to make a difference while she could, visiting schools with a group of HIV-positive youth and participating in drug trials: “Even if the drugs were toxic, I thought ‘Who cares? I’m not going to be around and I’d rather be useful for whoever else is after me.’ ”

Finding herself still alive at the 10th anniversary of her diagnosis, and realizing she would continue to live, “was confusing. It was a bit of a shock and I pulled away from the community.” She studied psychology in college and “planned on being a therapist, but felt I was so messed up at the time that that would be unethical. I was interested in doing it for me, to figure out my own problems rather than helping others.”

Christina graduated college and took a sales job at a trading company where she advanced quickly. The corporate job came with a large salary and other perks, but, “I felt a big hole in my life. HIV and my participating in anything HIV-related was non-existent. It was circumstantial, but also me not wanting to deal with my own status. I did read Positively Aware and POZ when I saw them at the doctor’s office, but I was completely isolated from other HIV-related things and people.” After 13 years, the company closed and Christina faced a choice: go on to another unfulfilling sales job or take a risk on another career. 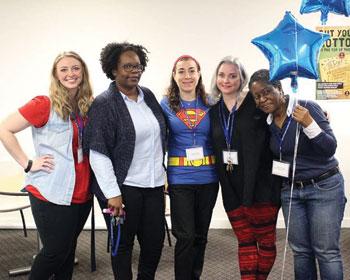 Christina found her answer in a Master’s of Science in Counseling, a therapy internship at TPAN, and eventually a job at the Chicago agency. “I was looking for a way to put meaning into my life. I knew I didn’t want to be just a therapist. I wanted to reconnect with my HIV community. In 13 years at my old job I only told one person I was HIV-positive. Thirteen years of working with people and I still didn’t feel comfortable telling them. At TPAN, I knew there wouldn’t be an issue with me telling people.” That outlook of self-realization is central to Christina’s therapy sessions with clients. “The ultimate goal of therapy, HIV-positive or not, is to support clients in finding the path to live their best life, whatever that means to them. Having therapy available at TPAN means they can expect a safe non-judgmental space where they are able to explore and grow.”

After an internship in 2014, Christina joined TPAN as a full-time therapist in 2015. In addition to TEAM, she leads herVoice and Future Focused, therapy groups focused on women living with HIV and those newly diagnosed. “It’s not just being a therapist, but it’s being a therapist in this particular field that’s making it the most fulfilling thing I could imagine. That hole I was feeling years ago, this is what was missing.”

Christina quickly learned about another way to participate in TPAN’s mission: The Ride for AIDS Chicago. Held each year, RFAC is the agency’s signature fundraising event, raising funds for HIV services, including TPAN’s therapy programs, and combating the stigma associated with HIV/AIDS. Christina thought she “couldn’t be at TPAN and not participate. The Ride felt like a natural evolution to me being here and being part of the HIV community. I was so happy with the response I got at TPAN to being open about my status, doing the Ride felt like the natural extension, not only to supporting other people but to supporting myself: I’m not going to live in the shadows any longer.”

For the first time in my life, 27 years of being positive, the Ride was the first time I felt I could be 100% myself. Even more than working at TPAN...it was such a feeling of freedom that I’d never experienced before in my life.

Christina rode in 2015 and described the experience as “overwhelming.” An endurance athlete who had run marathons and completed several cross-Iowa bike rides, she said that RFAC was different. “It’s not only a physical challenge, it’s an emotional challenge. While I train and ride, I imagine all the people who didn’t make it. I didn’t know a ton of positive people when I was younger, but I definitely lost some friends. There are a lot of people who wanted to be here and aren’t. I’m still here and I’m able to ride with their memories, or in their memory, whether I knew them or not. For me, it’s not about raising money, although we are. It’s about making a statement.”

“Christina’s range of advocacy is powerful,” shared Jessie Mott, who co-facilitates TPAN’s art therapy group with Christina. “She’s soft-spoken with a strong presence. Many of the group members know that she also cycles 200 miles each year, which is so inspiring to all of us.”

As she prepares for her 2016 ride, Christina reflects back on the most memorable portions of her first ride, the tradition of HIV-positive participants wearing orange bandanas to signify their status. “One of the things I’ve thought about my whole life, since I’ve been diagnosed most of my life, there’s a part of me that wished I could just wear a button that says ‘I’m HIV positive’ and everyone would know and disclosure wouldn’t be an issue. The orange bandana is kind of that button. Even though you’re around a bunch of positive people and negative allies who aren’t going to judge you, it’s still very scary.”

That fear speaks to the extent to which those who are positive have internalized HIV stigma. Events like RFAC strive to demonstrate that there is no shame in one’s status. “For the first time in my life, 27 years of being positive, the Ride was the first time I felt I could be 100% myself. Even more than working at TPAN. To be able to walk around for two days wearing that bandana and to have everyone know, it was such a feeling of freedom that I’d never experienced before in my life. And you take part of that with you. You pack it back up and go back to your life. But I know I get to unpack it again this year. And I hope that each time unpacking it, it can stay out a little longer, or that I don’t need to hide it again.”

As it has for many other participants, the RFAC has become a vital part of Christina’s life. “I couldn’t not ride. I would miss the community and that big emotional hug; that’s what it is, two days of emotional hugs. Imagine one of the best days of your life, that’s the feeling you’ll get out of doing this. I feel like I’m supposed to be there, and as long as I can do it, I will do it.”

As Christina packs away the rest of her supplies she comments, with a smile, “this was the last meeting of this TEAM cohort. I’ll be back at training next week.”

The 13th Annual Ride for AIDS Chicago will be held July 9–10, 2016. To participate or sponsor a participant, go to rideforAIDS.org.

Gary Nelson is the Events and Communication Manager at TPAN.