Something More Important Than Fear

My journey back to treatment 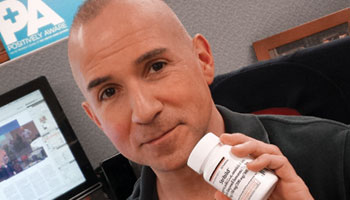 Last October, I came out. Everyone who knows me was surprised. Although I’ve been openly gay most of my adult life, and I’ve been HIV-positive since 1992, I have only been on treatment for a very short time. Three years ago, I fell out of care completely and was no longer on meds.

You’d think I would know better. I’m a fairly intelligent person, even if admittedly opinionated and stubborn. Plus, I work for an HIV treatment magazine, so I’m aware of the importance of—well, HIV treatment.

Except that I had become tired and afraid. I think that as long as I have lived with HIV, I’ve always lived with some measure of fear. It didn’t matter how healthy I was, or how sick I felt, fear has always lurked in the background.

In the summer of 1992, I developed blotches on my skin. I had never been tested, and I was afraid what an HIV test would reveal. The purplish spots continued to blossom, about five new ones a week. When the fear became too much, I got tested that December: I was HIV-positive—and the spots were likely Kaposi sarcoma (KS), an opportunistic infection that the Centers for Disease Control and Prevention had labeled as an “end-stage AIDS-defining illness.”

“Good luck,” my post-test counselor said as he handed me three publications.

The fear of KS was over-whelming. So many had died of KS in the dark days of the early 1980s, and it seemed I was next. More than 100 lesions covered my body, 50 on my head alone. I looked like I had two black eyes and a swollen lip.

I was numb as I started to review my new reading materials. One of the three handouts was an issue of POSITIVELY AWARE, the other two were also published by Test Positive Aware Network (TPAN). The more I read, the more my fear gradually subsided to a level where I could start to think. That was when I realized information was the key to getting a grip on my situation.

Kaposi sarcoma is a disease in which malignant tumors can form in the skin, mucous membranes, lymph nodes, and other organs. Chemotherapy was the standard treatment for KS, but it often killed the weakest patients. I had a boyfriend who stuck by me during this time. He told me how his uncle had died, not from KS but from the chemo he had received. My boyfriend said he was damned if he was going to see another person he loved die the same way.

Let’s just says his insistence inspired me to find another course of treatment.

I learned about a clinical trial that used interferon, a known cancer-fighting drug, alongside a recently approved HIV medication, to treat KS. This early form of the HIV drug was a horse pill that tasted like chalk. Worse, it made everything else taste like chalk. Even pizza. I lost my appetite, and within a month I lost nearly 15 pounds. My doctor was so worried about my weight loss, she allowed me to drop the HIV med.

Interferon was a different story. I’m so afraid of needles, it took more than two weeks before I could bring myself to begin the daily course of a self-administered injection into my upper thigh. Whenever I jabbed myself, I always closed my eyes and looked the other way.

Imagine having the body aches of the flu—every day. That was the major side effect of interferon. At its worst, I would rock back and forth at my desk, like someone experiencing withdrawal. If I skipped a dose, the following night would bring wild lucid dreams, repeating themselves like a broken record throughout the night. But the interferon worked. Within two years, nearly all the lesions disappeared.

In 1997, protease inhibitors, the first class of effective HIV drugs, appeared. But soon afterward, HIV patients began to report side effects from the long-term use of HIV medications and from having lived so long with the virus. Some people experienced a redistribution of body fat, giving them gaunt-looking faces, or swollen bellies, or the appearance of a slight hunchback.

So, quite frankly, I was grateful for my interferon side effects. My KS treatment was apparently keeping me healthy enough that I could justify skipping HIV treatment. Having experienced a disfiguring disease, I was afraid of medications that could affect my physical appearance.

My insurance eventually no longer covered interferon, and so I stopped taking it. For a few years, I coasted. I still refrained from HIV treatment because I “felt healthy enough.” Then in 2011, a familiar purplish spot appeared, just below my left ankle.

My KS was back. Once again, fear took hold. As months went by, I watched as the spot slowly grew. It was only the fear that another spot might soon appear that made me see a doctor. A biopsy confirmed the diagnosis.

Interferon is no longer used for HIV-related KS. These days, the only treatment is to go on HIV medication. Reluctantly, I did, going on one of the first single-tablet regimens. The spot began to shrink, then disappear, and my viral load and T-cell count improved.

The side effects came with almost the first pill. Repetitive dreams nearly as bad as those from interferon. And during the day, a depression was beginning to settle in. I was afraid that this was my new normal.

I struggled for 11 months until I found a justifiable out. Up to that point, my meds had been covered by ADAP. By this time, I had returned as POSITIVELY AWARE’s creative director, and TPAN’s insurance was about to cover my pre-existing condition. However, the paperwork transitioning me from ADAP to private insurance had gotten lost, and I now had no way of paying for my next refill. The thought of jumping through bureaucratic hoops to ensure experiencing side effects only seemed to add insult to injury. I felt justified in telling the pharmacy to keep their drugs, and I walked away from treatment.

I was afraid, however, of being called irresponsible—or a hypocrite. I didn’t want anyone to know what I had done—or rather, what I was no longer doing. Do as I say, not as I don’t. So, when asked, I didn’t lie, I just let people think I was still on treatment. I told myself that my healthcare (or lack of it) was a personal decision.

After all, I still “felt healthy enough.” But fears lingered in the back of my mind, often pressing to move forward. I had once been afraid I wouldn’t live to see 30; having passed 50, I was starting to fear what might lie ahead.

My fears led me back to when I first faced KS. I’d made it this far, I was damned if I was going to die like it was 1985.

That’s when I decided to get back onto treatment.

I don’t like doing things that I’m supposed to do. I wasn’t happy having to go see my new HIV specialist. But she is smart, witty, and calls me out on the stuff I try to get away with—exactly the kind of doctor I need. There are some issues that need to be identified—Dr. Patel is “concerned, but not worried.” Four weeks after starting treatment, my numbers had already significantly improved.

I’ve always believed that those of us who live with HIV should live by example as well as we can—to educate, enlighten and give courage to others. No one wants to admit to being afraid. Fear can make you feel helpless and isolated. But the truth is, you are not alone. If you learn how to use it, fear can be a good thing. It can remind you that there is something more important than fear.

Rick Guasco has been Creative Director of POSITIVELY AWARE since 2010. He occasionally posts on Facebook about his return to HIV treatment.