Ron Stall explains how many gay men survived twin epidemics, both HIV/AIDS and a culture of violence and victimization while growing up.
PHOTO BY MATT SHARP

More than 75 long-term HIV survivors met in Rancho Mirage, California on November 3 for The Reunion Project, a daylong summit on living well with HIV as we get older. The Palm Springs area has become a magnet for long-term survivors who moved to the desert resort city for its warm weather, affordable housing compared to the rest of California, excellent healthcare and HIV services, and a more relaxed lifestyle. This has made it unique in having the largest concentration of older HIV positives anywhere in the country. As such, it is a bellwether for the graying of the HIV epidemic. Currently more than half of all people living with HIV in the U.S. are over 50, and by 2020 research projects it to be 70 percent.

The day began with a panel discussion about long-term survivorship with organizers Matt Sharp and Gregg Cassin from San Francisco, POSITIVELY AWARE Editor-in-Chief Jeff Berry, David Richwine of Bristol-Myers Squibb (BMS), and Jeff Taylor, from Positive Life/Palm Springs. Richwine, who was a nurse when the epidemic began, reminded the group that as an HIV-negative gay man who cared for the dying in his community, the emotional impact was—and continues to be—as devastating for him as it was for everyone who lived through the worst days of the epidemic. Scenes were shown from the documentary Desert Migration, which chronicles the experiences of several HIV-positive men who moved to the desert—some because they thought they were going to die, and others to start life over. Director Daniel Cardone and Eric Jannke, who was one of the men featured in the film, shared their experiences of living through the epidemic, and the day-to-day challenges experienced by survivors. The film is now being shown throughout the country, and clips can be viewed on their Facebook page: facebook.com/DesertMigration.

Throughout the day, Gregg Cassin from the Honoring Our Experience program in San Francisco checked in with the group, inviting participants to share their experiences, and helping them process the emotions that arose [see sidebar].

One of the most touching moments of the day was when a young man and woman, who were two of the approximately 20,000 of those in the U.S. who were born prematurely and infected with HIV via blood transfusions in the early 80s, before the supply was being screened, shared their stories. Being among the only 50 or so of their HIV-positive peers who survived into adulthood, they reminded the group that long-term survivors are of all ages and backgrounds.

Other presentations covered the policy issues facing people living with HIV as we grow older, with Phil Curtis from AIDS Project Los Angeles (APLA), Chris Brown from the LA Gay & Lesbian Center, and Octavio Vallejo from BMS; UCSD neurobehavioral researchers Drs. Ron Ellis and David Moore on the memory loss and other neurocognitive problems often seen in HIV; and psychologist Dr. Jill Gover of the Palm Springs Gay & Lesbian Center who described the AIDS survivor syndrome she sees in many of the older HIV-positive clients she counsels. Local physician Rick Loftus spoke about a new research collaboration between area HIV doctors and the Palm Springs HIV community called GRACIE that will compare aging between HIV survivors and their HIV-negative counterparts, as well as innovative treatments to improve their quality of life (hivstory.org).

Long-term survivor Nick Nicholas spoke about how he has overcome some of his HIV-associated neurocognitive problems by developing an innovative system of memory aids and using various phone apps that have allowed him to complete his master’s degree. And University of Pittsburgh researcher Ron Stall talked about his encouraging research into the “resiliency factors” that allow the majority of HIV survivors to thrive in spite of their challenges.

There was vigorous discussion after each presentation, where attendees shared information on local resources, including the local Let’s Kick ASS (AIDS Survivor Syndrome) chapter that formed last year after a visit by LKA founders Tez Anderson and Matt Sharp on World AIDS Day 2014. Let’s Kick ASS has also partnered with staff at The Center to provide closed therapy groups specifically geared toward long-term survivors and issues such as isolation and depression. One man proudly declared that he considered himself “not a survivor, but a thriver,” an apt description of the theme of the summit.

The Reunion Project-Palm Springs was a collaboration between Test Positive Aware Network in Chicago and the Positive Life HIV Education Series in Palm Springs, and sponsored by an unrestricted educational grant from Bristol-Myers Squibb. The first event was held in Chicago in June 2015. More Reunion Project events are planned in other U.S. cities for 2016. 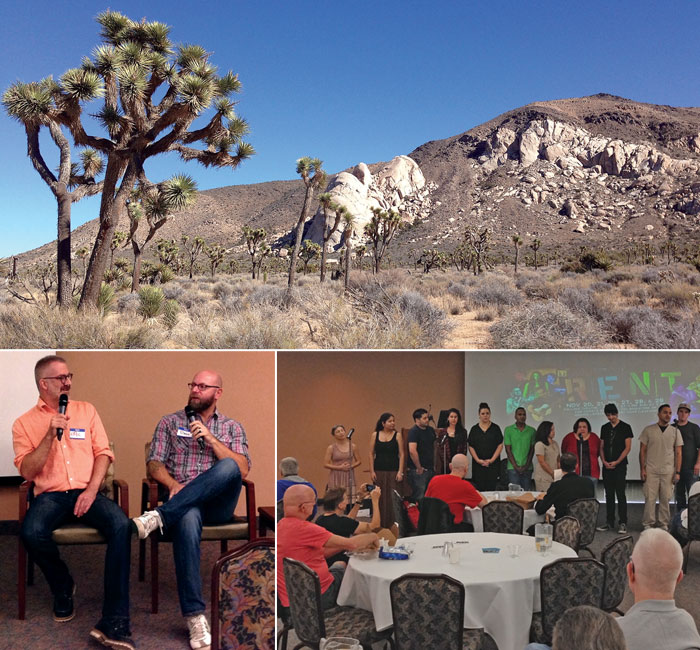 The beginning of the epidemic

EDITOR’S NOTE: Gregg Cassin, a long-time activist from San Francisco and one of The Reunion Project organizers, spoke these powerful words at the beginning of both 2015 summits, and in doing so set the tone for each day’s discussion.

There was a crisis, a horrible time when we were left to fight on our own. The government had left us to fend for ourselves, even our families and religious communities turned their backs on us. We reached out and reached out and finally learned “it was just us”—we had to rely on one another.

We joined forces and weathered a horrible storm, and as we did we realized our power, we saw who we were and who we were BECOMING. This community, which had been discarded, shamed, maligned, hated, outcast, and ignored came together in the most beautiful and powerful way. It is a story that is so heroic, noble and beautiful that it is now the stuff of films, books, plays, and anthems…Not only as history but as a testament to the power of the human spirit. In the middle of the war we were selfless angels when needed, brilliant strategists when needed, and ferocious attack dogs when needed. We do that all—EVERY talent was needed to respond to this war, and we did.

We, the marginalized and forgotten ones who the world said ‘No!’ to—realized we only had one another. Because we only have one another we brought our passion and commitment, our deep loyalty and integrity and this unbelievable resilience and love. It was ALL called up. This community not only took care of its own, but we changed the world. And in this turning to one another we saw the truth of who we were. We really saw one another and ourselves for the first time. And we were in awe of our power and humbled by our noble, profoundly resilient hearts. (Look around this room—and see these resilient hearts… See who we are.)

Some of us now feel like (and can look like) the war-torn heroes that we are. We went through hell and we survived!

And now we’re realizing that the greatness of the time was in COMING TOGETHER. The coming together for one another, and for ourselves. But the magic stuff that held us together at the time was our deep sense of community. We cannot think back to those times without the memory of a profound sense of connectedness and purpose.