Held the day before the start of its AIDS 2022 conference, the International AIDS Society (IAS) hosted a hybrid workshop focusing on HIV cure research advances globally and research strategies under investigation while translating the latest science and incorporating diverse perspectives.

Titled Pathways to an HIV Cure: Research and Advocacy Priorities, the meeting was organized in partnership with the Canadian HIV Cure Enterprise (CanCURE) and the Canadian AIDS Infectious Diseases Network. The 2022 IAS HIV cure workshop aimed for a full integration of community advocates, clinicians, biomedical researchers, and laboratory scientists.

City of Hope patient: The City of Hope [cityofhope.org/hiv-patient-achieves-remission-following-stem-cell-transplant-city-of-hope], based in southern California, announced that a man diagnosed with HIV in 1988 had achieved potential cure following a stem cell transplant from a donor homozygous for the delta32 gene deletion. The stem cell transplant was administered in 2018 to treat acute myeloid leukemia (AML). The City of Hope patient stopped HIV treatment in March 2021 and has been off treatment for over 17 months. Following Timothy Ray Brown (the Berlin patient), Adam Castillejo (the London patient), the Düsseldorf patient, and the New York patient, this represents the fifth case of potential HIV cure following an intervention—although it was erroneously reported as the fourth case in the media. (See 'Hope blooms'.)

Exceptional elite control of HIV: A woman in Barcelona was found to have achieved a state of “exceptional elite control” [aidsmap.com/news/aug-2022/barcelona-woman-controls-hiv-over-15-years-without-treatment] while she has remained off HIV treatment for over 15 years with undetectable HIV. The woman was treated early with antiretrovirals for nine months plus an immunosuppressive drug and does not have any genetic factors that would predispose her to achieving exceptional elite control. Her case adds to the scientific understanding of how people with HIV may be able to achieve a state of sustained HIV control.

Research priorities for an HIV cure: Dr. Sharon Lewin, professor of medicine at the University of Melbourne and now IAS president, presented the IAS Global Scientific Strategy towards an HIV cure, published in Nature Medicine [pubmed.ncbi.nlm.nih.gov/34848888] in late 2021. The strategy summarizes key scientific advances in the last five years, remaining knowledge gaps, and research priority areas for the next five years. The strategy focused on critical recommendations, including understanding and measuring HIV reservoirs (the main barrier to HIV cure), improving mechanisms of HIV control, developing effective interventions that target the provirus or the immune system, investing in cell and gene therapy, advancing pediatric remission and cure, and understanding the socio-behavioral, ethical, and community aspects of HIV cure research. 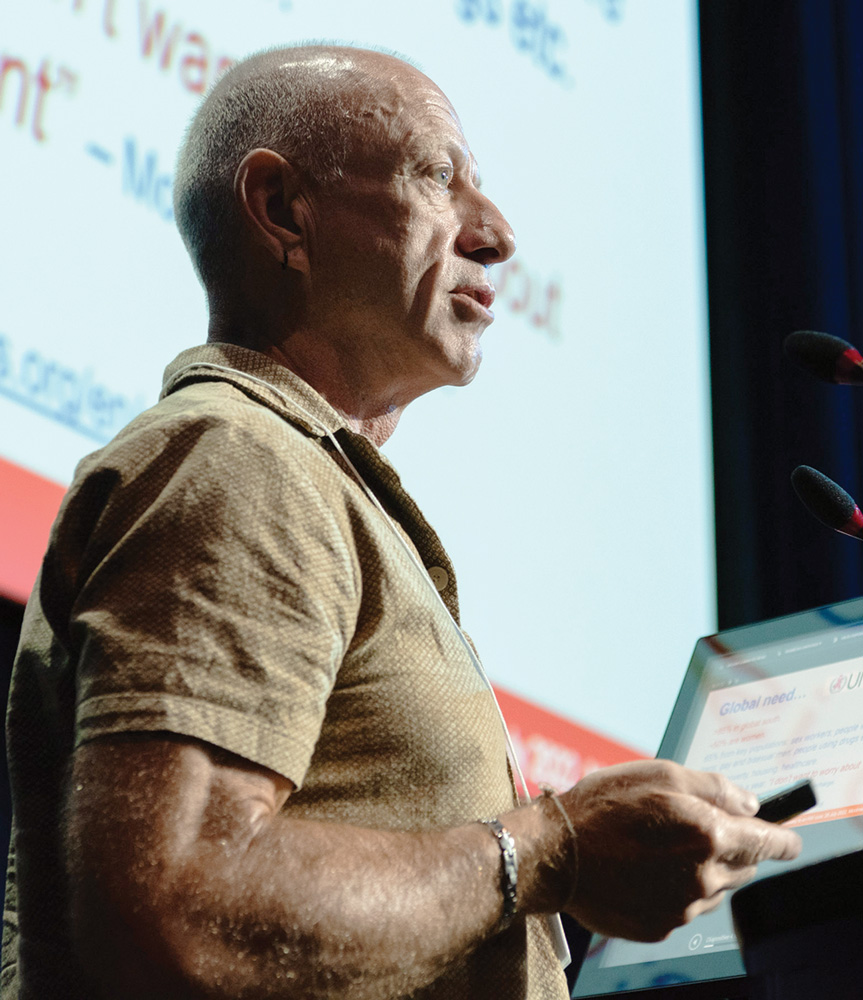 Tom Perrault, former HIV cure trial participant at the University of California San Francisco (UCSF), was interviewed by Michael Louella, Outreach Coordinator at the University of Washington (UW) Positive Research. Tom recounted his emotions throughout his entire HIV cure journey before, during, and after his HIV treatment interruption, and explained how he needed to mentally prepare to go back on antiretrovirals after the trial. Tom was grateful to researchers for having given him the opportunity to participate and to advance the search towards an HIV cure.

The cure workshop concluded with a panel describing efforts to expand HIV cure research efforts in Africa—including Dr. Cissy Kityo from the Ugandan Joint Clinical Research Center (JCRC) and Moses Supercharger, both of whom joined virtually after being denied a visa to travel to Canada. Jen Adair, who leads the Global Gene Therapy Initiative (GGTI) [pubmed.ncbi.nlm.nih.gov/34493840], described reasons why investing in cell and gene therapy for HIV cure research in low- and middle-income countries is a sound scientific investment.

For more information about the 2022 International AIDS Society (IAS) Towards an HIV Cure Workshop, go to: iasociety.org/events/pathways-hiv-cure-research-and-advocacy-priorities.