VEGA  AND TAYLOR (TOGETHER): Renata and Ray, starting your day!

TAYLOR: Speaking of regrets, there is one passage in your book I’m curious about. It’s about your zealous, some say overly zealous, prosecution of crimes related to HIV. Your prosecution of HIV-related crimes was unyielding to say the least. In 1993, you argued to give Darnell Jackson, age 23, the maximum sentence of 15 years, for allegedly biting and spitting at a police officer. There was no transmission of HIV, and no marks on the officer, but Mr. Jackson was convicted of attempted murder, aggravated assault, and making terroristic threats. For someone who was HIV positive at that time, 15 years was a death sentence.

TAYLOR: He was released after six years for exemplary behavior. But he was labeled a sex offender, a status that makes it enormously difficult to find a job, housing, he’s identified to his neighbors, he can’t go near schools, he can’t even be in a room alone with his nieces and nephews without another adult present. His life was ruined.

RATLIFF: Mr. Jackson was lawfully prosecuted according to the laws of this state. You have to remember the context. At the time those laws were written, emotions ran very high, very high. There were no drugs. No medications. If you were infected, it was a death sentence. I explain all this in the book. Yes, the penalties were harsh, but I was enforcing the law as written.

TAYLOR: Which brings me to the issue of HIV-specific crimes. If you could put people away for decades with laws that were already on the books, why did you make it your mission to pass a whole series of new laws specific to HIV? It was previously unheard of to pass laws specific to a particular medical condition.

RATLIFF: Those laws were written in a time of great panic. And it wasn’t just Jersey. A lot of states passed similar laws. The public demanded them.

TAYLOR: But when the panic subsided, when medications became available, the laws were recognized as onerous, and bills were introduced to lessen their severity. You voted against them.

RATLIFF: That’s misleading. I wasn’t a state senator every time those bills were introduced.

TAYLOR: As a state senator, you voted against two decriminalization bills. As a U.S. Senator, you had the power and the voice to influence votes on subsequent bills. Yet you said nothing.

RATLIFF: You can’t expect me to remember every vote on every bill.

TAYLOR: Sir, you agree the laws were written in a time of hysteria, but you’ve done nothing to correct them. HIV specific laws are still on the books in 30 states. New Jersey’s carry some of the stiffest penalties in the country.

Other states have modernized their laws to meet current science. It’s a shameful, tragic irony that the first state in the country to ratify the Bill of Rights tramples so heavily on the rights of people with HIV. I have a personal stake in this fight and I’m asking you to help right these wrongs.

RATLIFF: I don’t have the power to rewrite every law I disagree with, Ray. I’m not even in office.

TAYLOR: Your book is on the best seller list. You’re on a speaking tour. You could say something. Your book contains only a tepid expression of regret over a case where a boy was sentenced to 15 years in prison in a case with no transmission of HIV.

RATLIFF: He was 23! He wasn’t a boy! And he was threatening police officers!

TAYLOR: The boy had been severely beaten. And biting and spitting does not transmit HIV.

RATLIFF: The officers didn’t know that!

TAYLOR: They should have! And you did know! You knew it very well.

VEGA: Sir, these laws are horrendous. The laws in New Jersey don’t even require transmission of the virus. You don’t even have to prove intent to cause harm. Without transmission, or intent to harm, how is there a crime? No one is harmed, but they can still be found guilty? How is that fair?

RATLIFF: You’re leaving out a key element, Renata. These people didn’t disclose their status. Why can’t they just disclose?

VEGA: In a perfect world, that would be an easy call. In a perfect world, people would be honest and good, everyone would have access to health care, nobody’s job would be at risk, and having HIV wouldn’t carry stigma. That’s not the world we live in. Especially women. Senator, you have this idea in your head that it’s so easy to disclose. But for every reason to disclose, there are a hundred reasons not to.

And one major reason is these laws. They’re counter-productive. They’re a reason to not get tested, because if you don’t know your status, you don’t have anything to disclose.

RATLIFF: None of this has been proven to my satisfaction.

VEGA: Just think about it! Why would anyone give a person they’re dating so much power? They can tell your neighbors, your family, your job, your church, social media, any random stranger. They could ruin your life, and put you in jail for years. You have no idea what it’s like for people like me. For people in my community. In my own family. You don’t know, and you’re not even listening.

You don’t know what criminalization does to families. In your world, people get in trouble, daddy makes a phone call, some high-priced lawyer makes it all go away. In my world, people make mistakes, but for us, scraping together three thousand or five thousand dollars for a lawyer is impossible, even if the whole family chips in. And these days, five thousand dollars buys you a crappy lawyer. So for years and years, there’s an empty seat at the dinner table. At every family event. Do you have any idea what that’s like?

VEGA: Okay, but in my situation, Senator, family members start blaming each other, and everyone chooses sides, and we get angry, and feel guilty, and get upset that nobody came up with the money, and every family holiday is full of tension and anger and sadness. And even after they get out, these people feel shame and regret, and sometimes they move away, or become estranged, or spiral down and our families are left with loss. Terrible loss. We don’t just lose a person, sir. We lose part of the fabric that holds our families together.

You ask, “Why don’t they just tell them their status?” Because telling one person could mean the whole world finding out. 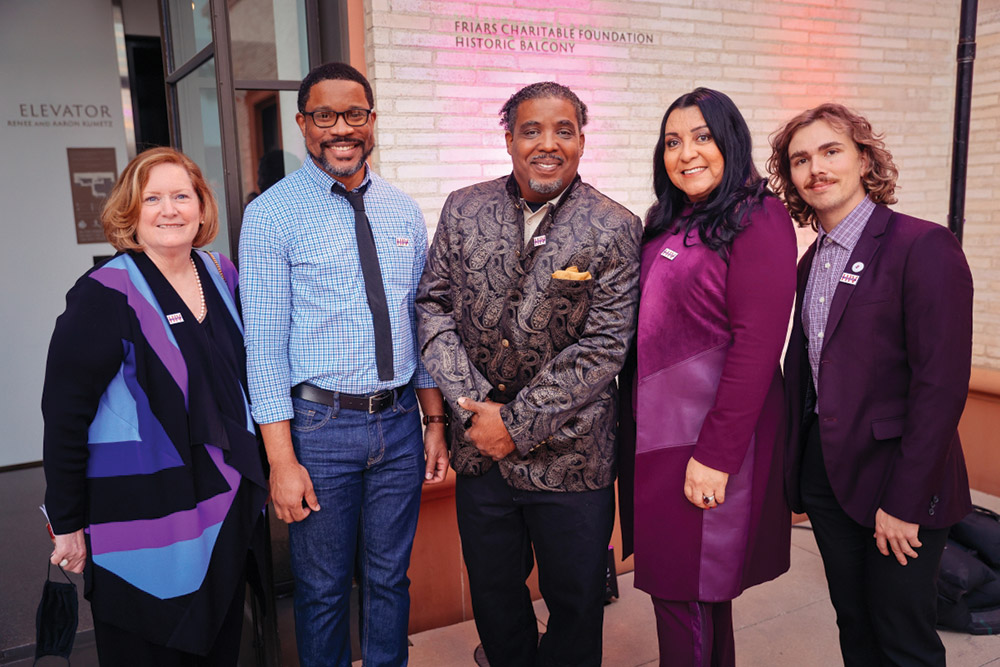 From left: Catherine Brown, executive director of the Elizabeth Taylor AIDS Foundation (ETAF); Robert Suttle, chair of ETAF’s Council of Justice Leaders; activist Andre Leaphart, Diana Oliva, of Gilead Sciences; and Jake Arman, ETAF program manager at a December 2021 performance of “Unjust.” The play was commissioned for ETAF’s HIV Is Not A Crime initiative. Go to hivisnotacrime-etaf.org. Suttle appears in a testimonial video as part of the True (Not) Crime series directed by Zachary Quinto at bit.ly/Suttle-HINAC-video.