About Garth: ‘He is somebody that people have a lot of respect for. He’s really someone who people trust a lot and definitely trust to be reliable, to be consistent,’ says Yolo Akili Robinson, executive director of BEAM (Black Emotional and Mental Health Collective)

Gerald Garth ushers in the next generation of leadership
By Stephen HicksMay 7, 2022

Gerald Garth’s calendar is bursting with meeting invitations ranging from monthly check-ins to festive outings. He is a man-about-town wearing several hats, lending his advocacy along his travels. This afternoon, he’s taking it easy—a Zoom call here and there, a coworker dropping off items, and a hard stop at 2 p.m. He’s wrapping up his to-do list before attending a string of holiday parties and year-end celebrations.

Garth had a good 2021, personally and professionally. He describes prioritizing joy, setting boundaries, and tweaking his work-life balance. Sounds like sage advice, considering he’s stepping into multiple new roles in 2022. For one, he will be Director of Diversity, Equity, and Inclusion with the Los Angeles LGBT Center. He was elected to two positions: vice president of community initiatives and programs with LA Pride and the head of media and communications for Global Black Pride.

“I start [at The Center] at the top of the year, building strategies,” Garth said. “We are taking a robust view, looking at the hiring practices, programs, protocols, staffing structures, opportunities, next steps, and so forth.”

“The L.A. LGBT Center serves as a beacon around the world. A lot of organizations look to the Center or are supported through the Center, get resources through the Center. I recognized that this role and opportunity would be bigger than just the L.A. footprint,” he said. “Then with my unapologetic approach to uplifting Blackness, I really see it as a wide-reaching opportunity to do one of a couple things. To one, address, dismantle, reimagine, deconstruct systems. Also uplift, empower, amplify Black folks and other underrepresented groups.”

Garth’s new job at the Center calls for greater visibility, and up until recently, he was perfectly fine working behind the scenes. This was his norm. Dating back to the theater days in his native Baton Rouge, Garth set out to help wherever he could. UpStage Theatre Company, seated in his hometown, served as a creative hub for a 20-something year-old Garth. There, under Dr. Ava Brewster-Turner’s direction, he hoped to hone his storytelling craft as a budding playwright and set designer—somewhere in the background. He assisted with the wardrobe or swept the floors. One day, while striking the set (theater-speak for breaking down pieces of the stage), Dr. Brewster-Turner commented, “You look good on stage.” He said thank you and continued the task at hand. She added, “Your voice is really good onstage also.” He kept picking up cups. She then suggested he audition for an upcoming play, UpStage’s rendition of August Wilson’s Radio Golf. Reluctantly, Garth auditioned but bombed badly and returned to his duties. Brewster-Turner offered him a second go. This time, she gave him notes and extra encouragement. He retreated to his car where he devoured the monologue, returned inside, and delivered it, scoring the lead.

“That was foreshadowing,” he said. “Those times in gestation are in preparation for what’s next. I do feel like all of those steps along the way [where it] felt like I was in hiding were actually just preparation. I’m prepared. I am actually excited. I feel like I have all of the tools. Even from my time in the media, my time as an actor, my time as an advocate. All these things have baked together to this newest chapter.”

Garth trekked out west nine years ago while the bulk of his family still resides in Louisiana. He learned the city as he navigated his previous roles at the Black AIDS Institute (BAI), the City of Los Angeles, and most recently The AMAAD Institute (Arming Minorities Against Addiction and Disease).

He said he constantly encountered a lack of adequate resources in South L.A.—Watts, Compton, and Inglewood.

“For so long, disjointed systems have told our communities that they had to go someplace else to see support, to see resources, to see beauty, so much of my work with AMAAD and BAI has been to help communities to celebrate and strengthen our own spaces throughout Los Angeles,” he said.

“Gerald is a leader for our time,” Wilson said. “He understands that the issues we face, the challenges confronting us, and the nature of our existence is about intersectionality, so it is always an ampersand. It is always and; it is not Black or gay. It is Black and gay and cisgender and trans and non-binary. It’s reflected in his body of work.”

Upon arrival, it didn’t take long before Garth connected with the Center and not in the most ideal circumstances.

“My first interaction with the Center was not pleasant,” he said. “Even though I wasn’t a consumer of services, so many people who I was connected with, even in previous roles, had poor experiences with the Center. As a voice of the community, I was vocal about that, with the leadership team, with their service provision team. I laugh because I would not have imagined eight years ago, nine years ago, that I would even be considering going to them even for services and activities, let alone as a staff person.”

Garth says the Center has implemented more approaches lodged from community members—namely, the Black LGBT people in L.A. A shift was taking hold, he said.

Sharon-Brown Franklin is the Director of Human Resources at the Center, and has known Garth for several years.

“One of the things that has impressed me is his ability to bring lived experiences and intersectionality together and bridging the gap while meeting people where they are. The Center is committed to creating a work environment in which employees who are Black and people of color can flourish,” she said. “He has the ability to help us reach those goals.”

Though staff have participated in internal Diversity, Equity, and Inclusion (DEI) trainings, Garth’s arrival ushers in an opportunity for a rollout of new initiatives, Franklin said. Emerging from behind the scenes, Garth has several goals in mind. Shifting culture and raising morale rank high on his list, along with placing increased value in the lived experience of staff members. He hopes to sway things, but he knows patience is key considering the size of the Center’s workforce.

“I’ve been reminding folks consistently that while [they] are excited about me assuming this role, I’m not a genie. It’s not overnight. It’s not my role alone,” he added.

“He is somebody that people have a lot of respect for. He’s really someone who people trust a lot and definitely trust to be reliable, to be consistent. And I think that’s really kind of representative [of] his work in L.A.,” they said.

Garth remains motivated and steadfast while filling in different roles, whether at the Center, LA Pride, or Global Black Pride. He was also named a faculty mentor for Creating Responsible Intelligent Black Brothers (C.R.I.B.B.) at NAESM, a community-based organization in Atlanta devoted to Black gay men’s health and wellness. The yearlong fellowship develops leadership skills for Black gay and bisexual men who are active in HIV/AIDS services.

“People living with or at highest risk of acquiring HIV, Black people, and LGBTQ+ people, are disproportionately impacted across several lines of social determinants of health. And so many of the needs and responses for these communities are where these experiences come together,” Garth said. “For me, this further amplifies the need and unique role of those who represent and advocate at those intersections. I am very grateful to be trusted to bring my skills, passion, and voice to the work for those who are often underrepresented or misrepresented, if represented at all. I often say that ‘none of us have to do everything if all of us do something’—the very definition of a village. It motivates me to know that what I bring to the work—to our village—is valued and valuable.” 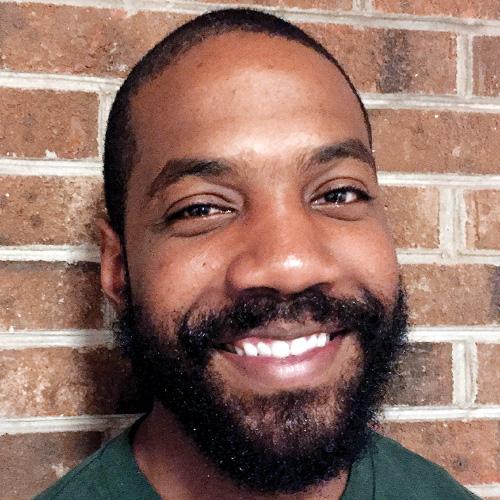 Stephen Hicks (he, him) is a writer and has been a public health advocate for more than 10 years, focusing on sexual health and harm reduction. He is the Narrative Justice Fellow at CNP (formerly The Counter Narrative Project).