We know that pre-exposure prophylaxis (PrEP) and viral suppression have achieved the most success in reducing new diagnoses of HIV and advancing the end of the epidemic. While PrEP prevents an HIV negative person from acquiring the virus, being virally suppressed means that someone living with HIV cannot pass along the virus. Together, the two trap HIV where it is and block its spread.

Drops in new HIV diagnoses among Black and Latino MSM (men who have sex with men) are lagging behind those for white MSM. How effective are the current prevention efforts in reaching Black MSM and Latino MSM? Why are current efforts failing? And what changes will increase success?

A general distrust of the healthcare system can be compounded by language and cultural differences that lead to miscommunication and perceived disrespect between providers and patients. Language differences severely limit the ability to find and secure needed services and access to public benefits to make care affordable. HIV stigma and homophobia greatly limit the providers that MSM will use.

Multiple studies have found that a provider’s personal biases could potentially cause them to refuse to prescribe PrEP. One bias is the heterosexism of a straight doctor who has a negative moral view of homosexuality and thinks PrEP will promote it. A bias imposes the prescriber’s moral judgments onto patient care, denying PrEP to an MSM with a history of condomless sex. Some providers have a negative bias against “other” cultures and think prescribing PrEP is undeserved. While researchers found no significant incidence of such bias, they strongly urged that PrEP training for medical students and practicing doctors include firm warnings against allowing such bias to influence care.

In discussions to inform this article, Jesus Felizzola, MD, MHSA, MA, Research Professor in the Department of Psychology at The George Washington University, brings his 25 years of experience as a physician and researcher that have focused on HIV in Latinx communities across the U.S. Dr. Felizzola explained the various barriers between Latinx people and health services, particularly PrEP utilization, retention in care, and medication adherence. According to the doctor, language, immigration, culture, and religion give rise to HIV stigma and homophobia, and fear that getting care could lead to discovery and deportation of undocumented loved ones. Some Latinx people avoid providers who fail to understand and accommodate their unique needs and expectations. Additionally, Latino MSM who fear stigma avoid care sites that their community views as “gay,” “for LGBT,” or “for HIV.”

Black MSM share the distrust of the healthcare system that permeates the African American community as a result of the Tuskegee Syphilis Study (1932–1972) and other abuses inflicted on Black people under the guise of medical care. Black apprehension about healthcare, especially when it is associated with the government, has been a challenge during the COVID-19 pandemic. Treatments seen as new and unproven are often viewed with great skepticism and avoided. Mistrust of individual providers blocks the willingness of Black MSM to discuss and decide to use PrEP. Providers who lack training and cross-cultural skills cannot accurately assess a Black or Latino MSM’s sexual history or always make the right decision about prescribing PrEP.

A small 2019 study revealed that many Black MSM have derogatory views of people who use PrEP and what that means about an individual’s sexual promiscuity and fidelity in a relationship. Actual comments made to Black MSM using PrEP included, “I feel like you being on PrEP means you like to sleep around” and “Are you a Truvada whore?” These may seem petty and minor from a distance, but respondents made it clear that the consequences mattered to them.

Adherence to HIV medication leads to viral suppression, which prevents transmission from a person living with HIV (PLWH) to their sexual partners. Retention in care includes doctor visits that can educate and persuade PLWH about HIV facts and new advances, information that can influence the person living with HIV and their partner(s), and become a source of awareness and accurate information in the community. That is why the HIV community sees that treatment is indeed prevention.

Researchers have found that an HIV diagnosis can cause trauma in Black MSM, and that a patient-centered approach to help patients deal with the trauma is critical to entering and remaining in care. Such trauma is likely a factor among Latino MSM as well.

Overcoming barriers for a more effective system of care

As we plan for a more successful future, we need to remember the five “As”— Availability, Awareness, Accessibility, Affordability, and Appropriateness—that must exist to maximize client utilization. Availability alone is of limited value if other conditions are not met. Awareness depends on culturally appropriate outreach to make individuals aware of services and encourage using them. Accessibility requires service proximity to clients and hours including evenings and weekends that fit client schedules. Self-tests and telehealth increase accessibility. Affordability is ensured when medical homes and other primary care providers have public benefits staff present to enroll clients. Testing site staff that refer those who test positive must stress that the ability to pay is not a barrier to care. Appropriateness requires culturally competent staff in every provider position to meet the needs and expectations of individuals from diverse cultures. Personalized assessment, flexibility in meeting needs, and respectful treatment are critical. Cultural competence is not just about language. It is also about accommodating differing values, mutual respect, and demonstrated understanding. 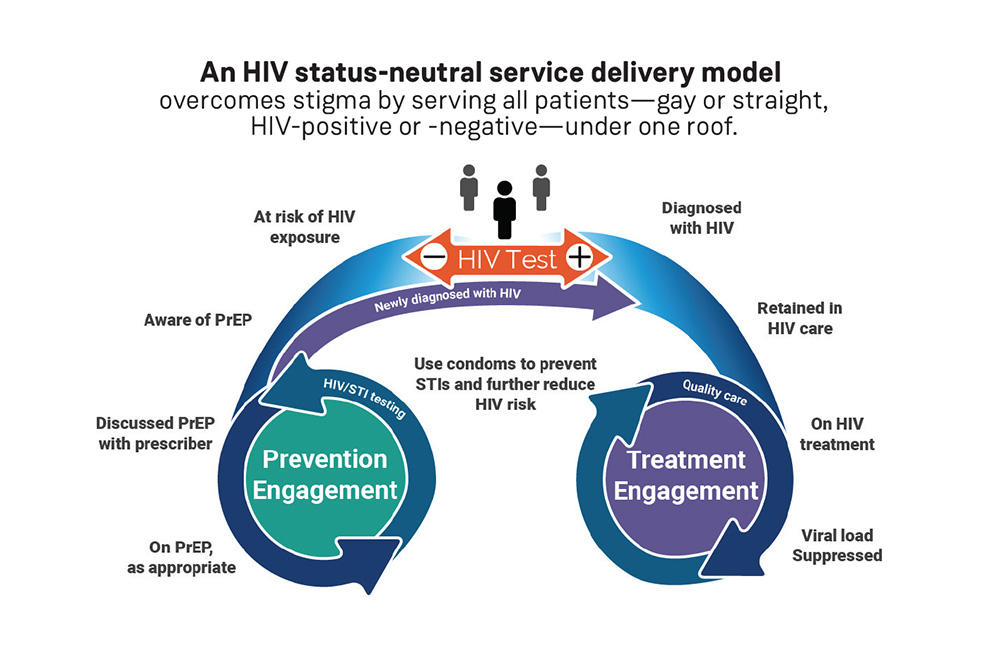 Status-neutral clinics (see figure here) overcome stigma by serving all patients under one roof (gay or straight, HIV-positive or HIV-negative, those with high blood pressure or diabetes) and the only place the patient’s needs are known is in the privacy of the doctor’s examination; HIV testing and PrEP prescriptions are made a part of regular visits to STD clinics and regular primary care doctors (as a routine part of preventative care); and self-tests are used along with telehealth doctor consultations.

Data to Care (D2C) improves outreach and connection to care. D2C includes using HIV surveillance data routinely collected by state and local health departments and other data sources to identify persons who are not in care (NIC) and then link or re-engage them in care, and identify persons who are in care but not virally suppressed and work with these clients and their providers to achieve viral suppression.

Care Navigators and Peer Support raise rates of retention in care by making the system accessible, and responding to issues the newly-diagnosed and newly-in-care may face, both medical and non-medical.

“Inclusion” of PLWH and staff from BIPOC (Black, indigenous, and other people of color) communities requires participation and full empowerment in the entire process. PLWH withdraw from participation when providers use them to check the boxes on grant applications but do not apply their input to crucial decisions. Black and Latino MSM and BIPOC who live with HIV are grossly underrepresented among provider staff and management. Those who are hired often report frustration with working conditions, disrespectful treatment, inadequate consideration for their input, and a lack of inclusion by other staff. Such shortcomings often result from a lack of effort to change the status quo.

Improving outcomes for Black and Latino MSM is just a small part of the challenge facing HIV prevention and care and a fraction of the challenge facing the U.S. healthcare system as a whole. In an increasingly diverse nation, genuine inclusion for all is an absolute necessity. Just as Black and Latino MSM need to be able to trust the HIV care system, to be understood and respected, to receive appropriate services, to see people who look and think the way they do shaping and delivering services they need, all PLWH and everyone using the healthcare system deserves the same.

Establishing the system that patients deserve will require change from the ground up, pairing the best of the existing system with new, more effective components. Healthcare personnel will need to acquire the skills and attitudes required to ensure the new strategies operate optimally. Creating a successful path forward will fare best if all participants are heard and respected, all ideas are heard without judgment, and participants move to a conclusion reached by genuine consensus that yields the best results, better than any other process by far.

So, this challenge is an opportunity to be better than ever before. It should be embraced, not feared. 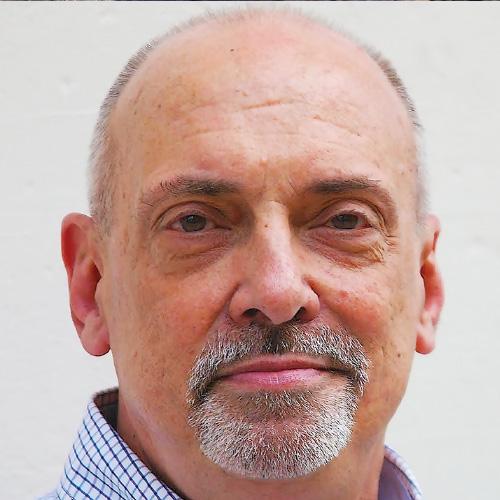 Mark Fischer (he, him) is a retired educator and business executive. He has lived with HIV for over 35 years. He is the past co-chair of the Metropolitan Washington, D.C. Ryan White Planning Council and now serves as a technical assistance consultant to the council.