An idea whose time has come

What if you were told that there was a public health intervention that did the following for people who use drugs (PWUD):

Would you be interested in such an intervention? The answer is likely ‘yes, but what could possibly do all of that?’ The answer: Safer drug consumption spaces.

In the United States, this sounds like a radical idea, but SCS are well established throughout the world. In an effort to address problems associated with injection drug use, the first legal supervised consumptions space was established in Berne, Switzerland in 1986. Soon thereafter, others were opened in cities throughout Western Europe, with one in Sydney, Australia and two operating in Vancouver, Canada. Additionally, Canada is embarking on an expansion of SCS, with several planned to open across the country in the coming months and years.

Overall, there are approximately 100 SCS operating around the world, located in over 66 cities in 10 countries.

There are currently no legal SCS operating in the U.S.

“protected places used for the consumption of pre-obtained drugs in a non-judgmental environment and under the supervision of trained staff. They constitute a highly specialized drugs service within a wider network of services for people who use drugs, embedded in comprehensive local strategies to reach and fulfill a diverse range of individual and community needs that arise from drug use.

“The aim of DCRs is to reach out to, and address the problems of, specific high-risk populations of people who use drugs, especially injectors and those who consume in public. These groups have important health care needs that are often not met by other services and pose problems for local communities that have not been solved through other responses by drug services, social services or law enforcement.”

The European Monitoring Centre for Drugs and Drug Addiction adds that these sites “also seek to contribute to a reduction in drug use in public places and the presence of discarded needles and other related public order problems linked with open drug scenes. Typically, drug consumption rooms provide drug users with sterile injecting equipment, counseling services before, during and after drug consumption, emergency care in the event of an overdose and primary medical care and/or medical care and referral to appropriate social healthcare and addiction treatment services.”

There are many types of SCS. The most common one is the “integrated” SCS, where safe consumption spaces are made available along with a wide array of other services including, but not limited to, HIV and HCV testing, medical care, mental health services, and linkage to drug treatment.

The “specialized” model is one where only injecting or smoking of drugs happens. Staff is available to monitor for drug overdose and provide referrals to other programs and services.

In addition to these brick-and-mortar spaces, there are two types of mobile or temporary “pop-up” spaces for safer drug consumption, which locate themselves in places where PWUD live and follow them as homeless camps move or drug scenes shift. 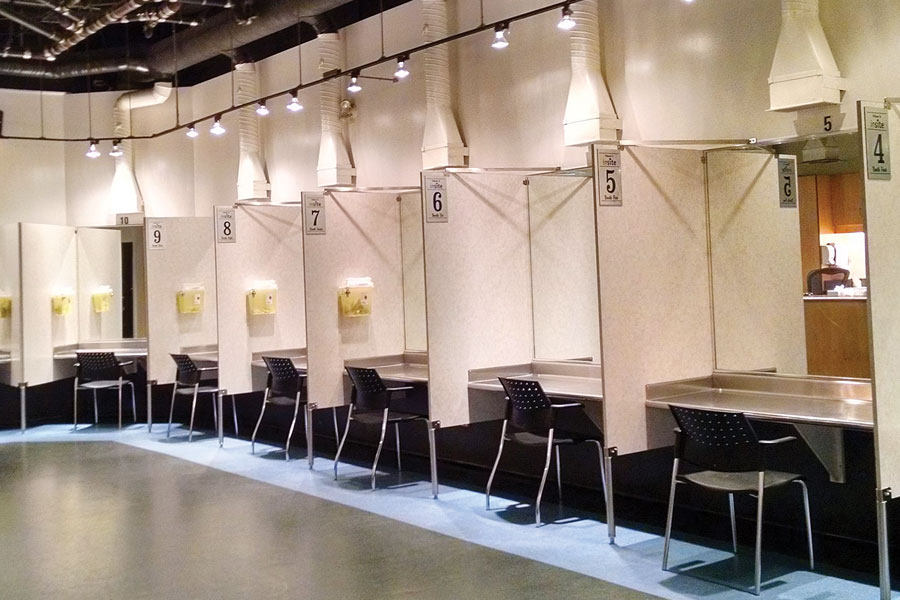 Critics of SCS contend that they enable and encourage drug use. They argue that PWUD won’t use them, and that SCS will have little impact on preventing HIV, HCV, or overdoses. They worry that bringing them into neighborhoods will lead to public disorder problems, including but not limited to, loitering and crime, while doing little to address public drug use. They argue that tax dollars are better spent on law enforcement and drug treatment. In short, they argue that SCS won’t work.

The facts, however, do not support such conclusions. These sites are well evaluated and are evidence-based interventions to improve the health of PWUD and have positive benefits for the communities where they exist. The benefits include improved access to clean syringes and improved disposal of used syringes; reduction in overdose morbidity and mortality; reductions in HIV and HCV infections; reductions in soft tissue infections and other medical complications from injecting; increased linkage to substance use treatment programs; and fewer public order issues (public nuisance, petty crime, and public drug use, etc.).

This is not to suggest that SCS will solve every problem associated with substance use, but they will minimize them. Additionally, SCS alone cannot address the problems associated with drug use, including poverty, racism, homelessness, or past trauma. SCS are most effective when they are a part of an integrated system of services to meet the complex needs of many PWUD.

In the U.S., models have shown that SCS have the potential for significant cost-savings. Alex Kral and colleagues published a paper that the opening of a single, 13-seat SCS would save $3.5 million per year while only costing $2 million. These savings would be the result of preventing approximately 3 cases of HIV, 19 cases of HCV, and preventing 415 days of hospital stays as a result of abscesses and other injection-related medical problems. Additionally, it would lead to 110 people entering opioid substitution therapy such as methadone, buprenorphine, etc.

A similar study in Baltimore demonstrated even more savings: $7.8 million in savings versus $1.8 million in costs. It showed that an SCS in Baltimore would result in preventing over 3 HIV infections and 21 HCV infections, and prevent 374 days in a hospital. This study also demonstrated reductions in ambulance calls, preventing 108 overdose-related calls as well as preventing 78 hospitalizations. Finally, it would link 121 PWUD into drug treatment.

Learn more about the Benefits of safe consumption spaces

The work of countless advocates and researchers has resulted in a number of positive outcomes. Across the U.S., cities like San Francisco, Baltimore, Seattle, Denver, and New York City have, at minimum, explored the role of SCS with task forces, community education events, and outreach to local politicians.

In February 2016, Ithaca, New York mayor Svante Myrick announced “The Ithaca Plan: A Public Health and Safety Approach to Drugs and Drug Policy,” which included the opening of SCS as an important component of their response to the local opioid crisis.

Similarly, PWUD and other advocates from Seattle and King County formed the “Yes to SCS” coalition, a diverse group of local concerned citizens to push the SCS agenda in their city and county. From there, a task force was formed and their “Heroin and Prescription Opiate Addiction Task Force: Final Report and Recommendations” called for the opening of at least two SCS (called “Community Health Engagement Locations” or “CHELS”) in their community.

San Francisco, under the leadership of London Breed of the Board of Supervisors and Laura Thomas of the Drug Policy Alliance, has formed a Safe Injection Facility Task Force to explore the utility of SCS and make recommendations accordingly.

States like California and Maryland have introduced bills to make SCS legal to operate. California has seen particular success with AB 186, a bill sponsored by Susan Talamantes Eggman (D-Stockton) that would allow for pilot SCS programs to operate in up to eight local jurisdictions. This bill marks the first time that SCS legislation was passed. To date, it has passed through the State Assembly, as well as several health and public safety committees. It is awaiting a vote in the state Senate, then back to the Assembly to vote on amendments and finally to be signed by the Governor. Once legal, cities and towns can legally and safely operate SCS with legal protections for both program staff and participants.

The Safe Consumption Space movement in the U.S.

Among harm reductionists and people who use drugs, there has been a desire to open SCS for many years. The dominant narrative regarding substance use in the U.S. war on drugs is one where people who use illicit drugs are viewed as morally deficient individuals engaging in criminal activity, and that the only way to deal with “these people” is through abstinence-only drug treatment and/or incarceration. In this mind-set, there is little room for harm reduction and alternative forms of dealing with drug use, including SCS.

To help reshape the narrative on people who use drugs, and implement effective solutions to problems associated with drug use, a number of organizations, activists, and scholars are working on a variety of issues and projects, including SCS. Drug-user unions like VOCAL-New York and their counterparts in Washington, the San Francisco Drug Users Union, and Urban Survivors Union, have placed a high priority on the opening of SCS in their communities, and engage in community education and advocacy to help make them happen.

Policy organizations such as the Drug Policy Alliance, Harm Reduction Coalition, and Project Inform work with communities, local and state legislators, and other policy groups to include SCS in advocacy agendas geared to overdose prevention, HIV and HCV prevention, and access to drug treatment.

Finally, researchers such as Alex Kral of RTI International, Peter Davidson of University of California, San Diego, and Susan Sherman of Johns Hopkins are studying the cost effectiveness of SCS, as well as modeling their impact on preventing overdose and infectious disease.

Safe consumption spaces are a proven, evidence-based intervention that have been shown to reduce overdose deaths, HIV and hepatitis C infections, and other medical problems, while at the same time improving the public order and quality of life of all people—both drug users and non-drug-using neighborhood residents. They are well established throughout the world, and they continue to expand to new countries as well. There is significant momentum to open SCS in the United States. There is a long way to go, but opening SCS in this country would be a strong response to people negatively affected by the war on drugs, saving lives and improving community life for all.