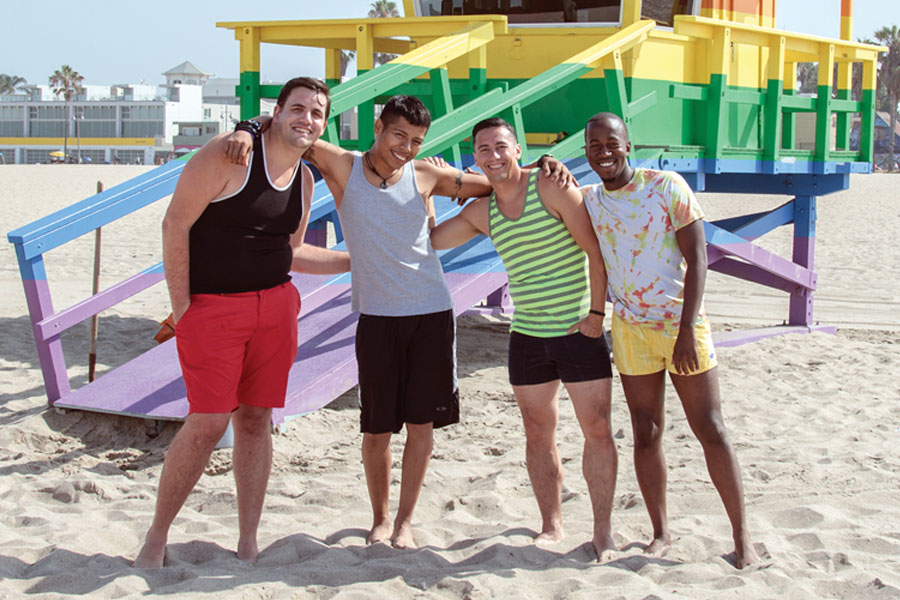 Discovering that you’re HIV-positive can be a turning point in anyone’s life. The four men photographed by Los Angeles photographer Louis Carr for the cover of this issue recall receiving their HIV diagnosis and how it changed their outlook on life.

Ceasar Corona, 40, learned he was HIV-positive in March 2008, at the depth of his crystal meth addiction.

“Testing positive gave me the justification to keep using drugs and alcohol,” Cornona says. “I continued to use recklessly and engaged in risky behaviors that led to my getting arrested multiple times and getting sentenced to a year in county jail in 2010. It was in jail where I learned that my HIV had worsened, and that I also had syphilis and was hepatitis C reactive. The medical team along with a transitional case manager helped me get connected to care.

“The multiple diagnoses and jail were a big wake up call. It was in jail that I decided that I cannot do this alone. I listened to the advice I was given, and educated myself. Upon release, I sought help and was able to get into an inpatient facility that helped me understand my addiction. It helped me rediscover my passion for life and healthy living,” says Corona, who is now a case manager at an HIV treatment center. “Today, I have seven years living clean and sober, have an active lifestyle in fitness and health, and provide case management to others who are currently dealing with addiction and/or HIV.”

The day after a sex partner told Edd Cockrell that he’d tested HIV-positive, the 27-year-old went to the Saint Louis (Missouri) LGBT Center, where he volunteered, and took a rapid HIV test.

“It was the longest 20 minutes of my life,” says Cockrell.

“Growing up in the Midwest I didn’t know much about HIV,” he admits. “My first reaction was that I needed to prepare to die. But I quickly found out this was not at all true. Several friends came out to me as HIV-positive, and they were long-term survivors.”

Cockrell learned he was HIV-positive in September 2011, and went on treatment in December. By March the following year, he became undetectable and has remained so ever since.

“One thing I have done differently since testing positive is that I make sure I have a conversation with all of my sexual partners about my HIV status and STI status, and theirs,” says Cockrell, an analyst for a health insurance software company. “I can’t take for granted that people read my profile on hook-up apps,” he says.

“Many people in the LGBTQ community who are HIV-positive are stigmatized in so many ways. Instead of stigmatizing individuals, I wish we would start an authentic conversation. Instead of using words such as ‘clean’ to describe someone who doesn’t have HIV or an STI, let’s ask when did they have their last HIV screening, and what was the result.”

At the age of 27, Nestor Josue Rogel is a long-term survivor. He was born with HIV.

“Having been born HIV-positive, I’ve been on treatment for as long as I can remember. However, it wasn’t until I was 12 that I was told I was taking antiretrovirals.

“Having to take a pill every day can blur in my mind,” admits the HIV outreach specialist. “Taking my medication every day can be difficult because I don’t remember if I took it that day, or if I’m just remembering from the day before.

“Being born with HIV, I have known that it is a part of me. But I don’t think I’m different; I am human, like everybody else.”

Lenworth Poyser had a feeling, so he wasn’t surprised when he tested HIV-positive in September 2011. “I’m still not sure what that feeling was,” he says. “I was well informed about HIV, so I knew where to get tested and knew not to flip out—even if my imagination got carried away for a couple days. I asked a close friend to go with me.”

Confirming his feeling has made Poyser more decisive about his life. “I tend to work out and exercise more than I did before my diagnosis,” Poyser says. “I decided to take my fitness goals a little more seriously, and that makes me feel more confident about myself and what I can achieve. I always wanted to be a more serious musician, and becoming HIV-positive made me want to chase after my goals harder than before. Hopefully, in a few months, I’ll be releasing my first independent country music album.”

For now, Poyser is a health educator for the B3 Project, an intervention and support program for HIV-positive young gay men of color ages 12–24, at Children’s Hospital Los Angeles. His job keeps him knowledgeable about new HIV treatments, even as he’s aware of the challenges of adherence and stigma.

“I’m really excited to see how the [long-acting] antiretroviral injection treatments being studied will work out,” he says. “I think taking a pill can be a source of stigma for many people, even among the young men I work with at the B3 Project. I hope that a once-a-month injection will get more people [to be adherent]. Once that happens, new infection rates will hopefully drop.

“The average person still thinks AIDS is inevitable for someone living with HIV,” Poyser adds. “Trying to explain to people that I’ll be fine can be exhausting. Why don’t more people know more about HIV?”