What does an HIV cure mean to you?

In a large survey conducted among people living with HIV in the United States* we asked the question: “What Does a ‘Cure for HIV’ Mean to You?” Over two-thirds (68%) of respondents stated that having HIV completely eliminated from the body (akin to an “eradication” cure) and having no risk of transmitting HIV to others would be meaningful to them. Further, 64% of respondents mentioned that not needing HIV treatment ever would be the meaning of a cure for them.

Less than half of the respondents stated that having no risk of opportunistic infection (47%), no HIV treatment needed now (40%), and having a negative HIV test (30%) would be equivalent to a cure. 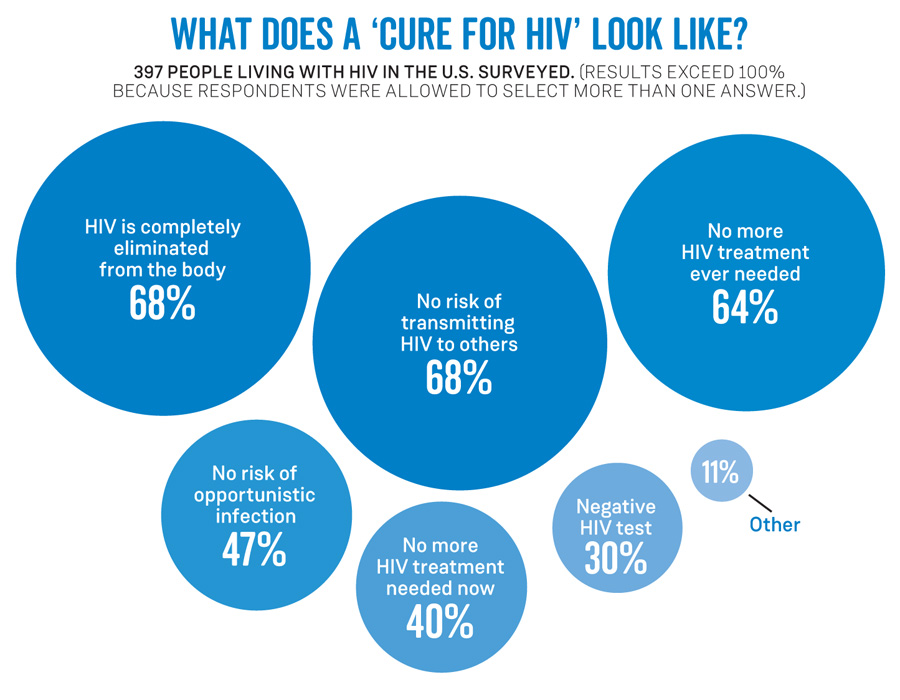 We also analyzed the qualitative data submitted as part of the “Other” category (11%). The theme of freedom was predominant, as shown in the word cloud. Comments such as: “A life free of stigma, secrets and medications,” and “freedom to go on a long vacation for more than 30 days without worrying about running out of ARVs,” were emblematic answers. Freedom from stigma was also an important theme: a cure would “mean that I would not think of myself as ‘tainted’ anymore and could feel more at ease with others,” wrote a respondent. The emphasis on freedom is consistent with answers received during a similar exercise conducted during the 2016 International AIDS Conference in Durban, South Africa, where a large portion of respondents said that a cure for HIV infection would mean “freedom” to them.

People living with HIV would also value having HIV completely eliminated from their body. This was reflected in the qualitative answers as well. For example, respondents said that a cure would be “the elimination of an active, progressive virus” or “dead virus that cannot reproduce.”  People living with HIV also absolutely value not being able to transmit HIV to others: “absolutely no risk of giving it to someone else through any means.” Other responses had to do with not having to take HIV medications or taking medications less often: being “pill free,” “medications taken twice a year would be good,” “five-year window with no need for treatment,” and “maybe a quarterly shot” were representative answers.

Several people dreamed of having improved immune function. For example, respondents said that “immune system brought back into balance,” “reversal of immune system damage,” or “no vulnerability to my immune system” would be a cure for them. Yet, others stated that being undetectable for HIV in the blood would mean that they were cured.

Finally, respondents also expressed that a cure would mean “joy,” “peace,” and “trust.” It would mean “living longer” and “having a better quality of life,” and “no chance of reinfection” and “no further risk to the general public.” A cure would also mean “stopping the suffering of millions,” “that millions of people could be cured,” and “that others will not know what it is like to live with HIV.”