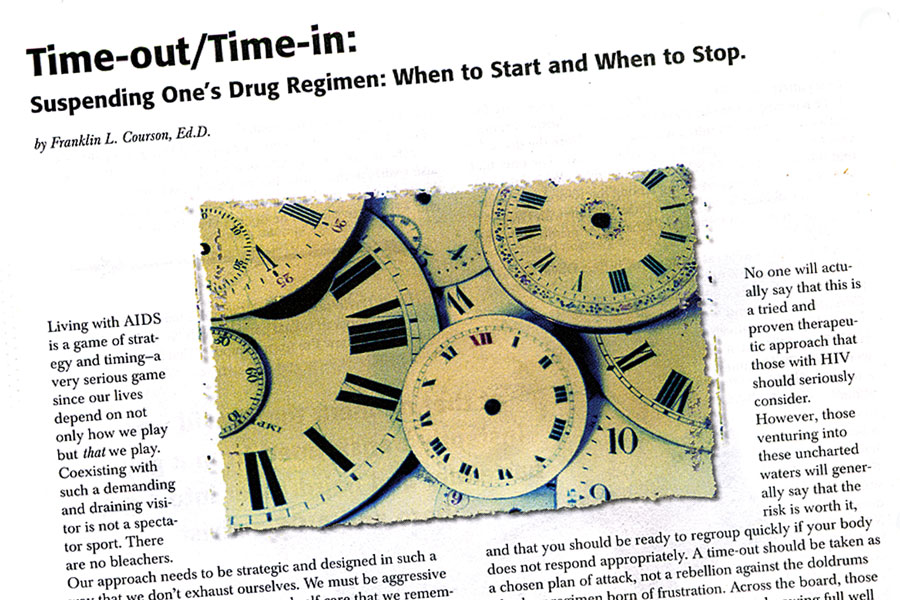 I enjoyed this issue of POSITIVELY AWARE, (Winter 2017/2018, The Cure Issue). I was especially interested in the article “Time Out.” It was a bit of déjà vu for me. Back in 1999, [then PA editor] Steve Whitson commissioned me to write an article regarding my experience with AIDS. I have been living with AIDS since 1990 and have, like many long-term survivors, gone through the wringer of drug trials, drug interactions, opportunistic infections, and the general challenge of living with a virus that entered not only our bodies but our psyches as well.

Back then, taking a break from treatment meant taking what was called a “drug holiday.” Interestingly enough, my article was titled “Time Out/Time In: Suspending One’s Drug Regimen” and was included in the September + October 1999 issue entitled “HIV–An Owner’s Manual” [an issue devoted to HIV basics].

Taking a time out is not for the faint hearted. I am attaching a copy of my article. You might find it interesting to compare some of the information with that in the current article.

My time out lasted 11 weeks. That was in 1998. Over the next period of nearly two decades, I have taken other time outs. They have lasted anywhere from five to 16 weeks. During each one, my body kick starts itself and the emotional residual effects remain long after starting back on the drug regimen.

During those years I was a caregiver and “death coach” to many, burying more than 250 of my best friends. I continue that work even today as a certified hospital chaplain. The work that continues to draw me in is oncology, the ICU [intensive care unit], and full cardiac arrests in the ER. I know the daunting feeling of facing a terminal diagnosis and am able to work with patients and their families in dealing with hard news.

I also know that when the human spirit refuses to give in and decides to fight, that miracles can and do happen. While chemo, radiation, and aggressive drug therapy can stabilize patients, the mental and spiritual attitude of the patient is paramount to any recovery. This is true of any approach to those living with HIV/AIDS when they consider a drug holiday.

For good or bad, my medical journey has been complex, challenging, and a compelling model for study, especially in the area of HPV [human papilloma virus], which is a conversation in itself. Here in Asheville, I have helped raise awareness of HPV in men who have sex with men. Now, instead of having to travel to New York to see my long-time surgeon, Steven Goldstone—who pretty much wrote the book on the subject—I can be tested and treated, if need be, here in Asheville. I am attaching an article that I wrote about that as well. It is a mix of humor and practical advice. Having had 13 surgeries, humor is about the only way one can get through the experience. Goldstone would give copies to some of his patients to help them cope. Today, instead of incisions with sutures, oblation is the treatment of choice, but even that is not as easy to deal with as some doctors suggest.

I want to thank you and your staff for taking on some rather edgy topics. As I have told people over the years, “We long-term survivors survive because we aren’t afraid to be on the cutting edge of change, but being there can sometimes give you a paper cut.”

Editor Jeff Berry responds: Thanks so much for your email. It’s interesting how the titles were similar, but as you say, a lot of things have changed since 1999!

The article “Time Out” in our latest issue on HIV cure looks at treatment interruption only as a strategy for potential drug candidates for cure research, not for taking a drug holiday. As you are probably aware, studies have not borne out the utility of treatment interruptions as an effective strategy, and it should only be used in very specific situations such as drug toxicities, surgery, or in the setting of a clinical trial, and even then only under the close supervision of a licensed medical provider. The SMART study, which was designed to test the effectiveness of treatment interruptions, was supposed to have gone on for nine years, but was stopped after only 18 months due to an increase in morbidity and death in those interrupting their treatment.