Dispatches from the Emerald City 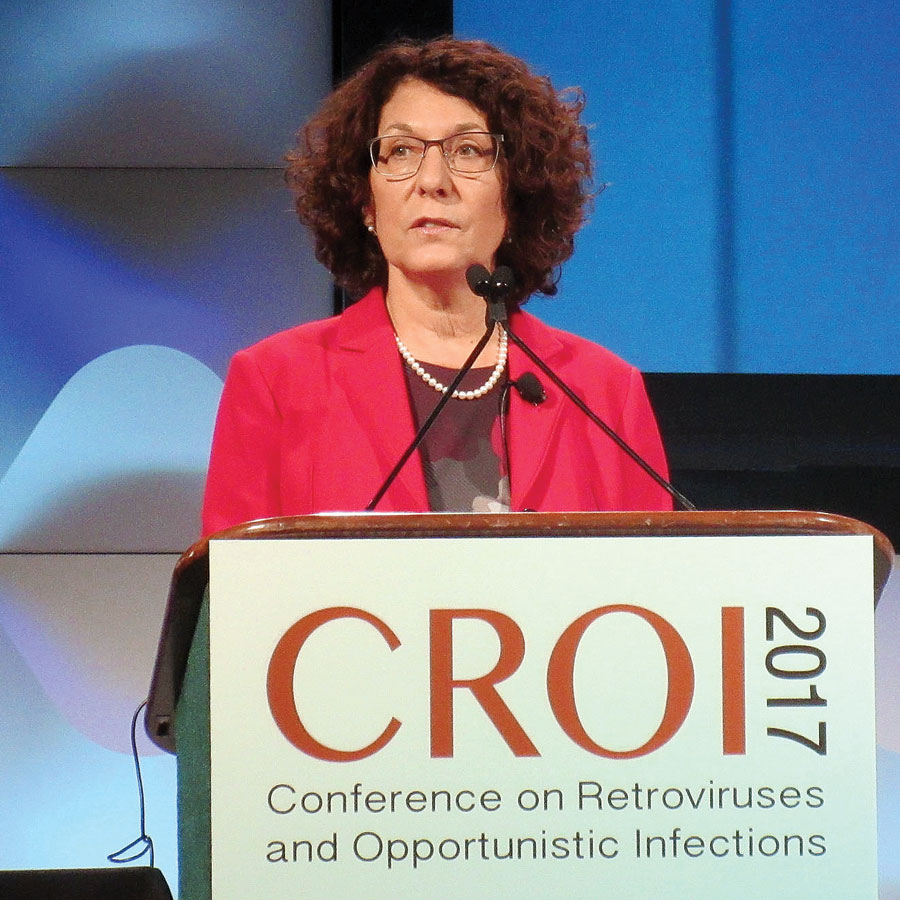 “These restrictions threaten to interrupt the exchange of scientific research information that is vital to the global response to health threats such as HIV/AIDS, Ebola, Zika, and many other infectious diseases,” said Susan P. Buchbinder, MD, of the San Francisco Department of Public Health and chair of this year’s CROI. “As a consequence, the restrictions endanger rather than protect the health and wellbeing of Americans and people all over the world.”

The declaration came in response to a presidential Executive Order signed January 27 that temporarily bans travel to the U.S. by citizens of seven Middle Eastern countries. The order may have affected travel to CROI by medical providers and scientists from the Middle East.

For many years now, researchers looked to see if HIV treatment could continue to be effective when using fewer medications. Currently, therapy consisting of three HIV drugs continues to dominate therapy, even if taken as only one or two pills.

It was in the spirit of treatment simplification that a two-drug regimen of Tivicay (dolutegravir) and Edurant (rilpivirine) was studied in virally suppressed (undetectable) individuals being switched from the HIV therapy they were using.

Results were good, since nearly all individuals remained undetectable on the new combo, but providers had mixed responses to such a switch.

One prominent doctor questioned the thrill of hooking up a tolerable, easy-to-take drug like Tivicay with a medication that needs to be taken with a meal and can’t be used with proton pump inhibitors (like Prilosec OTC) or H2 blockers (like Zantac).

The combination also consists of two pills, when Tivicay is available in the single-tablet regimen of Triumeq (which, like most HIV drugs, has issues of its own). A fixed-dose tablet of Tivicay/Edurant, however, is expected to be approved this year or next.

Others, however, point to the potential benefit of eliminating the nucleoside analog drug class as a background for an HIV therapy. Called “nukes” for short, the class is the oldest in HIV drug treatment. Although better nucleosides became available over the years (such as TAF), eliminating them altogether may further reduce the risk of their potential side effects. These include potential kidney toxicity and bone problems.

POSITIVELY AWARE editor Jeff Berry switched to Tivicay/Edurant years ago when he wanted to stop taking Reyataz due to the yellowing that it caused, harmless though it probably was to his health. He takes the medications with his breakfast and loves his therapy.

A Chicago nurse specializing in HIV pointed out, however, that, “Jeff knows where his next meal is going to come from. You have to be real deliberate about your calories with rilpivirine. The food requirement is a real thing. Some people don’t know when their next meal is coming. [Moreover], for people who are controlled [undetectable], I say ‘why?’ Three drugs seems to be the charm.”

The research team noted in their report that rilpivirine was used successfully in previous switch studies. They also pointed to the high barrier to drug resistance from dolutegravir, which can help keep the drug working for much longer times compared to those with a low barrier to resistance. To date, in fact, drug resistance to dolutegravir has rarely been seen.

For those who meet the requirements of rilpivirine, it has the “safety, tolerability, and efficacy [that] make it an optimal partner” for dolutegravir, the research team noted.

They concluded that, “A dolutegravir + rilpivirine two-drug regimen offers the potential for reduction in cumulative ART [antiretroviral therapy] exposure, without an increased risk of virologic failure.”

This Phase 3 research looked at combined results from the SWORD-1 and SWORD-2 studies. A total of 513 patients switched to DGT/RPV and 511 stayed on their original therapy. For people in both arms of the study, 95% were undetectable. Unlike most HIV treatment studies, there was a high number of women (21% and 24%) and more people over age 50 (about 30%). The majority of participants (70%) had more than 500 T-cells.

Rilpivirine cannot be used by people with more than a 100,000 viral load or less than 200 T-cells, but that did not matter here because this was a switch study with people whose virus was under control and who had more than 200 T-cells.

Doravirine, an HIV drug in development, was found to be non-inferior to darunavir (brand name Prezista) at 48 weeks. Darunavir is the only protease inhibitor medication recommended for first-time use by U.S. HIV treatment guidelines. Doravirine is a non-nucleoside medication, a drug class that includes efavirenz (brand name Sustiva, found in Atripla). A co-formulation with the generic versions of Viread and Epivir is in the works, which should help bring down price. On the other hand, doravirine has not been compared to an integrase inhibitor (INSTI), which are the drugs to beat in HIV treatment today (aside from the protease inhibitor Prezista, found in Prezcobix).

In this study, the treatment-naïve individuals in the study were 80% (darunavir group) and 84% (doravirine group) undetectable (less than 50 copies viral load). That’s a lower success rate than is expected in HIV treatment today, but was thought to be affected by the number of people who quickly dropped out of the study when they saw how many pills they had to take. Those drop-outs were counted as virologic failures.

Unlike other INSTIs on the market, both bictegravir and dolutegravir are unboosted (they don’t require another medication to raise their blood levels). Moreover, they were studied with a background of emtricitabine (FTC) plus tenofovir alafenamide (TAF), not the previous standard nucleoside med, tenofovir disoproxil fumerate (TDF).

“Integrase inhibitors are increasingly important as part of therapy,” presenter Paul E. Sax, MD, said. “The results were outstanding for both treatment arms, with 97% and 94% suppression [BIC and DTG, respectively). Both regimens were extremely well tolerated.”

Because bictegravir is not metabolized through the kidneys, renal insufficiency should not be a concern. Moreover, TAF has been shown to be safer on the kidneys than TDF. There’s also new evidence of insomnia with dolutegravir and the other INSTIs, which may make bictegravir more attractive to some—if further research doesn’t find the same effect.

Good news for the salvage therapy set to be approved as an orphan drug this year for people in great need of a new HIV medication. Although ibalizumab is taken as an IV infusion every two weeks, a study found that a bi-weekly intramuscular injection had equivalent pharmacokinetics to an infusion. An 800 mg injection was compared to an 800 mg IV infusion. The injection maintained effective concentration during the dosing period. The medication will need to be taken with another active drug (one to which the patient has not developed drug resistance).

Winston C. Tse, PhD, of Gilead Sciences reported that a 10-week single dose they examined provided proof of concept for possible efficacy against HIV with this type of medication. “We’re very excited that this has potential for long-acting activity,” he said.

“While HIV capsid (CA) plays an essential role in multiple stages of the viral life cycle, it remains an unexplored target for antiretroviral (ARV) therapy,” reported the researchers from Gilead in their abstract.

In this test tube research, it also appeared that some of the capsid inhibitors may work against some drug-resistant HIV.

Other drugs in development

A host of HIV drugs in development were presented in the session titled “I Want A New Drug” (webcast available). Judith S. Currier, MD, of UCLA, and CROI vice chair, said at the opening press conference, “It’s really important and encouraging to see data on new drugs for HIV. While we have good drugs, there’s room for improvement.”

A study of dolutegravir used by itself increased the risk of treatment failure and the development of drug resistance.

The poor results of the study seemed to put the final nail in the coffin for this simplification strategy in the minds of many. Previous attempts at HIV therapy with a single drug have also failed.

“Although DTG monotherapy was non-inferior to cART [continued antiretroviral therapy] at week 24, virologic failure continued to occur after week 24 and led to DTG resistance in three [patients],” the researchers wrote in their abstract. “The genetic barrier of DTG monotherapy is insufficient to allow for maintenance monotherapy.”

Truvada for PrEP in women

Bacteria found in the vagina may have a negative impact on the absorption of tenofovir when used in the form of a gel or film. However, it did not seem to affect doses of the drug when taken orally. Tenofovir is used for HIV prevention in the form of the drug Truvada. Gel and film formulations with tenofovir, which are placed inside the vagina, are still in the experimental stages. (Webcast available.)

A gay Amsterdam man became HIV-infected despite adequate adherence to PrEP, according to a report from that city. After eight months of taking the HIV prevention pill, he had an indeterminate result on the best HIV test available today, a fourth-generation HIV antibody/antigen test. He later seroconverted to HIV-positive with a 40,000 viral load. HIV treatment was successful in bringing his viral load to undetectable levels and his virus showed no sign of drug resistance.

In his Really Rapid Review of CROI (go to thebodypro.com), Dr. Paul Sax said that, “The case illustrates the likely importance of ‘inoculum’ in PrEP failure—the person had a very high number of potential exposures. It’s worth looking at the full poster presentation [Hoornegorg, #953], as the clinical and laboratory manifestations of acute HIV infection were unusual, possibly influenced by being on TDF/FTC [Truvada].”

FOR MORE DETAILS from these reports presented at CROI, go to croi2017.org. Some presentations available in a webcast.