Back to the Future

In a way, the story of ibalizumab is a time travel tale back to 1994, before any protease inhibitor drugs were approved, bringing with them the era of powerful HIV combination therapy, of “Lazarus rising from the dead.”

That breakthrough came at a cost—the drugs produced side effects that made people stop taking treatment. HIV drug development then continued its uphill climb, searching for newer and better medicines that people could easily tolerate. Fast forward to the present, and today’s HIV medications are amazing in comparison.

But there are patients from the early years for whom most drugs soon failed regardless of side effects.

That’s why the IDWeek report on a new treatment in development, ibalizumab (IBA), was so important. It was shown to work well for people who have no viable HIV treatment options left.

IBA could be approved by the U.S. Food and Drug Administration as early as this summer, and is actually available now to people who need it. It has virtually no side effects and no drug interactions.

But it comes with one big hurdle: it has to be given via IV infusion every two weeks. The infusion takes about 40 minutes. There are hopes of creating a subcutaneous injection formula.

Another great difficulty will be cost. If this is effective therapy for a relatively small group of people—however lifesaving—how can the cost be controlled?

Ten years after advocating for salvage therapies for people who have run out of effective HIV treatments, activist Nelson Vergel was fortunate to enter a study with ibalizumab. His CD4+ T-cells jumped from 220 to 483. Within a period of about three weeks, his HIV viral load was undetectable for the first time after more than two decades of living with the virus. The other four patients in his Houston doctor’s office who were also in the study are also undetectable.

“Salvage” sounds so ugly. Yet there it was. Many people, for one reason or another, could no longer benefit from HIV medications. They had developed multi-drug resistant (MDR) virus. Their virus could no longer be controlled by medications. But HIV viral load needs to be suppressed to help people live and be healthy.

“Most of us, including me, who have multi-drug resistant virus volunteered for two or three studies in our lives and every study—because we had no other option—exposed us to functional monotherapy,” he said.

They developed MDR virus in part because they put their bodies on the line in the search for HIV treatment at a time when it was not yet known that HIV drugs must be taken in combination in order to work best. They went on one drug after another, in one study after another. That’s monotherapy, instead of the combination therapy needed to bring down HIV viral load.

“So we should be treated as veterans of the clinical trials,” he said. “We got other drugs approved, but we sacrificed our health in the search for treatment.”

“The issue of multi-drug resistant virus in HIV is not a huge problem in that we see the continued success of combination therapy, one pill once a day,” said Jacob Lalezari, MD, the lead researcher on the ibalizumab study—TMB-301—presented at IDWeek, in an online video discussion about the IBA findings. Lalezari is the medical director of Quest Clinical Research, in San Francisco. “Most of the patients in our clinic are doing fine. This drug is really about addressing the needs of those left behind, the most vulnerable people …. In many ways they are the victims of the success of HIV drug development, because these once-a-day therapies are working so well and the bar is set so high that it’s very difficult for companies to bring new molecules with new mechanisms of action into the clinic.”

Of note, the 40 patients in this study needed to have at least one other medication they could take that was active against their virus—one to which their HIV was not resistant.

For half of the study participants, that second active compound was another treatment which acts in the same area of viral infection that IBA does, at the cell entry stage. This one treatment on the market is Selzentry (maraviroc; see also page 9). Although both IBA and Selzentry are HIV entry inhibitors, they work in different ways. Selzentry is a CCR5 inhibitor and IBA is a monoclonal antibody.

Starting with two new therapies active against their virus keeps people from the functional monotherapy of just adding ibalizumab to a combination of HIV drugs to which they are already resistant.

Looking to meet FDA requirements for bringing ibalizumab to market, this was the first phase 3 study—the last step before FDA approval—in HIV history that didn’t use the standard randomized trial design in which different people receive different therapies. Instead, everyone received IBA, because of the need to speed up the process in getting to approval. This new study design was created by the FDA to facilitate testing of new HIV medications for patients with limited treatment options.

The research team documented treatment failure (a detectable viral load) for their patients at Day 1 and Day 7. On Day 7, study participants were given a 2,000 mg loading dose of ibalizumab, via IV. At Day 14, the researchers optimized the therapy with a new drug. Thereafter, participants received an IV infusion of IBA once every two weeks, except now they were given a lower maintenance dose of 800 mg, as part of their treatment regimen.

At two weeks (Day 14), 83% of patients (33 out of 40) had experienced an HIV viral load drop of greater than half a log. (A “log” is simply a mathematical measure for dealing with extremely high numbers.) This is important, said Lalezari, because a half-log reduction of virus has been shown in other studies to be associated with a 33% decrease in mortality.

These results were no easy feat. The study participants were, as one medical provider said, “at the very end of sustainability.” A third of them had fewer than 10 T-cells. The patients were so ill that four of them died before the 24-week study ended. The cause of death included cirrhosis and Kaposi sarcoma. None of the deaths were related to ibalizumab.

The average time of living with HIV was 21 years and the average T-cell count was 161. Nearly one-third of them (28%) had taken more than 10 previous HIV medications.

“So, very significant antiviral activity with ibalizumab in this most difficult and vulnerable population,” Dr. Lalezari said in the video. “Not enough to stop the virus as a single agent, but definitely an important new tool with which to cobble together a new regimen—potentially the last regimen—for a patient to both get their virus under control and then prevent the spread of that virus to someone else. It’s the first of long-acting treatments that are changing the treatment paradigm towards a less frequently dosed regimen for a subset of patients. But the importance today is for a unique mechanism of action active against multi-resistant virus.”

It’s possible that IBA may be the “last chance” for some people, Lalezari said during a press conference at IDWeek. “It’s very good and may be all we have right now.”

“I’ve been lucky to have five years of health,” Vergel said. He and the others in the study were able to continue on ibalizumab after the 24-week study concluded when IBA went into expanded access, a process created for those who are urgently in need of new treatments that have not yet received FDA approval.

When the small company behind ibalizumab, TaiMed Biologics USA, started having financial difficulties in developing IBA, Vergel urged them to apply for orphan drug status as a way to cut the time and money needed to bring it to market. Orphan drug status is justified for populations of under 200,000 patients. The population of patients with MDR HIV fit into this requirement. In addition, the FDA granted a Breakthrough Therapy designation to IBA.

“I want to thank the FDA for agreeing to allow this to be an orphan drug because that was the only way the company could continue to work on getting it approved,” said Vergel. “They didn’t have enough funding to proceed. Without the drug my viral load would bounce back up. I would be lost. There’s nothing else out there.

“Different people will tell you different things about the size of the multi-drug resistant population,” Vergel said. “There’s definitely less than 50,000 of us and probably less than 20,000 of us, so obviously the FDA said yes to the request. It will be the first orphan drug to be approved for HIV in history.”

Vergel said that’s both good and bad. It’s good because it brings IBA to market faster and helped TaiMed to raise more money for its development. The bad part is that orphan drugs are priced very high because of their limited market. 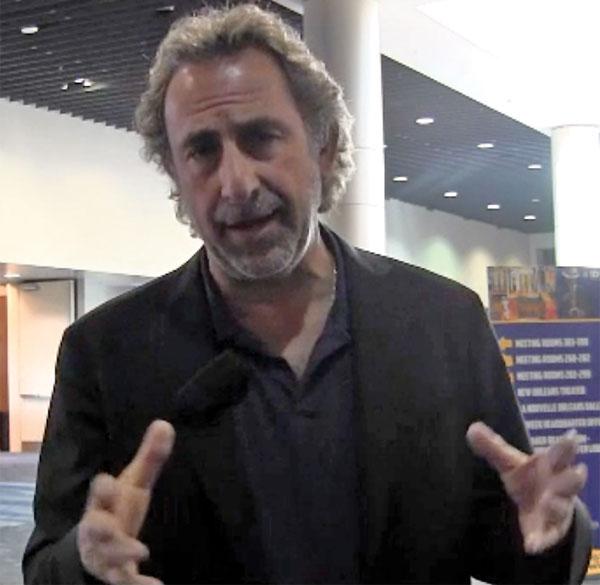 Like Dr. Lalezari, he found the results encouraging and an opening for other therapies in the future.

WATCH the short video of Dr. Lalezari explaining the IBA study at bit.ly/2f2b37j. For more information on the TMB-311 expanded access study of ibalizumab, go to clinicaltrials.gov.