Nina Martinez continues to shine a light on stigma

For POSITIVELY AWARE’s anti-stigma campaign, A Day with HIV, Nina Martinez submitted a picture of herself last year preparing to run a marathon. So, how did she do in the race?

“I finished,” she said, pausing before sheepishly adding, “My time was 6 hours, 34 minutes.”

Although she had previously run in half-marathons, raising money for youth-focused HIV prevention organizations, this was her first 26.219-mile race. “I clearly did not train enough for it,” the 33-year-old said. “Around mile 17, things started to hurt. When I started reaching my pain threshold, I just started reciting in my mind all the clinical pain I have overcome: This is no worse than having C diff [Clostridium difficile, a common cause of bacterial diarrhea among people living with HIV]. That’s how I talked myself through it.”

MARTINEZ AND her twin sister were born 12 weeks premature in San Jose, California. At the time, in the early 1980s, blood needed to be drawn frequently for lab tests. As a result, both Martinez and her sister developed anemia, requiring blood transfusions. Six weeks after she had been born, Martinez became HIV-positive through a transfusion. (Her sister was being treated in a different hospital and does not have HIV.) “I don’t want any other child to go through what I went through,” Martinez said. It’s that desire to protect and educate others that propelled her to work in public health, focusing on HIV and sexually transmitted infections.

It wasn’t until she was eight years old, however, that Martinez was diagnosed with HIV.

“At that age, you don’t even know what HIV is,” she said. “Being the only person in your family who has HIV is a very isolating experience.” HIV isolated Martinez even from her twin sister.

“It’s even more difficult when you have a sibling with whom you’re supposed to have a lot in common, but she didn’t have to grow up with what I grew up with,” Martinez said. “In many ways, [my sister] was reflective of the life I could’ve had. That was difficult for me to accept. My life could have been different—not only because of the virus, and because of having to take a number of medications, but because of stigma.

“Certain things are just not talked about,” Martinez said. “A lot of the communication—or lack of communication—about HIV in my family was driven by Latin culture. Saving face is a very Latin thing, but I think there would be a lot less stumbling around in life if people just talked about things. Even if you don’t know what to say, just the fact that you’re trying can do so much. You can’t know what the right thing to say is if you don’t say anything at all.

“I didn’t have the opportunity to process any feelings about being HIV-positive because it was just never brought up,” she said. “Since I wasn’t sick, my family felt there wasn’t the need to talk about it.” 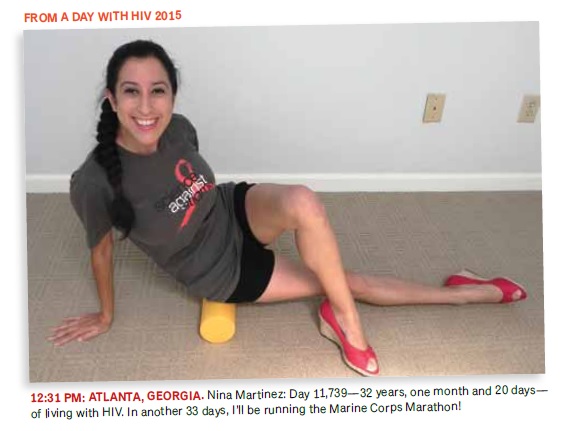 MARTINEZ LEFT HOME for Washington, D.C. to pursue a college education, which she completed in 2005. Being a Latina living with HIV, she sees a connection between stigma and racism.

“I knew had a clinical understanding of HIV, but it wasn’t until I moved to Atlanta that I started to learn about other HIV-related issues such as HIV criminalization, and how that’s a form of stigma, and the role that race plays in HIV prevention and treatment,” she said. “I’m certainly more aware of many forms of stigma, and it hurts me. I have friends who are gay and HIV-positive, and it saddens me that people look down upon my friends just because of who they love, or their HIV status. Homophobia and racism—these are things that I did not grow up with.”

Martinez recalled her first encounter with racism, aboard a city bus soon after she had moved to Atlanta to pursue graudate work in public health.

“Someone asked me where I was from,” Martinez said. “For military kids, that question is complicated to answer. My father was in the Navy; we moved to eight cities while I was growing up. I mentioned I had just moved from Washington, D.C. The gentlemen said, ‘No, where are you from?’ I thought that was weird. He then asked, ‘Where were you born?’ I told him, California. But he persisted. ‘No,’ he said, ‘where’s your mom’s family from?’ Texas, I answered. ‘Where’s your dad’s family from?’ he asked me. New Mexico, I said. I was confused where this was going. And then his son piped in, ‘You’re not answering his question! You’ve got some Mexican in you, don’t you?’ That was my first overt experience with racism.”

Since then, Martinez’ education efforts have focused on addressing stigma and racism. “A lot of conversations these days are centered on race,” she said. “How does race play into your everyday interactions? How does race make it easier or more difficult to do this, that, or the other thing? You could replace ‘race’ with ‘HIV’ and still have the same sort of conversation.”

MARTINEZ SEES A Day with HIV as another way to educate while combating stigma. “A Day with HIV is different because it gives a glimpse of what life with HIV is, or can be, beyond the bottles of pills,” she said. “What it does is allow people to shine a light on any particular moment of their lives beyond HIV. Most of the pictures that are submitted have nothing to do with pill bottles. A Day with HIV tells people that our days with HIV look much like yours. It sends the message that you can still live your life and still do the things you had planned on doing. That can make a big difference to someone who is scared of getting tested or of getting into treatment.”