In June, the FDA approved a new combination pill for the treatment of hepatitis C virus (HCV), Epclusa, giving it a Breakthrough Therapy designation for a medicine that may offer a major advance over existing options. Epclusa treats all HCV genotypes, 1–6. It consists of sofosbuvir  (brand name Sovaldi) and velpatasvir (not available separately). Epclusa is the first singletablet regimen approved for genotypes 2 and 3 without the need for ribavirin.  For more information, go to positivelyaware.com/epclusa.

In July, the Department of Health and Human Services updated its HIV treatment guidelines. Descovy has been added to the list of recommended and alternative drugs to use. Kaletra (lopinavir/ritonavir) was removed from the list of “Other” medications to take “because regimens containing this protease inhibitor (PI) combination have a larger pill burden and greater toxicity than other currently available options.” The sections on women, pregnancy, hepatitis B, hepatitis C, and tuberculosis were also updated. For a quick review of these and other updates in “What’s New in the Guidelines?” go to https://aidsinfo.nih.gov/guidelines/html/4/adult-and-adolescent-oi-prevention-and-treatment-guidelines/0.

The National Institutes of Health (NIH) announced in July that it has awarded approximately $30 million annually for the next five years to six research teams working towards an HIV cure. The awards, part of the Martin Delaney Collaboratory, promote basic medical science toward a cure.

Preclinical and Phase 1 data on an HIV medication in development, bictegravir (GS-9883), provided proofof- concept for further research. The drug is now in Phase 3 study as a singletablet regimen (STR). Gilead Sciences announced the data in a poster at the American Society of Microbiology (ASM) Microbe 2016 Conference in Boston, held in May. The company reported that bictegravir demonstrated an improved resistance profile compared to other drugs in its class, integrase inhibitors.

In the latest news from the landmark PARTNER study, there continued to be zero transmissions of HIV to an HIV-negative partner during condomless sex from a positive partner who had undetectable viral load while on treatment. Suppressed viral load was defined as less than 200 copies. i-Base, in London, put together a question-and-answer factsheet on the PARTN ER results in Spanish and English (i-base.info/qa-on-the-partner-study) and Spanish (i-base.info/preguntas-y-repuesta-sobreel- estudio-partner).

In May, Gilead Sciences announced that it was voluntarily withdrawing its HIV drug Vitekta (elvitegravir) from the market, to take place in February 2017, due to low use—fewer than 50 patients in the U.S. The medication is usually taken as part of the singletablet regimens Stribild and Genvoya. The withdrawal will not affect those medications.

In July, Kaiser Permanente Northern California health care reported PrEP (pre-exposure prophylaxis) data ahead of print publication in JAIDS. Of 972 members who began taking the HIV prevention pill (Truvada) between July 2012 and June 2015 and had at least six months of follow-up, none became infected with the virus while using it. Two who stopped taking PrEP when they lost their insurance coverage, however, did become infected with HIV.

PrEP may reduce new infections by a third

PrEP has the potential to reduce new HIV infections in men who have sex with men (MSM) by a third over the next 10 years, according to a mathematical modeling study published in the Journal of Infectious Diseases (JID) in July. According to a press release from the Infectious Diseases Society of America (IDSA), publishers of JID, that decrease may be seen if 40% of MSM who are good candidates for PrEP based on CDC guidelines were actually prescribed the drug and used it consistently.

The Los Angeles LGBT Center has created a 2-minute video promoting AB 2640 as well as a petition addressing the California state legislature that can be signed by anyone. According to the petition, “AB 2640 is common sense legislation that would simply ensure that people who test negative for HIV will receive information about all the methods that reduce their risk of infection, including PrEP and PEP, from the healthcare provider who tests them.” Go to youtu.be/ yeBgXX_pwEA.

In June, Gilead Sciences released data on uptake of the company’s HIV prevention pill, Truvada for PrEP. The number of people taking PrEP increased five times in a period of nearly four years: 74% of them were white, compared to 44% of all new HIV infections in the U.S. being among blacks in 2014. Black people made up 10% of PrEP users in the analysis. Latinos, who made up 23% of new infections in 2014, made up 12% of PrEP users.

The Greater than AIDS campaign in July launched Empowered: Trans Women & HIV, a powerful video series in which trans women talk about the challenges they’ve overcome in their lives and about the issues negatively affecting their community’s safety from HIV. There are also factsheets on topics such as getting tested for the virus and drug interactions with hormonal therapy. Go to empowered.greaterthan.org.

GLAD (GLBTQ Legal Advocates & Defenders) announced that Phill Wilson, the founder and President of the Black AIDS Institute, will be the recipient of its 2016 Spirit of Justice Award in October. “I realized early on that the way to save my life and the lives of people I loved was to get involved aggressively in advocacy and in policy work, and really change the systems and the structures to be responsive to this disease,” Wilson was quoted in a press release from GLAD.

The will to end AIDS

“Today, combination antiretroviral therapy offers individuals with HIV nearly normal lifespans if they start treatment early and are able to adhere to their therapy. Buoyed by this stunning evolution, in September 2015, 193 United Nations member nations agreed to a bold idea that was once unimaginable—ending the AIDS epidemic by 2030,” wrote NIAID Director Anthony S. Fauci, MD, along with Deborah L. Birx, MD, in a guest editorial in a June issue of the online STAT News. Read the editorial at statnews.com/2016/06/06/ aids-free-generation/.

The Centers for Disease Control and Prevention (CDC) organizes the campaign “We Can Stop HIV One Conversation at a Time” specifically for Latinos, as part of its Act Against AIDS education efforts. According to the campaign website, “HIV and AIDS affect all communities, including ours. As Hispanics/Latinos, we are the largest and fastest growing ethnic minority in the United States, and we are also one of the groups most heavily impacted by HIV/AIDS.

“More than 1.2 million people are living with HIV in the United States and about 50,000 people become infected each year. As Hispanics/Latinos, we account for 23% of these new HIV infections and of those, 85% were in men and 15% were in women. Anyone can be affected by HIV regardless of age, gender, sexual orientation, or marital status.

“It may not always be easy to talk about HIV/AIDS, but we must talk openly about it to protect our community. By learning the facts about HIV and talking about ways to protect ourselves, our loved ones, and our community, we can help increase HIV awareness, decrease stigma and shame that are too often associated with HIV, and play a part in stopping HIV in the Hispanic/Latino community.

“We all have a role to play. We can stop HIV one conversation at a time. Together, all of our conversations can help protect the health of our community and reduce the spread of HIV.” 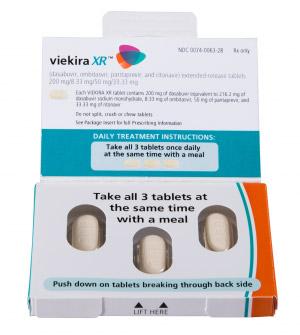 On July 25, the FDA approved Viekira XR, a once-daily version of Viekira Pak. Both hepatitis C virus (HCV) medications are approved for use by people who are coinfected with HIV. The Viekira XR dose is three pills once daily, taken with food, as compared to two pills in the morning and another one at night for Viekira Pak. For more information, go to positivelyaware.com/viekiraxr and bit.ly/16NhDL5.

Hillary Clinton’s campaign released an updated strategy in early August to tackle the HIV/AIDS epidemic both nationally and internationally. The updated plan comes after months of behind the scenes work by leading AIDS activists and over 90 organizations around the country, who met separately with both Clinton and Bernie Sanders earlier this year. The Donald Trump campaign did not respond to requests to meet with activists.

The updated plan includes a commitment to broadening access to bio-medical prevention including pre-exposure prophylaxis (PrEP), reducing the cost of prescription drugs, increasing investment in HIV/ AIDS research, and ending stigma and discrimination. What’s missing, say some, is a timeline on how exactly to achieve those goals. “She didn’t buy in. She didn’t adopt our date and our numbers,” activist Peter Staley recently told the Advocate, but then went on to explain. “She wants a larger panel of experts to review that. Frankly, that’s a pretty reasonable thing for her to counter with—that a larger coalition of experts and community, rather than just those who have been a pain in her ass the past few months, actually determine what an aggressive goal and an aggressive date would look like for ending epidemic levels of HIV transmission.”

On a related note, the Democratic Convention in Philadelphia featured prominent AIDS activist Daniel Driffin, who founded Undetectables Atlanta, a group of over 400 gay and bisexual men living with HIV, and co-founded Thriveness, a non-profit service organization. Driffin, a young gay black man from Atlanta, is the first person living with HIV to address the convention since 2004. “We know how to prevent the virus now. We know how to diagnose the virus now. We know how to treat it and we know how to suppress it… What do we do to fight HIV/AIDS today?” said Driffin during his address to the convention. “We invest in research and education. Expand treatment and prevention,” he continued. “And we elect Hillary Clinton.”