A legacy of surviving and thriving 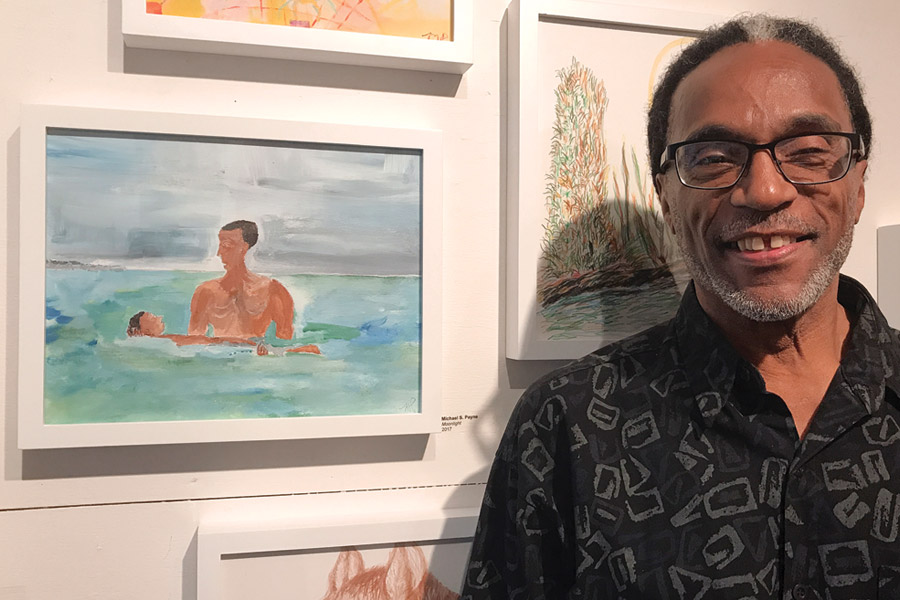 A TPAN bookmaking workshop provided Michael Payne with the creative outlet to express his feelings. Photo by Enid Vázquez

As always, Michael Payne had some of his artwork bought at the annual exhibit of TPAN’s art therapy group. Like the buyers and other attendees, I love Michael’s work too. His art stands out for its beauty or its power, or both.

In 2008, I helped Michael write a story called “Saved By the Art.” It remains one of my favorite stories of everything I’ve ever worked on for Positively Aware. It talks about how Michael had set aside his prolific artwork for years, away in a closet, until an art class at TPAN brought back his artistic spirit and he hasn’t stopped creating since. He went from suffering over his lipodystrophy—he was looking into surgery—to focusing on art, becoming a happy, creative spirit no longer dwelling on something he now saw as trivial and unimportant. That’s what I loved most, because Michael was—and is—a beautiful man. As usual with this condition, the changes in his face were disturbing to him, but not others.

I told him how much I loved that story. 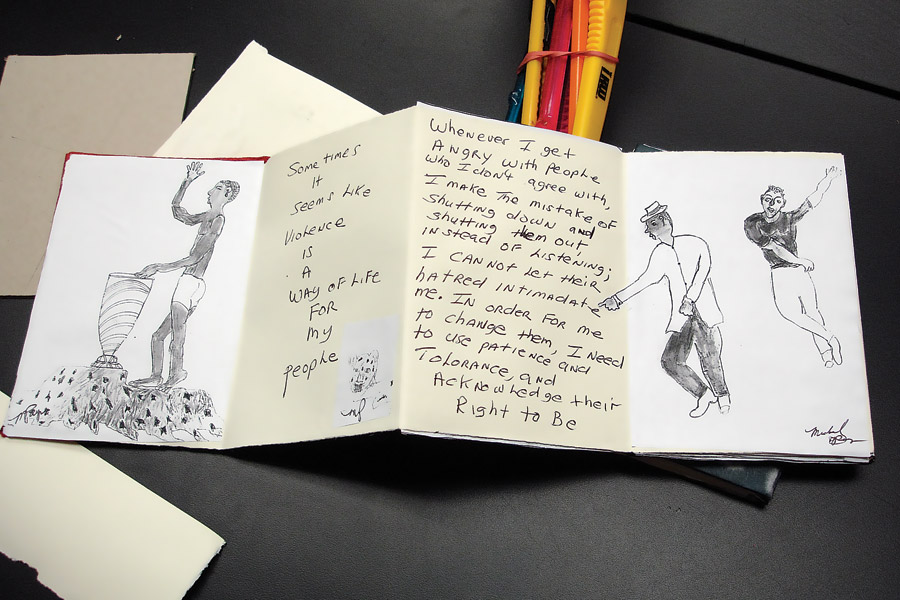 A TPAN bookmaking workshop provided Michael Payne with the creative outlet to express his feelings. (Photo by Enid Vázquez)

He said that while his sister was dying of cancer, he sent a copy to her. She never said anything about it, even though they talked every day on the phone.

“I used the article to come out to them,” he said, the first I knew about this, although I see Michael nearly every week. “It was my way of coming out as gay, and as HIV-positive.”

In his family, men weren’t supposed to be gay, he said. That probably didn’t mean much to his sister as she struggled with her illness. At one point, she told Michael, “All of that fighting over who would get mom and dad’s house when they died—that was a waste of time.”

Michael went on to tell me that during a recent meeting of BUS (Brothers United in Support, for black men), the group was joined in a conference call with a member who was very ill and in the hospital. Every man in the meeting spoke to him, saying their goodbyes. He died a few hours later.

I didn’t realize how strong their ties were. For a long time, BUS was the largest support group at TPAN. The group consistently had 20 members a week in attendance. Then for a few years, the group stopped meeting altogether. At TPAN’s urging, they picked back up about a year or so ago and it was as if they had never stopped. The members had stayed in touch with one another all along.

Michael talked about the annual BUS retreat to a Wisconsin campsite, and how spiritual the retreats were, how uplifting.

I remembered those retreats, and how much BUS members loved them and looked forward to them. I remember how they returned full of energy and excitement, high in spirit. I had heard of the medical presentations and the social events involved. I had no idea that there were any spiritual-based practices whatsoever for the retreats.

“There’s so much that TPAN’s done that’s been forgotten about,” Michael said.

TPAN moved its offices in May and I found a mounted cardboard exhibit of photos from a BUS retreat. What synchronicity. Stories and images continued to pop up.

A friend asked me over dinner how the buddy program was doing. I said we no longer had one. She said she recently saw her buddy. They get together once or twice a year since they were matched in the program 10 years ago. How astounding, I thought. We no longer even have the program—who knows how many people are still being served through services started long ago?

Someone told me about learning he was positive and thinking he was going to die and feeling desperate. He was given a copy of POSITIVELY AWARE and he called TPAN to join an HIV education series, but it was already full. “I’m going to die” he cried over and over, and space was made for him. He learned about the new medications and met with others living long-term with HIV. His despair lifted and never returned.

I’m constantly surprised at how much gets done through TPAN, and how the one hand doesn’t know what the other hand is doing. Volunteers and staff members are constantly helping others with amazing results, stories that are rarely shared. We do our work, as staff or as volunteers, and keep going as if it was just another day in the office.

Two months ago, Lisa Congelton, a volunteer from the early days in the 1980s stopped by the office. She looked around our office with wonder. “What are you thinking?” I asked. She said, “Honestly … I can’t believe that TPAN has a staff.”

It reminded me all over again of how TPAN—and by extension, POSITIVELY AWARE—was born in the living room of founder Chris Clason, and of how much work was done by volunteers.

At the new office, I told this story to one of our last remaining founders who joined Clason in his living room to help create TPAN, Bernard (Bernie) J. Brommel. He was in town to, among other things, help us plan for our upcoming 30th anniversary. Bernie is now in his 80s, relies on a walker (and husband Carl Ratner) to help him get around, and receives dialysis. But his brain and his spirit are as strong as ever. As a psychologist, he continues to be published.

When I told him what Lisa had said, he told me simply, “Me too.” He added one other point: “Hannah (Hedrick) and I took care of the rent.” That’s dedication.

That is survival. … All of it. I came across this during the move: “Through the grant from Burroughs Wellcome, POSITIVELY AWARE moved from an all-volunteer operation working out of the editor’s home to a staff of four in offices subsidized by a local business owner.” Burroughs Wellcome, which eventually became GlaxoSmithKline and today has all of its HIV medications under the ViiV Healthcare enterprise, provided the half-million dollar grant that turned POSITIVELY AWARE into a national magazine.

This year, our 30th anniversary, I’m sure we’ve forgotten the majority of our stories about helping people living with HIV to survive and thrive.

Last spring, POSITIVELY AWARE editor Jeff Berry sent an e-mail message to the staff after he came across a reference to the magazine by chance while out of town and eating dinner at a restaurant while browsing on his phone. In a bulletin board called Prison Talk for friends or family members of incarcerated individuals, he read about an inmate whose copy of POSITIVELY AWARE had been held up by the prison staff for months, but when it finally arrived, he read about a drug effect he had been suffering from that had his medical providers stumped. As a result, an adjustment was made.

“I have to tell you I was suddenly overcome with emotion and had to fight back the tears as I read the thread, and as my food arrived (I probably looked kind of silly, people probably thought my dinner date was a no-show!). It really spoke to me about why we all are in this work, but how sometimes we have to be gently reminded that the sacrifices we all make, the long days, the hard work, the (sometimes) thankless jobs we all do, that without a doubt it touches people’s lives, and it makes a difference. And many times we will never know how much of a difference we are making, or how many lives we touch. But I hope you are all aware that the work you do every day here at the organization does have a real impact on the lives of many, many individuals, so please take a moment and be proud of who we are and what we do, because I am proud of all of you.”

Join us Thursday, September 28, 2017 at Moonlight Studios in Chicago for TPAN: 30 Years of Hope, with special guest Peter Staley, HIV activist extraordinaire and early member of ACT UP. The struggle continues. Go to tpan.com for more information.