Sherri Lewis doesn’t enter a room—she explodes into it, like a bomb of positive energy. A brown-eyed brunette, she attracts people to her—everyone wants to be her friend. Petite yet powerful and looking decades younger than her 63 years, Sherri is HIV-positive, has been clean and sober since 1987, and was cured of hep C in 2015. “I wasn’t giving up, I was like a pit bull…you have to fight for it, they’re not going to just give it to you, those bastards,” says Sherri about her battle for hep C treatment.

Born and raised in New Jersey (and the accent remains), she now calls Los Angeles home. She was brought up in a dysfunctional Jewish family. Her father was “the husband who didn’t come home” and her mother spent her time “obsessing and chasing him” and yelling at Sherri. Incest was also part of the home life. “My family had no physical boundaries…and was touchy-feely in all the wrong places.” Even young Sherri knew that this was not appropriate. “I don’t think this is right, what’s going on here.” As a teenager, Sherri was molested by an uncle, but no one talked about it. She coped with the pain of being abused by using drugs, both street-based as well as her mother’s diet pills.

However, Sherri’s addiction story may have started when she was a young girl. She was given a tincture of opium (yes, this used to be a thing) for her anxiety caused by dealing with her family. “My mother left me alone with it and said ‘don’t forget to take your medicine.’” She made an innocent mistake and, instead of taking 10 drops from the dropper, she took 10 droppers full. She got very high (“It was a mistake but I liked it”) and when her mother came home she was furious instead of compassionate. She called the doctor, who told her to walk Sherri around and make her drink black coffee; otherwise she would have to get her stomach pumped.

By her teenage years, Sherri was using many different kinds of drugs: pot, speed, quaaludes, and her mother’s diet pills. She didn’t really have a drug of choice so took anything that was offered her. In 1971, at 17 years old, she shot up heroin and used a “stupid old junkie needle” that someone handed her. Soon after, she became very sick. She felt ill and exhausted and did not have “that teenage energy.” She also experienced abdominal pain, jaundice, and excessive burping that tasted like sulfur. When she went to see the doctor, he told her that she had non-A/non-B hepatitis (there were no tests for hep C at this time) and that “you could die from this.” She was instructed to stay away from alcohol and to be on bed rest for a year. Her reaction? “This was the worst thing to tell a troubled teen. I have to stay in bed and can’t drink? Shit!” The reaction from her parents? Nonexistent. They were “preoccupied with themselves and their marriage.” But Sherri did follow doctors’ orders. She rested and stayed away from alcohol and other drugs for a year. Then, she returned to her “wild child life” and “went on my merry hell-driven way.” But no matter how high or drunk she was, she never quite forgot about the hepatitis. Her liver was always in the back of her mind.

Sherri followed her musical dreams and by 1981 was fronting a pop music band in New York called Get Wet, with “Sherri Beachfront” as her stage name. Fueled by drugs, booze, and a lot of drive, Get Wet signed with Boardwalk Records and their single “Just So Lonely” hit the Billboard charts. But Boardwalk Records went belly up a few years later and the alcohol and other drugs once began to take their toll. Sherri ended up living in a sketchy New York apartment, with bottles, syringes, and vomit as her roommates. To quote VH1, “And then…the music stopped…”

In 1985, after a couple of attempts at rehab, Sherri got clean and sober with help from Narcotics Anonymous and their 12-step program. She got a sponsor and “one day at a time” became one of her many mantras. Once told by a therapist that her addiction was “situational” due to her family history and the incest, Sherri slightly scoffs at this. “It doesn’t matter if it was situational, once you are a pickle, you never get to be a cucumber again.” Once sober and stable, Sherri did begin singing again and booked some dates at hot clubs and almost got a role in an Off-Broadway show.

By 1987, she was newly engaged and ready to become a wife and mother. “I was always meant to be a mother.” She went to the doctor to “get tested for everything.” She wanted a “clean bill of health for her fiancée.” Much to her shock, her HIV test came back positive—on her 33rd birthday no less. “No one forgets their diagnosis date; that one was particularly telling. Really? On my birthday? Gee whizz, thanks…it was clear life or death. I was born on this day, what are you trying to tell me, God? I’m kind of like Tevye (a character from Fiddler on the Roof), I’m always talking to God.” 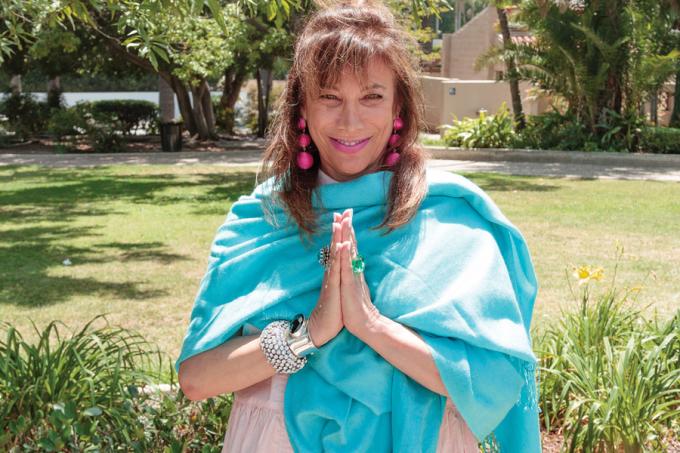 With her T-cells around 700 and no symptoms of HIV, Sherri refused to go on AZT, the only medication at the time. She “wanted to wait until there was something better.” While she was waiting for those better medications, she changed her diet to macrobiotic (fish, grains, legumes) and cut out dairy and wheat (Sherri was gluten- and dairy-free before anyone else was, which is a testament to her hipness). She started an HIV regimen containing a protease inhibitor in 1997. By that point her T-cells had dropped to 225 and she had extreme fatigue and a rash, but she quickly bounced back once she started treatment.

When the hep C antibody test was approved by the FDA in 1992, Sherri was tested shortly thereafter and was officially diagnosed with HCV. She had always mentioned her non-A/non-B diagnosis to her healthcare providers, so this particular diagnosis was not a surprise. And in comparison to testing positive for HIV, “It was so secondary next to the death sentence and dark cloud—the humungous HIV burden. I was already working and counseling in the field…and was seeing people dying. I was trying to sell hope.” It’s not like she wasn’t concerned, but HIV was more of a priority. Besides, Sherri had been clean and sober and macrobiotic since 1985 and living a healthy life, so she was certain that her liver was healthy, despite the virus.

She didn’t want to go on interferon due to the horrible side effects she saw her friends in the injection drug community experiencing (extreme fatigue, fever, chills, major depression) so she decided to do what she did with HIV and wait for something better to come along. She also decided not to get a liver biopsy. “I kept hearing that the tissue was the issue” but she felt fine and closely monitored her hep C viral load (which was never high, which is unusual) and liver enzymes. In 2015, her HIV doctor, Dr. Judy Currier at the UCLA CARE Center, mentioned Harvoni to her and it sounded exactly like what Sherri had been waiting for.

But getting Harvoni turned out to be harder than expected—much harder. Once Sherri “learned how expensive it was, I looked for a clinical trial.” She went to the offices of Dr. Peter Ruane in Los Angeles. Dr. Ruane was running an 8-week clinical trial of Harvoni. At his offices, she received a FibroScan, which checks the levels of liver fibrosis. Much to Sherri’s astonishment, her liver score was F3. She had liver fibrosis. “The doctor came back to me with the sullen face and I was as shocked as I was when I was told I was HIV-positive. I think I’m fine and that I’m getting an ‘A’ and you’re telling me that my liver is not good?” Due to her F-score, she could not join the study. Tests also revealed she had kidney damage, most likely due to taking Truvada for many years, she was told. Stunned and disappointed that she could not join the clinical trial, “I ran back to my doctor with my tail between my legs.”

Due to the kidney damage, Sherri had to switch to Triumeq. Once the switch was official and her HIV labs stabilized, Dr. Currier and Sherri had a major fight ahead of them. Even with an F3 score, she was denied treatment. The rejection letters from the insurance company kept coming, which was particularly galling since Sherri pays a high premium for private health insurance. Dr. Currier finally wrote an appeal, which listed Sherri’s kidney problems as yet another reason to approve the Harvoni prescription. “Dr. Currier had to play the kidney card…and just give me the damn drug.” Finally, Sherri was able to get the medication (it was not yet on California’s ADAP program).

“When it was finally approved, I felt like it should arrive in a Wells Fargo stagecoach with armed guard…like they were smuggling drugs or delivering platinum.” Before taking her first dose, Sherri paused and looked at the big pill and thought, “I can’t believe this…it’s almost unbelievable that you’re gonna be cured after 40 years.” She took her first Harvoni pill along with her Triumeq and started her journey towards the cure. At three weeks, Sherri’s hep C viral load was already undetectable but she did have side effects, including exhaustion and some headaches. The extreme fatigue forced her to take a hiatus from her beloved hot yoga classes and lasted six months post-treatment.

Not thinking constantly about her liver has given Sherri time to focus on her creative side. A popular blogger on TheBody.com and a writer for A&U magazine, Sherri enjoys expressing herself through the written word. But music is still her primary passion. “Sherri Beachfront has come back. She was like in a trunk, she was in a coffin, but now she’s unearthed. She sounds the same, but don’t do a close-up!” Sherri is singing again and her new single, “Turn Up the Radio,” is now available on iTunes and CDBaby. And more music from Sherri Beachfront to follow!

Says Sherri, “What it took to stay here, I would do it again. My life is richer from the journey.”

Michelle Simek works at an HIV/AIDS research and treatment clinic in Los Angeles, California. She is also an actor, freelance writer, and literary editor. In her spare time, she knits, goes to punk rock shows, and pets her cat, Baxter.