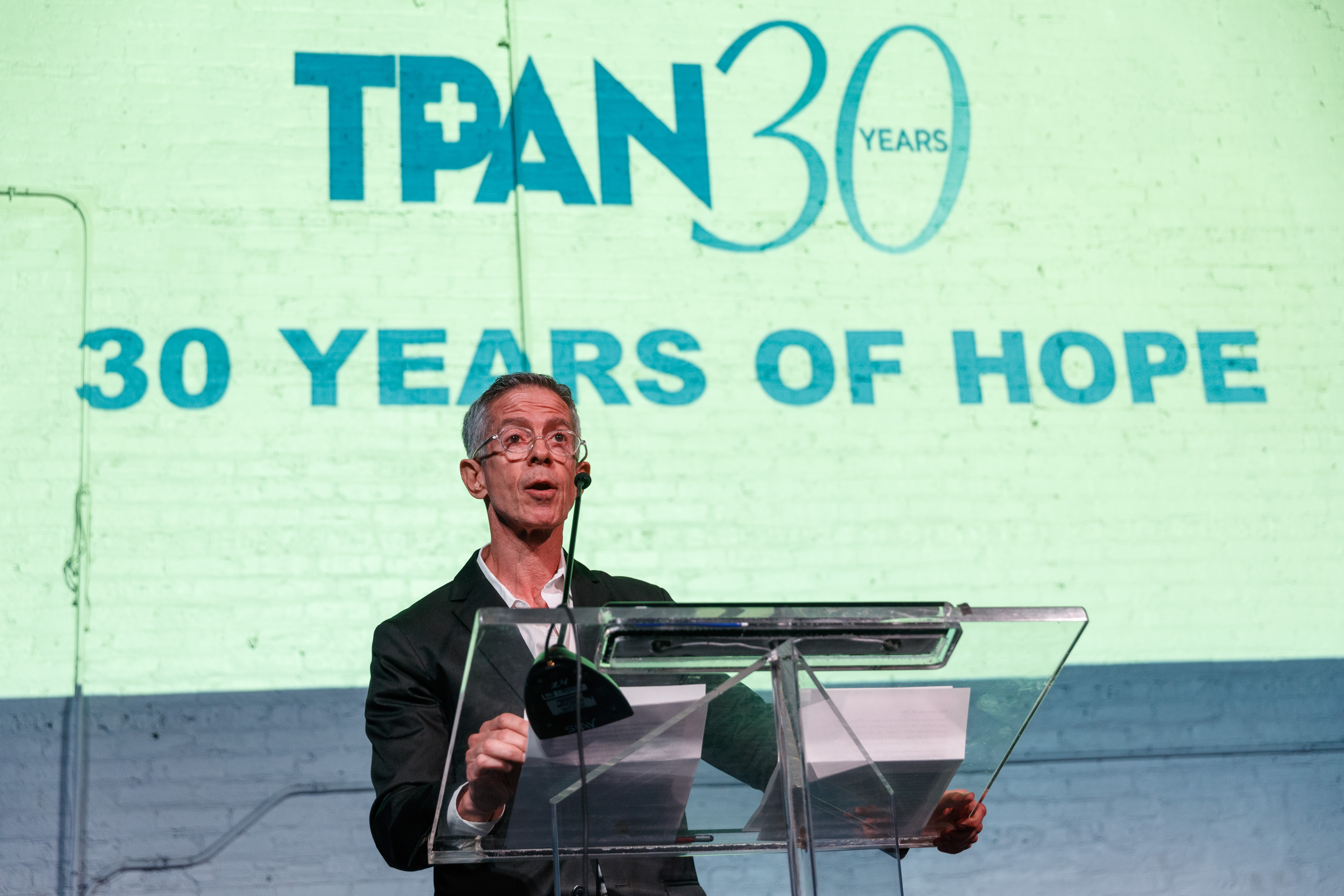 Thanks to Jeff Berry for reaching out to me to be a part of this event marking TPAN’s record of service people living with HIV for 30 years. Very few of the many AIDS groups formed in the 80’s have gone the distance and remained in the fight, determined to see their missions fulfilled until the day there’s a cure.

I’ve been to a few of these events of late, and they rightly honor the founder or co-founders to mark the occasion, and this is a good time to honor the vision of early AIDS activists like Chris Clason. But we rarely honor the folks that came after the founders. Many others did extraordinary work to keep TPAN’s doors open these many years, including board members, executive directors, an expanding staff, and countless volunteers and donors. It took visionaries after the early founders to expand TPAN’s services to meet the needs of a far more diverse client base than the mostly gay white men who first filled the support groups of the late 80’s. It took leaders like Matt Sharp and Jeff Berry to launch unique programs like The Reunion Project that enriches the lives of long-term survivors.

Tonight, we also honor all those who came after the founders for their dedication and their activism in the fight against AIDS.

32 years ago, in 1985, I was diagnosed with AIDS-Related Complex while working on Wall Street, trading U.S. government bonds for JP Morgan. I was only 24, and deeply closeted. Rock Hudson had recently died from AIDS, and the country was in the midst of an Ebola-like panic about this not-so-new epidemic which had gone largely ignored by our government and most Americans since the first cases in 1981. There were no treatments yet, and the press was saying the death rate was near 100%.

Like Chris, my first impulse was to find and devour any and all information I could about how to live a little bit longer with this disease. Within a few hours of getting the diagnosis, I was scouring a newsstand for any articles on AIDS in the science magazines. To my amazement, Discover magazine had a huge cover story that month titled “Special Report: AIDS, the Latest Scientific Facts.”

Of course, the article got the big stuff very wrong indeed. AIDS became one of the biggest plagues in human history with 35 million deaths thus far. And approximately 90% of those deaths were heterosexual men and women.\

Thankfully, the article got a lot of the small stuff right. It provided a detailed and comprehensive explanation of the HIV life cycle, and how the virus destroyed the immune system. Within hours of my diagnosis, I was learning about T-cells, and retroviruses, and reverse transcriptase, which allows HIV’s RNA to genetically merge with a T-cell’s DNA, turning it into a factory for more HIV before killing off this important immune cell.

After reading the article, I had a good cry. With its genetic integration, there wasn’t going to be an easy way to get this virus out of my body. I probably wasn’t going to live long enough to see a cure.

But maybe I could buy myself an extra year or two. I went home for Thanksgiving one week later and started the process of creating a support network, telling my family the news, one at a time.

There was a great AIDS joke back then which resonated with my experience. The earliest reported cases of AIDS happened in the three H’s—homosexuals, hemophiliacs, and Haitian immigrants. Guys like me had two huge challenges when breaking the news to our parents: telling them you had AIDS, and convincing them that you were Haitian.

I was one of the lucky ones. My family rallied behind me. I kept trying to learn everything I could about HIV/AIDS. What was being researched? What was our government doing? And most importantly, I had to make up for lost time in learning about and connecting to my community, the LGBT community, and all it was doing to fight the plague and indifference that were brutalizing us daily. I learned about GMHC, then the People With AIDS Coalition, then a small group of radical activists called the Lavender Hill Mob.

My early diagnosis turned out to be a gift because I got to witness the beginnings of the greatest movement in LGBT history, the birth of ACT UP. Its first demonstration was on Wall Street, on March 24th, 1987, and a young activist handed me a flyer on my way to work before the demo started. I showed up at their next weekly meeting, and never looked back.

I’ve never had more life pumped into me in such a short time. The first meeting I went to had mover a hundred people, filled with a sense of unity and purpose, and seemingly no doubts that they were already making history. And it just kept growing from there. 300 by June. 600 by the end of that first year. 1,000 a week by the end of the following year.

ACT UP became my religion. I had never felt that level of comradery, of community. Each and every week, it was a heady mix of selflessness, anger, empathy, passion, love, youth, power, sexiness, laughter, and tears. We got arrested together. We sang show tunes from our holding cells. We watched ourselves on the nightly news, speaking truth to power.

We were a family, in the truest sense of the word, albeit a very large family that engaged in lots of incest. We forget in this age of sex shaming and PrEP debates that ACT UP was one of the most sex-positive movements in American history. We used reason to suppress fear and refused to let a virus divide us.

Some of you may have seen the documentary “How To Survive A Plague,” which tells the story of ACT UP’s treatment activists from 1987 up until the first protease inhibitors were combined with older drugs in 1996, and we finally discovered a way to tame the virus. The documentary explains how we became our own experts, allowing us to push the scientists in government and the pharmaceutical industry to find the treatments that would save our lives.

But this was only part of the story. By focusing on the smaller group of treatment activists, audiences may have missed the larger impact of the entire community’s response in those first few years of ACT UP, of how we changed hearts and minds to force a national response to the crisis.

There is a fascinating national poll that Gallup has been running since 1977 that measures homophobia in America. Gallup started asking Americans a now arcane-sounding question every year or year and a half starting in 1977 up until just this past May, so it’s the longest dataset we have that looks at how homophobic we’ve been over the last 40 years.

The question they’ve been asking is, “Do you think gay or lesbian relations between consenting adults should or should not be legal?” It’s basically a question about sodomy laws, but even today, almost 25% of Americans say gay sex should be illegal.

When they first asked this question near the end of the sexually-liberated 60’s and 70’s, the country was equally divided with their answers. 43% said gay sex should be legal, and 43% said it should be illegal, with the remainder having no opinion. But then AIDS hit, and a backlash started. The illegal percentage started to rise in 1982. By 1988, 57% of Americans wanted to lock us up. Only 35% thought we should be left alone.

But then something amazing happened. The next time Gallup asked the question 15 months later in late 1989, the illegal percentage crashed by 21 points, and the legal and illegal stats switched. Only 36% said illegal, and almost half the country said gay sex should be legal.

This wasn’t some fluke data point. These two stats stabilized there for the next five years, until the Don’t Ask Don’t Tell debate emerged, and the illegal percentage started rising again. But from that point on, it never broke 50%. Today it stands at 23%.

What caused that huge drop in homophobia between mid-1988 and late 1989? Starting with ACT UP’s huge national demonstration at the FDA in the fall of ’88, demonstrations of AIDS activists became the protest movement of its day. Americans, for the first time, saw large numbers of gay men and lesbians united in anger, putting their bodies on the line, fighting to be recognized. We shattered the American myth of the homosexual as weak, cowering in the shadows, too afraid to stand up for himself. A sympathetic press took those images of hundreds of us, angry, determined, and organized, and started running stories about the totality of our community, as it came together to take care of its sick and dying, forming and self-funding our own organizations so that no one would die alone.

America finally witnessed our humanity, seeing us as a shining example of family, community, and love. Polling quickly showed that the vast majority of Americans wanted their government to respond to the AIDS crisis. Federal dollars started to flow. Between 1987 and 1990, the AIDS research budget at the NIH tripled, topping $1 billion a year, and kept rising from there. We now spend $3 billion a year on AIDS research.

The treatment activists did amazing work greasing the wheels of that research, but those tax dollars are what made it all possible. That huge national investment in research is the reason I’m alive today. People power did that. Putting our bodies in the street did that.

And now that the world seems even darker than the plague years, and the obstacles are certainly a magnitude greater, it will be people power and love that push back with more effect than any politician or any well-spoken activist. Instead of bodies in the street, it will be the pussy-hat knitting parties in rural Pennsylvania, and the birddogging trainings in Maine, and the Indivisible chapters in Texas, that end up taking country back starting with next year’s midterm elections.

And just as ACT UP was constantly underestimated, so too is The Resistance. This movement is more broadly supported than any movement in our nation’s history. I think it’s a pretty glorious time to be an activist again. As the plague years showed us, activism is about plowing through pessimism. So we are fighting back again, pushing back against hate, against Trumpism, and determined to write the final chapter of the AIDS crisis. We will never give up until a cure and a vaccine are found. We will never let the memories of those we lost fade away before the work they started is complete. We will continue to fight in their name.

Make no mistake. History is being written again, and we will be part of it.