A night in honor of hope and community

Founders and friends gather together in unity and celebration

Oh, what a night.

It was 30 years ago on June 19, 1987 that a group of gay men joined Chris Clason in his living room to found Test Positive Aware Network (TPAN), an HIV service organization, and the publisher of POSITIVELY AWARE.

Chris had searched for support following his HIV diagnosis and told there was none unless he had AIDS. Together the men formed a group in which they would support one another: with information, with compassion, with laughter.

Thirty years. On September 28, TPAN celebrated its survival and three decades of service. Early founders and “angels” spoke and received awards for their “Legacy of Devotion.”

“Tonight, we also honor all those who came after the founders for their dedication and their activism in the fight against AIDS,” said activist Peter Staley, a founder of ACT UP (AIDS Coalition to Unleash Power), also formed in 1987, a thousand miles away in New York City. ACT UP/Chicago started a year later. Early TPAN member Bill McMillian was a part of that ACT UP group. He had never met Staley—but had been arrested with him. They finally spoke together on this night.

Founding member Bill Rydwels said, “We started with 19 people and we ended up within two months with over 200 people.” Like the other members, his doctor told him he had 18 to 24 months to live.

Other doctors refused to accept that. Daniel S. Berger, MD, Medical Director of NorthStar Medical Center in Chicago, spoke about being a clinician just out of medical school and pushing the boundaries in search of anything that would help his patients survive—nutritional support, psychologists for emotional support, creating clinical trials looking at potential new remedies, advocating that the voice of patients be included in their care.

Dr. Neel French, who received a legacy award for his early involvement with TPAN, also spoke about those often horrifying early days and what TPAN meant for patients. Doctors were a frequent part of TPAN’s meetings, answering questions to the best of current knowledge. Sometimes, they had to go past what was known to examine the cutting edge, before it became established practice. Members also brought back information not yet widely known.

Board members and support group members spoke briefly but powerfully about the importance of TPAN’s support. One broke down and cried.

In his brief comments, Dr. Berger said, “Who would have predicted that we’d be here 30 years later for a celebration?”

Later he said, “During the event, it was really special to run into people who traveled back to Chicago for the evening, some of whom I haven’t seen in years. There were many moments seeing tears in people’s eyes.”

But, he said, it’s also important to “celebrate our achievements and be joyous about our success.”

As music pumped up the energy—DJ Marc “Moose” Moder played a list of songs from 1987—Denise Ward videotaped the members of her women’s support group dancing together, saying, “This is my family!” Event volunteer Bruno Mondello, now a chef, said, “I was part of TPAN 20s [a support group]. Now I’m in my 40s.” (He’s 49.) A patient at NorthStar, Mondello said, “Dr. Berger saved my life—over and over.”

Carol Mendelson, co-founder of Family AIDS Support Network (FASN), which operated through TPAN, was able to attend, joined by her husband, Ken. The Mendelsons lost their son, artist Steven (Steve), in 1995. FASN has an unpublished manuscript with dozens of stories from families who lost a loved one. Co-founder Betty Stern’s story about her son Robert was published in the July 2003 issue of POSITIVELY AWARE. Said Bernie Brommel, “How many hundreds or thousands did these two mothers with dying sons help?”

Unable to attend the celebration were members of Chris Clason’s family, whose support has never wavered. Chris died on December 26, 1991, at the age of 38.

Three years ago, for POSITIVELY AWARE’s 25th anniversary, niece Jill Stover Martinez said, “We are over-the-top proud of him.”

Sadly, her mom, Chris’s sister Phyllis Stover, the oldest of his siblings and his close confidant, passed away earlier this year. Back in 2014, Phyllis told POSITIVELY AWARE, “At that time there wasn’t much information about AIDS or what you could do about it. He got information wherever he could. He had people over to his living room and it grew from there. Heterosexual couples came to his apartment because one or both were infected and there was just no place to go for information. It truly was a calling, but it was necessary, too, for himself and for everyone he knew who was in the same situation. Maybe it was just a little match flicker, but it was better than total darkness. Wouldn’t he be amazed at the computer revolution?”

TPAN CEO Patti Capouch told the audience that just earlier that day, the agency received a call from a young man who had moved away to a small town in the South and missed the agency’s support and education. He talked about the lifesaving effect it had on him, and how he and his new—and HIV-negative—partner planned to move back to Chicago. The crushing stigma, she reminded everyone, is far from over.

“A lot of work remains in the post-PrEP era,” said Dr. Berger, “bridging the gap to those who still don’t have access to treatment, education, and support, the censorship and prejudice we still endure, and the long-term effects HIV is having on aging.”

Founding member Bernie Brommel talked about supporting early members, many rejected by their families, and about the “angels” who joined the group in support through their grief. He read a note from Oprah Winfrey, who was unable to attend. Her second employee after she arrived in Chicago, her right-hand man, was Bill Rizzo, the first board president of TPAN. She rushed to his hospital bedside during every major illness.

“Bill Rizzo was a founding member of TPA, just as he was a beloved member of my original team,” Oprah Winfrey wrote. “Rizzo brought to TPA the same spirit and mission as he did for the Oprah Show—bringing hope amid despair, advocating truth against rumors, promoting education in the face of ignorance, inspiring courage and compassion in place of fear.

“A dark shadow fell over the late ’80s, and TPA was one of the first guiding lights. At a time when doctors, airlines, restaurants, and even families of young men who tested positive were closing their doors, TPA opened their doors and their arms. When so many said, ‘Go away,’ TPA said ‘Come on in.’ Today, the world now sees HIV and AIDS more clearly all due to the courage of individuals such as Bill Rizzo and groups such as TPA who turned a light on for us all in 1987.” 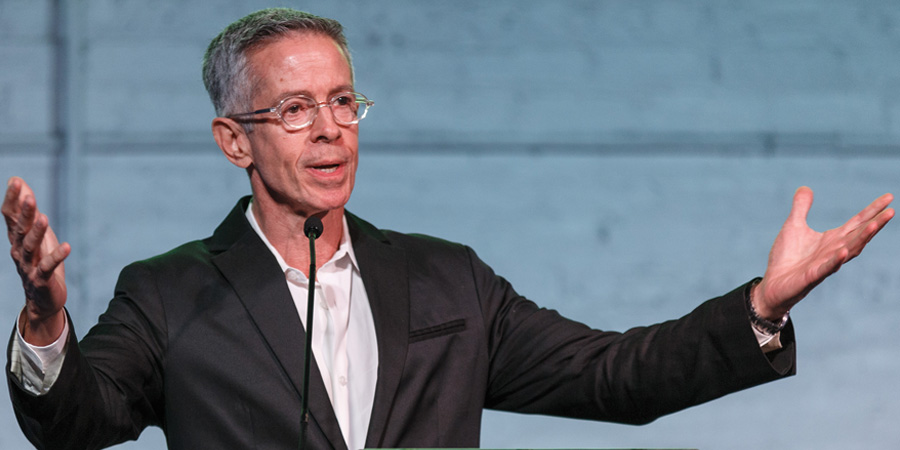 In his comments, Peter Staley said, “As the plague years showed us, activism is about plowing through pessimism. So we are fighting back again, pushing back against hate, against Trumpism, and determined to write the final chapter of the AIDS crisis. We will never give up until a cure and a vaccine are found. We will never let the memories of those we lost fade away before the work they started is complete. We will continue to fight in their name.

“Make no mistake. History is being written again, and we will be part of it.”

“It’s very important to me that TPA exists and I’m very secure in the fact that it will continue to exist. TPA just happened to be the right seed in the right earth at the right time to take off and grow. It was a matter of timing, of developing awareness and creating something that served a lot of people and that continues to serve a lot of people. It will not be the same for generations after us. The situation is not going to be the same for people tomorrow that it was two years ago. It will be better and it will be worse. Just try to maintain the flexibility to handle whatever is coming up. I think death and dying is an important issue, but I think health and living is a very important issue; both deserve equal focus, if not a little extra on health and living issues.”