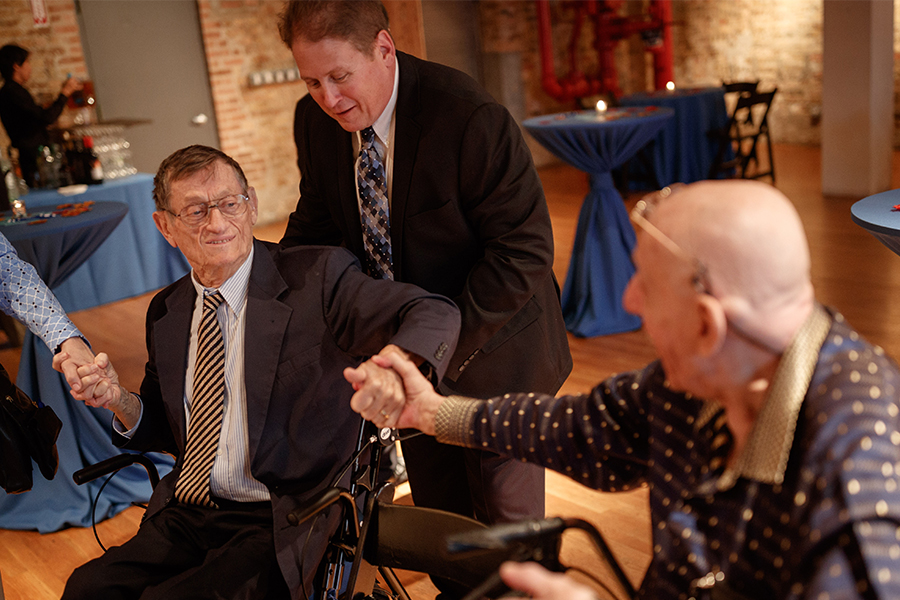 This remembering of TPA after 30 years has put me into the equivalent of Post-Traumatic Stress Syndrome. I broke down the other day on dialysis and couldn’t stop sobbing, because of the memories of the thousands who died and who came into TPA. It has caused flashbacks and my inability to sleep. I toss; I turn; I see the faces of Anthony, Frank, Jim, Rizzo. Thousands of them. When we started, the first 16, 20 of us, we did launch something that helped with the pain of these kids whose families disowned them, who had no place to go to sort out their dying. Flashbacks. I see Carlos, a former student of mine at Northeastern Illinois University, trying to hang on to life. A Chicago school principal, with his wonderful partner, Tony, at his bedside. I see Tim Sullivan, beloved partner of Charlie Morris, who is here tonight, one of our original board members. I see one of those faceless kids crying: “I don’t want to die. I’m too young! How many days or weeks do you think I have?”

I used to get up at night because I lived within walking distance of Illinois Masonic and St. Joseph’s. Then I’d just go up and down the halls in either hospital of kids who had no one, thrashing around in their beds, covered with Kaposi’s Sarcoma, or with parched throats and cracked lips, beautiful bodies completely wasted away. AIDS here in Chicago was Auschwitz. It was terrible. And I am haunted by those faces with sunken eyes. Yes, I saw some of you in those rooms. I saw Hannah Hedrick; I saw Lori Cannon at the side of her beloved friend Danny Sotomayor; I saw Lisa there for her friend Patrick.

Tonight I want to single out first my children, if you wondered what Dad was doing. I had custody every other weekend; I never missed it. But in between I did intake interviews every Wednesday and Friday at TPA. If you think your Dad was out partying and disco dancing, no. Some of you asked me, “Did you have a good time last night?” I always said yes. You didn’t know until this moment what I did with my time. Thanks, kids, for sharing me with TPA.

Out of TPA we created the Damien Ministry, which needs to be honored tonight, because from TPA we needed a hospice support group. Four of us, Father Mike Shanahan, Liz Wilson, Sister Anita, all brilliant compassionate caregivers, and I followed the AIDS model of the Damien Ministry in Washington, D.C. We did three, four retreats a year. We’d get a retreat house at some convent or monastery in different areas of Chicago. Some religious orders were so good to us; others feared to host us. One of the ones we used often was The Villa Redeemer up in Deerfield with Father Fred Hang presiding. We’d have 30, 40, whatever the retreat house would hold. Most that attended didn’t have the money for the fee. But we took them in anyway. I publicly call out and thank the co-leaders of the Damien Ministry. I don’t remember a single one of the people that went to those retreats that wasn’t also a member of TPA. Two other priests that stand out are Father Ed Harasim, who was director of AGLO (Archdiocesan Gay and Lesbian Outreach), and Father Greg Jones. How many funerals did they conduct?

Another special kind of ministry was really Hannah Hedrick, Lisa Congleton, and Mary Pat Brown. When my beloved partner Randy, whom I met in TPA, was dying, sometimes late at night Hannah came, pedaling on her bicycle, wet and soaked. She talked to Randy, and he’d calm down. She did this for so many people. And at all TPA meetings there was Lisa and Mary Pat, to give us massages and hug us. These were the people that were on the front lines, caring for those sick and dying of AIDS. Incidentally, I lost Randy, but my present partner Carl came to a TPA meeting and it turned out that he had a false positive diagnosis. He heard me conduct a meeting in which I had invited one of my sons, Brent, to share his feelings about finding out his dad’s status. Years later Carl and I met again at a square dance.

Another spin-off group that came out of TPA was a family/friends support group created by Carol Mendelson and Betty Stern, two women who had lost their sons to AIDS. They came and asked the TPA Board for space on Wednesday nights. How many hundreds or thousands did these two mothers with dying sons help?

Next I would like to honor my fellow board members. There are three of us who are alive and here tonight. Another, Michael Blackwell, was not able to join us. Thanks, Charlie. Thanks, Bill. You were wonderful board members. And so were many others, now dead. Our first board president, Bill Rizzo, one of the most charismatic, physically and spiritually beautiful people I have known. Rizzo was our first board president, followed by Charlie. They saved the organization again and again. He and Hannah guaranteed to pay the rent, or we couldn’t find the space. And I kept covering checks so that they wouldn’t bounce.

I had a student, Alice McGee, from Northeastern, who got an internship with Oprah. She was Oprah’s first employee and earned $12,000 the first year, a dollar a letter for answering the 12,000 fan club letters. And Bill Rizzo was Oprah’s second employee. And she and Rizzo decided to create a brand, an image of Oprah. Alice created a fan club. And Bill dressed Oprah, among many other duties.  Any time Bill had a health crisis, Alice and Oprah would jump in a cab and rush to his hospital bedside. This led to Oprah’s doing some of the first shows on television about AIDS. Alice could not be with us tonight. She was planning to come but a friend of hers is dying, and Alice is with him in the Mayo clinic. Alice and I worked on trying to get Oprah to come, and until recently it looked like she might be able to fit it into her schedule.

Here is a letter from Oprah, and it is an appropriate way to close. Oprah writes:

Bill Rizzo was a founding member of TPA, just as he was a beloved member of my original team.  Rizzo brought to TPA the same spirit and mission as he did for the Oprah Show---bringing hope amid despair, advocating truth against rumors, promoting education in the face of ignorance, inspiring courage and compassion in place of fear.

A dark shadow fell over the late 80s, and TPA was one of the first guiding lights. At a time when doctors, airlines, restaurants and even families of young men who tested positive were closing their doors, TPA opened their doors and their arms. When so many said, ‘Go Away’, TPA said ‘Come on in.’  Today, the world now sees HIV and AIDS more clearly all due to the courage of individuals such as Bill Rizzo and groups such as TPA who turned a light on for us all in 1987.