A matter of justice

For people living with HIV, the COVID-19 pandemic has been especially stressful—from the uncertainty of whether HIV makes them more vulnerable to this new virus or prone to worse outcomes, to exposing them to stark social and health inequities. And with the development of COVID-19 vaccines have come more questions, arising from misinformation in social media and historical medical mistrust, especially in communities of color. To address these fears and questions, Positively Aware organized a virtual webinar in March that brought together researchers and community advocates.

A Matter of Justice: COVID-19 Vaccines and Health Inequities in People Living with HIV featured Richard Jefferys, the director of Treatment Action Group’s (TAG) Basic Science, Vaccines and Cure Project; Stephaun E. Wallace, PhD, MS, director of external relations at the HIV Vaccine Trials Network and the COVID-19 Prevention Network, and clinical assistant professor of global health at the University of Washington; Christopher Hucks-Ortiz, MPH, director of HIV and clinical services at Black AIDS Institute; and Gina Marie Brown, a community advocate who sits on the boards of the Black AIDS Institute and Sister Song, and is a member of The Well Project’s Community Advisory Board.

“From the studies that have been done to date, it does look like [having] HIV...is associated with a somewhat increased risk of more severe COVID-19 outcomes,” said Jefferys. “It’s not a huge increase, and just something to be conscious of, not panic about.” 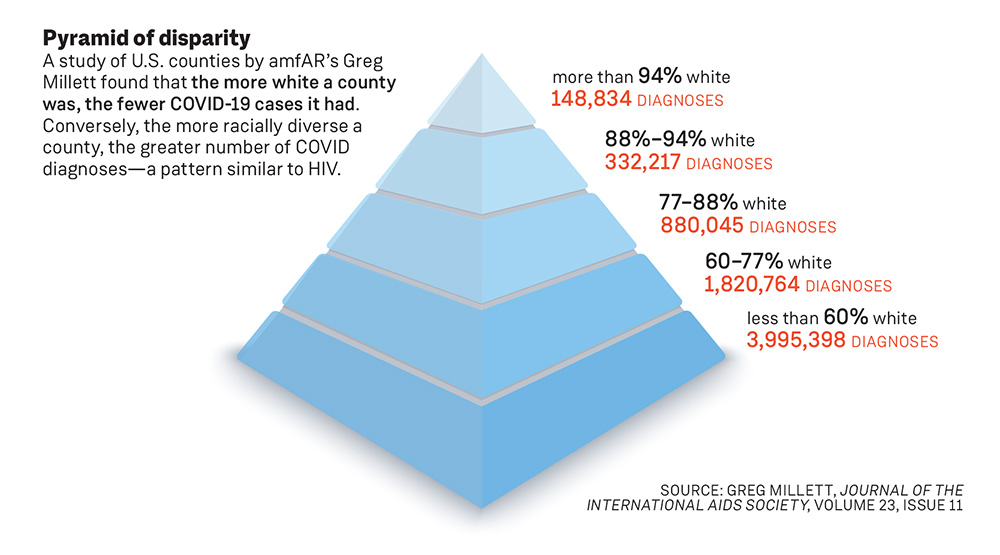 It is uncertain to what extent HIV by itself plays a role, he added, but a lower CD4 count might be significant. “It seems that having a lower CD4 count is a key factor where there’s an increased risk of worse outcomes or mortality for people, particularly if they have less than 350 CD4 T cells.”

Risk factors backed by mixed or limited evidence include:

Older adults make up the largest group of COVID-19 cases—and with the worst outcomes. Roughly 40% of the general population was over age 45, according to 2020 U.S. Census Bureau estimates, and more than half of people living with HIV in the U.S. are over age 50. People aging with HIV are more likely to have multiple comorbidities or co-existing conditions and illnesses, which often increase as they get older.

The discussion transitioned to social determinants—and how racial, social, and economic forces, both institutional and systemic disparities, drive the pandemic for people of color who are living with HIV.

Stephaun Wallace pointed to a study by Greg Millett, vice president and director of public policy at amfAR, which compared the racial diversity of counties in the U.S. against the numbers of COVID cases.

‘We can’t leave it up to the same folks who designed this system to design the new system. We’ll find ourselves back in the same place.’

“The number of diagnoses is so much higher in the counties where they’re less than 60% white,” Wallace said. “In a separate paper, he’s shown exactly the same pattern for HIV diagnoses. And he created this kind of image to show what the parallels are...there [are] all these pathways through structural racism that contribute to this overlap between SARS-CoV-2 and COVID-19 and HIV.”

People of color are over-represented in what have come to be called essential services industries—from retail inventory employees to hospital workers—with little ability to limit their increased public contact and greater potential exposure to COVID-19, said Dr. Wallace. Moreover, they are more likely to be in low-wage jobs that don’t provide health insurance, paid sick leave, or the opportunity to work from home.

Citing results from a 2017–2018 survey by the U.S. Bureau of Labor Statistics, Dr. Wallace pointed out that 30% of white employees said they could work from home, while 20% of Black workers, and only 16% of Hispanics said they could.

People of color also tend to live in higher-density housing and in intergenerational home environments, increasing the risk of and vulnerability to COVID exposure.

These social disparities can turn into structural determinants when government funding—and public policy—are determined by data that fail to take into account, or offer only incomplete information about, race and ethnicity.

“There was a report produced by the Urban Indian Health Institute that graded the states on how well they’re collecting race and ethnicity data that I think is absolutely important to read,” Wallace said.

“What we’re really talking about here are systems and how all of these systems sort of work or play together,” he said. “Many of these systems are not just contemporary, they have historical standings and originations, and they continue to exist and permeate our communities now, and these things continue to work in opposition to healthcare.”

Asked how to address missing demographic data in health and governmental systems, Wallace saw a role for activists.

“Allocation is left up to states to determine how they prioritize populations,” he said. “These are opportunities to think about leading with an equity lens—that we don’t just think about race and ethnicity, we also overlay that with older adults. And we also overlay that with other groups that are experiencing underlying health conditions that would place them at an increased risk. It would be really important for health departments that are thinking about this to think about this really critically. I would invite them to ensure that HIV advocates are part of the conversation, you know, when they’re thinking about what their plans are, how they want to modify or update their plans to respond to the concerns regarding allocation.”

However, any discussion of public health systems must address medical mistrust, particularly within the Black community. Most often cited is the infamous “Tuskegee experiment,” conducted by the U.S. Public Health System and the Centers for Disease Control and Prevention from 1932 to 1972, which studied 600 poor Black Alabama sharecroppers, 399 of whom had syphilis which doctors intentionally left untreated to observe its effects. The unintended, but inevitable, consequence of Tuskegee and many other instances of harm inflicted upon people of color was an ingrained distrust of the medical profession. There are other examples of institutional harm, such as the forced sterilization of poor women of color without their knowledge, but added to this legacy are the individual encounters of racism and dismissal that Black and Brown people have experienced at the hands of their own care providers.

Moved by Gina Brown’s experience (see side bar below), Christopher Hucks-Ortiz offered another dramatic example. Susan Moore was a Black physician who developed COVID-19, documented her doctor’s dismissal of her pain and symptoms, and later died.

“She documented her experiences of not being listened to, because she put on a [hospital] gown and got into the role of being a patient—that’s something we need to talk about in public health, is how people get dismissed when you are in the role of a patient, even if you’re a competent medical professional,” he said. “Even if I’m not a physician, I’m an expert in this [pointing to himself with both hands]. And I need you to listen to me when I say, there’s something that doesn’t feel right, or, I have some concerns.”

Dr. Wallace offered his own perspective, and a call to action.

“What was really egregious is not just that she died, and that she was a physician,” he said. “She’s another example of a Black woman who wasn’t believed. It was the hospital’s response to her death—that’s what was so egregious. They basically painted her as a problem patient, and this is exactly the kind of thing that happens to Black people when we go into healthcare spaces. When I think about how we need to change the healthcare system, we need to dig deep. As we’re digging deep and doing the work to transform systems, we also simultaneously need to envision what this new system is going to be. We can’t leave it up to the same folks who designed this system to design the new system. We’ll find ourselves back in the same place.”

Greg Millett’s report, New pathogen, same disparities: why COVID‐19 and HIV remain prevalent in U.S. communities of color and implications for ending the HIV epidemic, was published October 2020 in the Journal of the International AIDS Society. Read it at onlinelibrary.wiley.com/doi/full/10.1002/jia2.25639.

The Urban Indian Health Institute’s report, Data Genocide of American Indians and Alaska Natives in COVID-19 Data, is at bit.ly/datagenocidereport.

Moderated by Positively Aware editor-in-chief Jeff Berry, A Matter of Justice: COVID-19 Vaccines and Health Inequities in People Living with HIV was held March 4 via Zoom. This webinar was made possible with support from Janssen Pharmaceuticals. Watch the program at positivelyaware.com/justice. 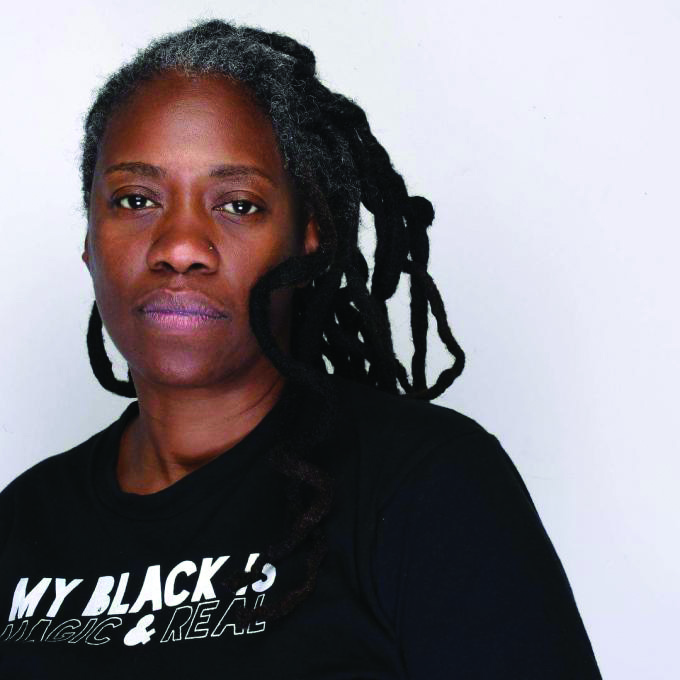 ‘My daughter would have been 36 this year’

“Tuskegee was however many years ago, but it still happens today,” activist Gina Brown said. “I can go to a doctor, and I can tell my doctor what’s hurting. My doctor will insist on telling me what they think is hurting me, or they’ll switch my words around and say what they think they hear. Medical professionals have to learn to listen to us. It’s not that my grandmother had a bad experience, it’s that I had a bad experience.”

That bad experience has included how her doctor has talked to her—or what the doctor didn’t tell her.

“I never heard about U=U [undetectable equals untransmittable, how HIV cannot be sexually transmitted if someone is on successful antiretroviral treatment and has undetectable viral load] until Bruce Richman [founder and executive director of the Prevention Access Campaign, that raises awareness of U=U],” she said. “I have two degrees, I’ve been living with HIV a long time, and my doctor never thought it was important to talk to me about that. That’s what needs to change.”

Brown shared with the virtual audience how racism and disregard of Black women in need of health care profoundly altered her life.

“I had a daughter who would’ve been 36 this year,” she said. “I was in labor prematurely, and I went to the doctor and told him what I was feeling. And they sent me home. They didn’t listen to anything I said. Women are dying today, Black women are dying because when they are in labor, doctors are not listening. They’re not hearing us. What should happen is that in medical school, they should be given these tools to really hear.”  —Rick Guasco