The London Patient: A second case of sustained HIV remission

Of the many HIV cure research-related highlights from CROI this year, perhaps one of the most significant was the announcement of a second case of sustained HIV remission following a stem cell transplant similar to the one received by Timothy Ray Brown, the “Berlin Patient,” in 2007. 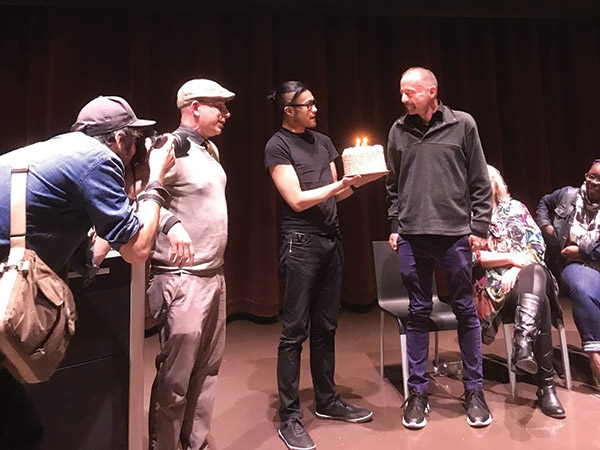 At this time, scientists are cautious with the terminology used to describe the case. It is too early to determine if the London Patient has been “cured” of HIV by clinical standards. His case shows that HIV remission may be possible with a less aggressive approach than the one received by Timothy. However, this cure strategy would only be suitable for people living with HIV who also have a concomitant very serious cancer.

Ravindra K Gupta, from the University College London, described the case of the so-called “London Patient,” who was diagnosed with HIV in 2003. Ten years later, the patient developed Stage IVb Hodgkin lymphoma, a cancer of the lymphatic system. The patient received an allogeneic stem cell transplantation from a donor who was homozygous for the CCR5 gene deletion. Individuals with this gene have a natural resistance to HIV infection.

The London Patient has now gone 18 months off ART (antiretroviral therapy) without resurgence of HIV. No detectable virus was found in his blood using a very sensitive assay, called the QVOA (Quantitative Viral Outgrowth Assay). Of note, the London Patient has also been in remission for his lymphoma since December 2017. Watch a webcast of the presentation at: bit.ly/CROInews1.

The study was led by the IciStem consortium, and supported by amfAR, the Foundation for AIDS Research.

Another case, referred to as the “Düsseldorf Patient,” who received a similar transplant and has been off ART for four months, was also described during a poster session. bit.ly/CROInews2

POZ magazine: A 2nd Man’s HIV is in Long-Term Remission, but Is he Cured? poz.com/article/2nd-mans-hiv-longterm-remission-cured

New York Times: HIV is Reported Cured in a Second Patient, A Milestone in the Global AIDS Epidemic nytimes.com/2019/03/04/health/aids-cure-london-patient.html?smid=nytcore-ios-share

Liz Barr presented a “Landscape Analysis of HIV Cure-Related Trials,” conducted by the Treatment Action Group (TAG). TAG reported 129 HIV cure-related studies by the end of 2018. Most HIV cure-related studies were conducted in the U.S. and France; 32 of them were found to have an analytical treatment interruption. Based on the small sample of survey respondents who were able to provide information about participants’ sex, it appears that the overwhelming majority of participants in HIV cure trials are male (73% male and 27% female) and many HIV cure studies only recruited males. Most common community concerns related to analytical treatment interruptions and HIV drug resistance. TAG is advocating for better completion of clinical trial information found on clinicaltrials.gov, for greater equity in HIV cure research recruitment (with respect to sex/gender and race/ethnicity), and for meaningful community and patient engagement in study design.

Michael Louella, defeatHIV Community Advisory Board, and Karine Dubé, UNC Gillings School of Global Public Health, discussed ethical issues in cell and gene therapy research, following the use of CRISPR-Cas9 technology to edit genes for the HIV co-receptor CCR5 in human embryos in China. He Jiankui made a public announcement of his questionable research in November 2018, generating an international public outcry on the use of germline editing. The risk-to-benefit ratio was unfavorable for this experiment advertised as an ”AIDS Vaccine Development Project.” Louella and Dubé provided an overview of the many ethical issues that gene therapy research raises and called for community education and engagement as gene therapy research is implemented. They reported that the FDA is strengthening regulations around cell and gene therapies, and that the World Health Organization (WHO) also formed a committee to guide editing of human genes globally. A lively discussion of the issues sparked by this case raised more questions for the attendees to contemplate.

Josh Schiffer provided an overview of anti-proliferative therapy for decreasing the HIV reservoir. Cellular proliferation—or the increase in the number of cells as a result of the natural processes of cell growth and cell division—has been linked to the persistence of HIV in the body while on ART. Dr. Schiffer and his colleagues believe that continuous, modest reductions in latent cell proliferation would deplete the latent reservoir more rapidly than current kick-and-kill strategies. He explained that this anti-proliferative strategy requires less potency than latency-reversing agents. One anti-proliferative compound being investigated is called mycophenolate mofetil (MMF), which specifically targets B and T cell lymphocytes. MMF may be teratogenic, meaning it can be harmful to a fetus, currently limiting the ability of testing the drug in women of child-bearing potential. A clinical trial is under way at Harborview Medical Center. The investigational drug has been well tolerated so far in four study participants.

Carl Dieffenbach, of NIAID (National Institute of Allergy and Infectious Diseases), provided a primer on HIV cure research. Dr. Dieffenbach described the importance of having accurate measurements of the HIV reservoir and shared his hope for a new test developed by the Siliciano laboratory that can accurately capture the number of intact and defective proviruses. If correct in his assessment, this new test may prove as important to the effort to cure HIV as the viral load tests were to our ability to begin to curb the epidemic. Dr. Dieffenbach explained various pathways being investigated towards ART-free HIV remission, including stem cell transplantations (for people living with HIV who have concomitant cancer), cell and gene therapy, therapeutic vaccines, broadly-neutralizing antibodies, and latency-reversing agents. Dr. Dieffenbach’s key message was that hints of success are starting to appear in the HIV cure research field.

Deborah Persaud, Johns Hopkins School of Medicine, provided an update on pediatric HIV cure research. Globally, there are 180,000 new HIV diagnoses among children, and only 52% of them have access to ART. Dr. Persaud explained that we still need to pay attention to perinatal HIV infection in the U.S. The Mississippi baby (2013) is the most famous case of ART-free HIV remission in an infant, but Dr. Persaud also described other less well-known cases of post-treatment control in children and adolescents. She also reviewed two major ongoing pediatric HIV cure trials, including IMPAACT P-1115 (very early intensive treatment) and IMPACT-P-2008 (monoclonal antibody VRC-01).

Monique Nijhuis, IciStem consortium, presented on stem cell transplantation as a strategy for curing HIV infection. People living with HIV have a higher chance of cancers that begin in the cells of blood-forming tissue, such as the bone marrow, or in the cells of the immune system. They also have a lower survival rate after an allogeneic stem cell transplant than matched HIV-negative controls. The IciStem consortium is an international collaboration established to guide and investigate the potential for HIV cure in people living with HIV with cancers that need a stem cell transplant for treatment. The consortium maintains a database of people with the HIV-resistant gene and has identified over 22,000 donors with the gene to date. The two recent announcements of potential HIV cure from CROI 2019, the London Patient and the Düsseldorf Patient, both came through the IciStem consortium’s work.

Moses Supercharger, 2017 AVAC fellow, described African myths and misconceptions around HIV cure. The African continent currently has over 27 million people living with HIV. A major misconception is that HIV suppression is equivalent to HIV cure. Supercharger thinks we need greater education around HIV reservoirs that remain dormant inside the body, and increased emphasis on ART adherence across the continent. The people of Africa must be welcomed into the work towards a cure for HIV now, while it is still in its infancy, or we will confront the same challenges that currently inhibit the implementation and uptake of ART and PrEP in the parts of the world that could most benefit from them.

It’s a tradition to celebrate the anniversary of a lifesaving bone marrow transplant as a rebirth. With that in mind, the workshop organizers ended the day-long event by celebrating the 12th “birthday” of one of the world’s best known transplant survivors: Timothy Brown. On February 7, 2007, Brown underwent a last-ditch effort to cure his life-threatening leukemia. But what makes him different from other transplant survivors worldwide who have been reborn free of leukemia and other blood cancers is that thanks to the donor for his transplant he became the first person in the world to also be cured of HIV. Surviving and thriving to this day, Brown reminds us that we still need to advocate for funding and educate the public about the impact that a cure for HIV would have on society, while understanding the complex ways that a cure would impact people living with the virus.