The Space Needle rises over the former EMP Museum, rechristened in 2016 as the Museum of Pop Culture (or “MoPOP”). In the foreground, a sculpture by Claes Oldenburg called Typewriter Eraser, Scale X.

Will it make much difference for HIV prevention? 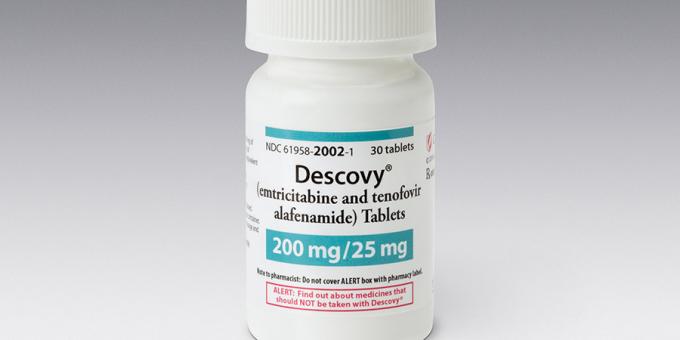 Now we know for sure—Descovy was found to be just as good as Truvada for preventing HIV.

That’s good to know, but how important is it?

The idea, of course, is that Descovy, the newer and kinder version of Truvada, would be safer to use for HIV PrEP (pre-exposure prophylaxis, or prevention).

Back in 2012, Truvada was a well-established HIV medication when it was approved by the FDA for preventing HIV infection in the first place. Today, it is considered 99% effective against HIV when taken as prescribed.

Then in 2016, the FDA approved a newer version of Truvada that’s safer on the kidneys and bones, Descovy. But you couldn’t take Descovy for PrEP, because the research wasn’t there.

The DISCOVER study results presented at CROI showed that of a large number of people put on either Descovy or Truvada for PrEP who were truly at high risk for HIV, almost none became infected with the virus. (See sidebar below, “The DISCOVER Trial Data at One Year.”)

When comparing these individuals to a similar group not in the study but who had similar risks, however, you could see how truly effective both drugs are at preventing HIV infection.

Moreover, the high rate of STIs in the study was a clue that way more than 22 people would have become HIV-positive had they not taken the prevention medicine. Half of all individuals in the study had at least one STI, whether they were given Descovy or Truvada.

Does it make a difference now that Descovy can be taken for PrEP instead of Truvada? (In April, Gilead Sciences filed a supplemental New Drug Application [sNDA] with the FDA for Descovy for PrEP.  If approved, this would mean a new use—called “indication” in the medical world—for Descovy.)

Yes, said Jenna Wimmer, a nurse practitioner from Howard Brown Health’s clinic at TPAN, in Chicago. “For some older patients, who may have renal problems, it makes a difference,” she said.

As usual, there are pluses and minuses to using a newer drug.

PrEP, however, is often discussed in terms of “seasons of risk.” For example, when someone is in a non-monogamous relationship, or is dating in hopes of finding a committed relationship.

“Our study did not have enough clinical outcomes either in the renal or the bone arenas to identify a difference between the two,” he said in a press conference. “Both of those are so uncommon in these young, and in our study population, relatively healthy population. I think it’s reassuring to know that both of these drugs actually do pretty well in terms of safety in this population. Whether we’ll ever know if there’s a clinical difference in outcomes would require a huge number of people and a long time of observation.”

The difference in drug discontinuation for renal issues or any other adverse event with the two medications was not statistically significant, he said.

Another point to consider is that Truvada is expected to come off patent in another year or so. That means a cheaper generic version can be made available. Insurance payors might even insist on that version being used for PrEP. (A generic has been approved by the FDA, but is not commercially available.)

There may be, however, certain groups for whom Descovy would be preferred. Those with pre-existing kidney or bone problems, for example.

There’s a seemingly never-ending search for better options. Just how much better Descovy for PrEP may be over Truvada remains to be seen.

DISCOVER trial data at one year