A woman walks past graffiti painted by the Wachata artists group to raise awareness about wearing masks to avoid COVID-19 in the Tanzanian city of Dar es Salaam. (Photo: Ericky Boniphace/AFP)

Like other important HIV conferences this year, the international AIDS meeting took place remotely via internet due to the world’s COVID-19 shutdowns. Appropriately, AIDS 2020: Virtual opened with global health leaders presenting information on how the new COVID world order was affecting HIV prevention and care.

“These are remarkable times—and defining times—for the global HIV movement and for the world. Every conversation we have now sits at the confluence of the COVID-19 pandemic and a new global reckoning with systemic racism,” said Anton Pozniak, president of the International AIDS Society President (IAS) and International Scientific Chair for the conference.

HIV in a COVID world

According to a survey from the World Health Organization (WHO), 73 countries reported that they were at risk of running out of HIV drugs due to the COVID pandemic; 24 of them were critically short. UNAIDS estimates that a six-month disruption of access to HIV antiretrovirals could lead to a doubling of AIDS-related deaths in sub-Saharan Africa this year alone.

WHO reported that the 24 countries running critically short represent one-third of all people on the planet living with HIV, and 8.3 million individuals taking antiviral medications.

UNAIDS issues a global report on the HIV epidemic at every international conference, titling this year’s release, “Seizing the Moment: Tackling entrenched inequalities to end epidemics.” 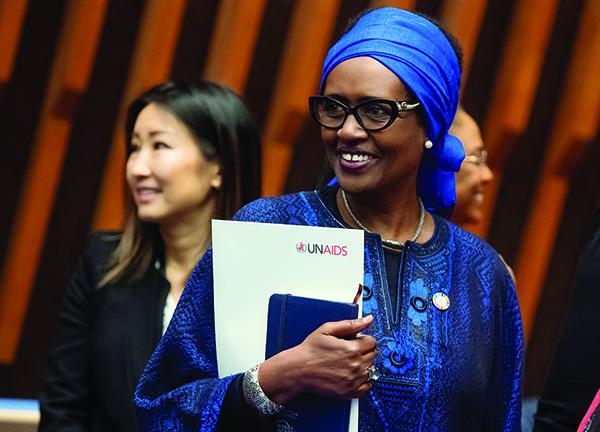 “The report shows remarkable but highly unequal progress around the world, most of the progress being in expanded access to antiretroviral therapy,” said UNAIDS Executive Director Winnie Byanyima. “But because the tremendous achievements that have been made have not been shared equally within countries and between countries, our targets for 2020 will not be reached. We have work to do.”

“We were already off-track to achieving our HIV goals, but now coronavirus is really blowing us completely off-track,” Byanyima said.

The 1.7 million new HIV infections last year was three times higher than the hoped for lower number of 500,000, and was driven by human rights violations, she said.

“This is about men who have sex with men. This is about sex workers, gay men, prisoners, people who inject drugs—these are people whose rights are denied, basically,” Byanyima said. “And it is about lifting the human rights violations and restrictions on them. … We need political will, to remove those barriers. In at least 73 countries we have laws that criminalize same sex relationships. In 160 countries we have laws that criminalize personal drug use. So we need to see progress there.”

The comprehensive 400-page report covers statistics, strategies to address the epidemic (such as ensuring gender and sexual rights), and goals for ending HIV. This year’s report includes a section about COVID-19, and ways to help people living with HIV in light of the pandemic.

The organizer of the conference, the International AIDS Society (IAS), issued its own report, “COVID-19 and HIV: A Tale of Two Pandemics.” According to the report, “COVID-19 is impacting the HIV response in three key ways. First, the shift of health system resources to focus on COVID-19 and national lockdowns has severely affected HIV treatment and prevention services, including interrupting care and increasing obstacles to accessing treatment, clinical services, and psychosocial support. Second, COVID-19 has exacerbated challenges for people living with HIV and key populations who are experiencing renewed stigma, with evidence of increasing vulnerability to HIV in the lesbian, gay, bisexual, transgender, and intersex (LGBTI) community. Third, the COVID-19 pandemic is highlighting existing system-level weaknesses in healthcare and supply chains, adversely affecting people living with HIV.”

The report outlined 10 recommendations for adapting HIV care to a COVID world, such as alternative ways to refill medications. There were also 10 recommendations for implementing COVID-19 care based on the HIV experience, such as addressing stigma, social justice issues and stigma in health care, and securing political commitment to evidence-based knowledge.

Young gay men and other MSM aged 15–24 are at particular risk inhigh-income countries of western and central Europe and North America, accounting for 36% of new diagnoses in those regions 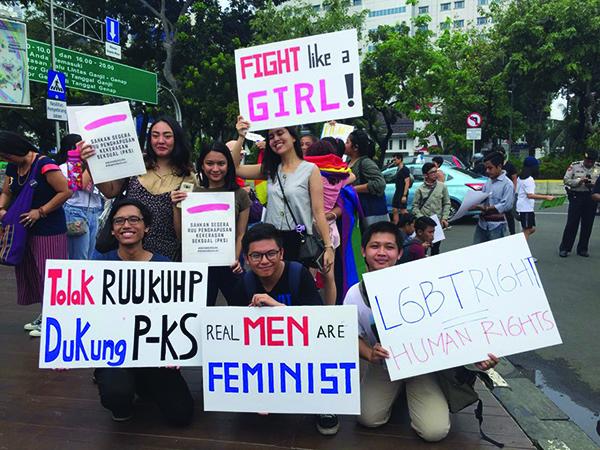 “We know that the COVID-19 crisis is amplifying and exploiting [areas] where there are fragilities,” said UNAIDS Senior Economist Erik Lamontagne, “so we aimed to give a voice to, and understand the impact of, COVID-19 on one of the communities most stigmatized and disproportionately affected by HIV—lesbian, gay, bisexual, and transgender people.”

UNAIDS brought together a group of scientists and community activists to create an online survey in 10 languages, conducted from mid-April to mid-May. At the time of IAS, more than 20,000 LGBTQ people from over 130 countries had responded. Seventy-five percent of respondents reported being partially or totally confined to their homes due to COVID-19 lockdowns.

“About 12% of the respondents were living with HIV,” said Lamontagne. “The good news is that 72% of people living with HIV retained access to their lifesaving HIV treatment. However, 21%—a fifth—reported that because of the lockdown and the restrictions on movement, they had limited access to ART, and furthermore, 7% are at risk of running out of HIV treatment because they cannot access or refill it. And we also found that LGBTI people who were from racial or ethnic minorities face systematically lower access to HIV services.”

The survey showed that 13% of respondents had lost their job due to the pandemic, and 20% were at greater risk of losing employment.

“A quarter of the respondents also say that they had started to cut meal sizes or skipping meals because there’s not enough money for buying food due to the COVID crisis,” said Lamontagne. “We also found that sudden change in income has induced behaviors that increase susceptibility to HIV infection. For example, 1% reported they had started sex work due to COVID-19 crisis. And for those engaged in sex work, the economic instability lowered their negotiating power with clients. As a result, 4% have been engaging in riskier sex and 1% engaging more in condomless sex.

“The take-home message here is that COVID increases the vulnerability of groups that are already disproportionately affected by HIV,” Lamontagne said in conclusion. “It exacerbates the inequality, so targeted interventions are required from community networks as well from the governments to help the LGBTI community not only to survive but emerge from the crisis.”

Asked about a potential lull in HIV transmissions due to social distancing required with COVID-19, Lamontagne said that social distancing may lead to less contact, but at the same time, there is another risk. The inability to access medication may move people from HIV to AIDS.

He then used the question to address stigma. “One of the challenges, I think, as health care providers and health care organizations, is that it’s important that we don’t stigmatize people, people who might be engaging in sexual behaviors during COVID-19, so that they won’t feel ashamed to come forward and request PrEP and STI testing, for example, HIV testing. This is an issue in general in terms of stigma with HIV and PrEP care, but I think it can be exacerbated if the message is that you should be ashamed for engaging in sexual contact at a time when people are experiencing tremendous social isolation. And of course, sexuality is an intrinsic human quality and people have the need to connect with other people. So, I hope that the messaging can be open and non-judgmental to people, that to the best of our abilities we’re creating a safe environment among providers and facilities for people to come in for preventive sexual health care.”

As the new coronavirus has hurt HIV treatment, it also hurts HIV prevention. Boston researchers looked at the effect of the COVID-19 outbreak on HIV pre-exposure prophylaxis (PrEP).

“As we know, COVID-19 has disrupted health care globally, which could create important barriers to PrEP-related health care efforts to control the HIV epidemic,” said Douglas Krakower, MD, of the Division of Infectious Disease Faculty, Beth Israel Deaconess Medical Center and an adjunct faculty member at The Fenway Institute, Boston.

COVID-19 first emerged in Boston in March, followed by a large surge of new cases in April.

“The setting for our work was Fenway Health, which is a community health center that specializes in LGBTQIA+ health care research and education, and is the largest provider of PrEP in all of New England,” said Dr. Krakower. “What we did is extract electronic health records data of Fenway patients from January through April 2020 to characterize a number of aspects of PrEP-related health care, including PrEP refill lapses, which we define as not having a PrEP prescription refill before the end of a prior prescription; new PrEP starts; testing for HIV and sexually transmitted infections; and use of telehealth medicine.”

The study cohort included 3,520 PrEP patients. The average age was 37. Most, 73%, were White, with 14% identifying as Hispanic, 6% as Black or African American, 6% as Asian, and 4% as multiracial. The vast majority, 92%, identified as cisgender men. The majority, 86%, also had private insurance; the remainder had public insurance.

“In terms of our main findings, we found that PrEP refill lapses increased by 191% from January to April 2020, with 140 such refill lapses in January and 407 as of April. New PrEP starts decreased significantly, by 72% from 122 new starts in January to only 34 in April at the peak of the surge,” Dr. Krakower reported. “HIV testing also decreased substantially, by 85% with 1,014 tests conducted in January and only 151 in April. There was a single positive HIV test in this four-month period and that occurred in January prior to COVID. Gonorrhea and chlamydia testing also decreased by the same degree of 85% and positive tests decreased by 81% from 130 positive tests for gonorrhea and chlamydia in January and 25 in April.”

Similar to other IAS reports regarding clinical care, Fenway responded quickly in the face of coronavirus. “We observed a near complete shift to telehealth quite rapidly, with none of the visits at Fenway being conducted by telehealth in January or February and 98% as of April.”

“Our major conclusion based on these data is that COVID-19 was associated with major disruptions in PrEP health care at our health center despite a very successful pivot towards telehealth quite rapidly,” Dr. Krakower said. “A really important limitation of this study is that we could not ascertain sexual behaviors or pill-taking behaviors using the structured electronic health data we had.”

Additional study is needed to assess changes in adherence to prevention, with particular attention paid to the most vulnerable populations, said Dr. Krakower.

“In terms of the ethnic disparities, I think we need to learn more about the individual level, why people might be having PrEP refill lapses,” Dr. Krakower responded when asked about the discrepancies by race and ethnicity. “Are they facing economic vulnerabilities that make it challenging to continue with things like copays or other financial characteristics? Were they too scared to come into the health center for fear of exposure to COVID-19? Were there changes in sexual behaviors? We really need to dig in deeper, which are our plans for our future studies.”

New HIV diagnoses in 2019 across the world: 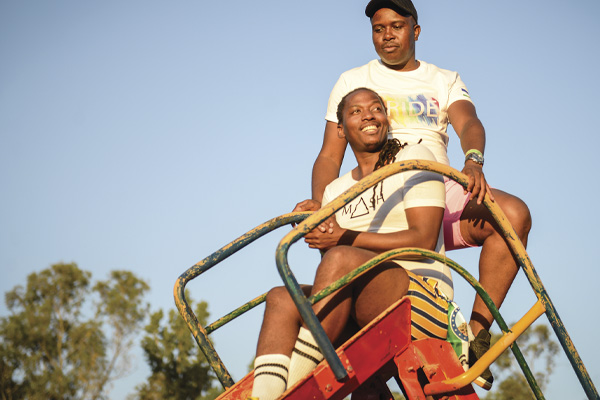 Leshoboro (left) and Jerry at a pride event in Maseru, Lesotho, organized by the People’s Matrix Association. The association campaigns for LGBTI rights in Lesotho. 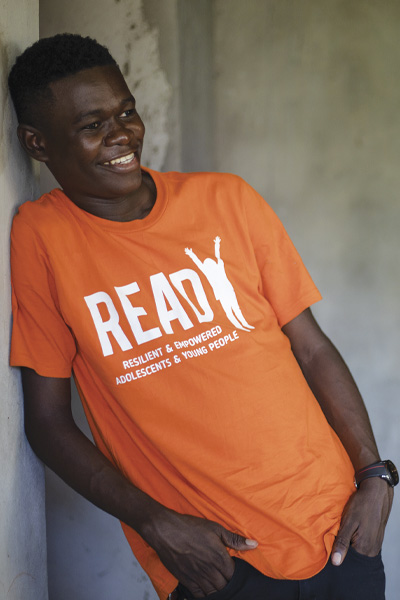