A look at the vulnerabilities behind detectable virus

The world is still catching up to the facts of U=U: people on effective treatment with undetectable HIV viral load are untransmittable—they cannot pass the virus on to their sex partners. But what about individuals who are unable to achieve—or maintain—undetectable viral load? Black advocates stress the need to also understand V=V: viremia equals vulnerability. Here, viremia refers not just to virus, but specifically to detectable viral load. At the virtual U.S. Conference on HIV/AIDS (USCHA) 2020, held in October, longtime HIV prevention specialist and consultant Leisha McKinley-Beach, of Atlanta, discussed these issues with Larry Scott-Walker, co-founder and executive director of Atlanta-based HIV support organization THRIVE SS. 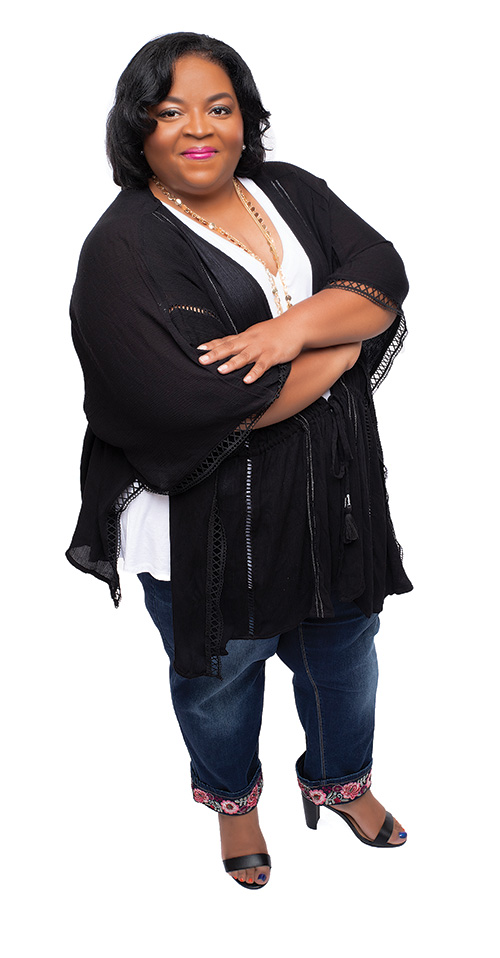 ‘There are social and economic and environmental reasons why one may not be able to achieve or maintain their viral suppression.’ —Leisha McKinley-Beach

Leisha McKinley-Beach: We know that the science behind U=U is undisputable. We’re talking about people with HIV who have achieved—and maintained—an undetectable viral load by taking their meds every day cannot sexually transmit the virus to others. So that’s a huge milestone within our HIV movement when we talk about the tools and the skills that we now have to see ending the HIV epidemic.

When we look at this term “undetectable,” what does that really mean? Is it that today I went in and I got my viral load done and it’s undetectable, and that’s it? So from here on out I’m undetectable? We know that is not the case. The U=U campaign is very succinct. We have to be able to explain to people who are living with HIV and their support network truly what undetectable means. But it is also ensuring that there are systems in place to help that person sustain their undetectable status.

And finally, when we talk about any of our initiatives, particularly those that have centered people living with HIV, let’s not always talk about it from a place of risk, but let’s talk about it from a place of improved health. Let’s talk about what that means for Black love. For self love. And be able to support those individuals that even with their best effort may not be able to achieve viral suppression, and that that is okay. And that there’s no shame or judgment. Let’s continue to focus on how we center them to help them get to the best quality care and health that’s possible. 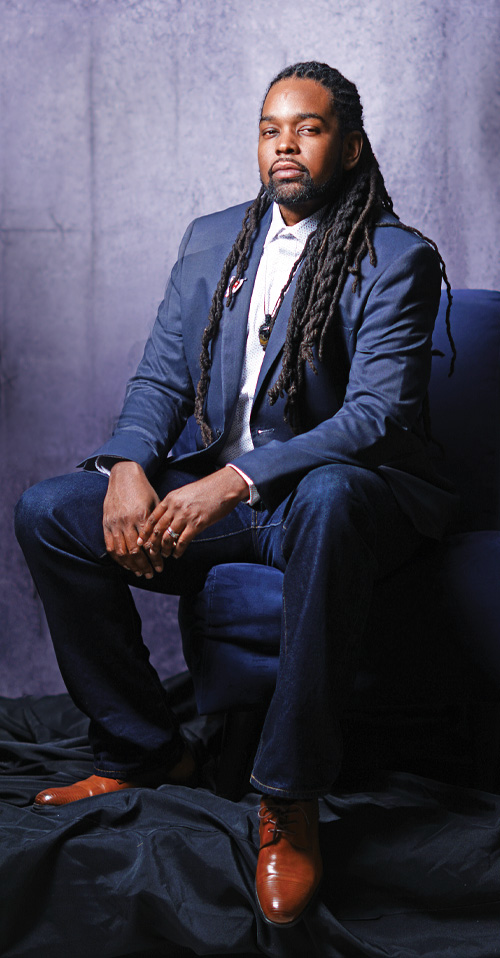 Larry Scott-Walker: Campaigns can actually do harm when we don’t express them fully. The PARTNERS [serodiscordant couples] Study [is important] because the campaign is nothing without the science behind it.

With V=V [viremia equals vulnerability], notice that we didn’t say “viremia equals vulnerable,” because we’re not our HIV status. I’m not vulnerable. We’re resilient. We’re powerful. We’re magic. But the vulnerabilities that present for people living with HIV are with unchecked viral load. It leaves us open as people living with HIV to a host of opportunistic infections, illnesses, complications, social stigmas that should not exist, and also leaves us vulnerable to early death. We all want to live long, thriving lives.

We have to be grounded in the understanding that not every person who is living with HIV, who is detectable or has a detectable status, is in a vulnerable state. Some people may never reach undetectable status. And they could take their medication every day. As long as we are working with our doctors and our care team to stay healthy and to stay in the driver’s seat of our health, then we’re doing what needs to be done. V=V is speaking to those people who for whatever reasons—stigma, change in life status, or anything like that—that they’re actually disenfranchised or unable to take care of their HIV status. [Some] are at a place where they elected to stop taking their HIV meds.

V=V is a way of understanding the why, the who, and the how we best support people who are living with HIV who may be out of care or may not be on their ARVs [antiretrovirals] and similar situations.

Some young Black gay men and some other demographics of young people may feel invincible. I’m healthy. I’m young. I don’t feel sick and I don’t want to take this pill.

Some Black women … I’m actually in Baltimore, Maryland right now because my sister was a person living with HIV. She succumbed to HIV because she dealt with a lifetime of stigma. Because she was a woman, she was living with HIV, she feared the judgments for both herself and her sons.

Some people who use drugs are incapable of sustaining viral suppression. They take their meds every day; they go to the doctor. They may just not achieve less than 50 copies of HIV.

Some long-term survivors aging with HIV have been taking different medications over the years for various reasons and may not be able to achieve viral suppression, especially in this time of COVID. We have the largest network of Black gay men living with HIV in the country. A large portion of them are people aging with HIV, over the age of 50, who’ve been living with HIV for over a decade. They’re challenged in general with isolation, with feelings of depression, because they’re aging. Their social status may have changed in the community because it seems that some communities are obsessed with youth. And being in this place of COVID and told to physically distance is bringing some things up for many long-term survivors. I’ve heard many say that they’re challenged to take their medications.

Some of the reasons why people elected to leave care or may not adhere to their medical regimen that stuck out for me were … bad provider experiences. I cannot tell you how much we hear this at THRIVE. We link [many] people back to care or to care for the first time and one of the main reasons that people note for leaving care was due to some bad experience with a provider. My doctor doesn’t listen to me. The girl at the front desk yelled my name and I felt like everybody saw me. That caused me to lose the will to even want to engage medical care anymore. Or maybe something changed. I lost my job. I lost my house. I lost my insurance. … Or your job switches your insurance, so now where you go they don’t accept the insurance. That disruption may actually cause a person to leave care.

Social stigmas—the stigmas that are put on us every day, and not just HIV-related stigma. But racism, sexism, transphobia. These stigmas impact how we see ourselves, how we move through the world, how we address our HIV.

There’s stigma attached to care facilities. I will never forget when I first moved back to Atlanta. I was working at an ASO and I was on the bus. We passed one of the largest care facilities for people living with HIV, and the bus driver said, “Oh, that’s the AIDS clinic.” I was aghast. And hearing this on the bus I immediately thought, what if I were a young person who felt a high level of stigma and I was going to my first appointment? I might have stayed on that bus and went back home because I wouldn’t want to be seen as a person going into the AIDS clinic.

Lack of support—support saves lives. Actually, through an effort of THRIVE, the CDC updated their recommendations for HIV testing to include support for people living with HIV, directly linking them immediately to support, understanding that support can save lives. That lack of support is a social determinant of health.

Now, we say “social determinants of health” a lot in public health. I wanted to break down the social determinants of health here. [See box.] A lack of income, educational opportunities, safety in your area, you know, even seeing your area not being a beautiful area. I’m from East Baltimore and growing up I saw broken bottles and people who were on drugs and things like that, and that stuff actually seeps into your mind. It affects not only your health physically, but your mental health. These are all things that impact a person living with HIV’s desire to engage in medical care.

We operationalize V=V by first understanding that we are people. That we are not disease states. I am not HIV. I am virally undetectable, but I’m not undetectable. I’m very detectable. I’m here. You know I have worth and agency. Inquire about our whole lives to identify barriers—vulnerabilities—that may challenge our ability to take care of ourselves. But also inquire about our lives to identify those things that you use to empower us around mental health and utilize our goals. My goals were how my parents and my brother helped to push me through my education and keep me focused because they would hold my goals up. We should do that same thing for people who have HIV.

Remember that there is no pill to rebuild will. And if our minds and hearts aren’t well, or our ability to take care of ourselves is challenged, then we’re not going to prioritize HIV.

You know, it’s maddening to think that a person can say I’ve been really depressed because of something that’s going on in their life and that’s the reason why they decided to not take their pills, and for a practitioner to say, “Take your pills because you can live a happy healthy life.” No, deal with the thing that’s going on with my life and when you address and honor that real thing that’s happening, you inspire me. You don’t have to drag me to this place of undetectability because I’ll feel that you care and I’ll be open to your messages.

Also understand that in order to sustain U=U we have to train ourselves to be aware and to be looking for rising vulnerabilities, especially those that don’t directly relate to HIV. You and your boyfriend just broke up? How’s that making you feel? Understanding that losing your partner is not an effect of HIV, but it’s a thing that could impact your living with HIV. So I’m going to do everything in my power to get you to wherever you need to get to so that you can deal with the loss that you’ve experienced, the grief around losing a person you love, and so that you can continue to prioritize your HIV care and treatment.

Leisha McKinley-Beach: Phill [Wilson, of the Black AIDS Institute] would say that we were greater than the middle passage, we were greater than Jim Crow. And I’m adding now, we are greater than police brutality. We’re greater than COVID, and we’re going to be greater than HIV. With leaders like you, who keep showing up and reminding us that it’s not just the HIV, it’s all the other issues that got us here, to have a conversation about HIV that has to be addressed. If there is truly a commitment to ending this epidemic, then there is a commitment to helping folks achieve viral suppression under whatever campaign umbrella. U=U, V=V, combining them together—if the commitment is real, then we have to address all of the vulnerabilities that got us here in the first place.

The presentation has been edited for space. Read the complete transcript online, including a look at U=U campaigns.