A dog’s power to heal

This is a story about the healing power of unconditional love. More like 36 stories—that’s how many are shared in a new book, When Dogs Heal, about the bond between people living with HIV and their dogs, and how it changed their lives. Through a dog’s love, people found acceptance and overcame stigma, shame, and other issues.

In 2010, Rob Garofalo, MD, MPH, was struggling in the aftermath of an assault and a series of traumatic events that led to his HIV diagnosis. As director of adolescent HIV services at the Ann & Robert H. Lurie Children’s Hospital in Chicago (where he is now division head of adolescent medicine), he has always been passionate about the care of LGBTQ youth.

“Although I had spent my life caring for people affected by HIV, I found it hard to offer myself the same love and compassion that I had spent my life teaching others to have for themselves,” he says. “I didn't think things like peace and joy were ever going to be possible in my life again.

“Many of us living with HIV have had those moments. At that moment, I had this not really rational, impetuous thought. I sat on my bed, debating taking my own life, and at the next moment, I was like, maybe I should get a dog! I remember calling a friend who thought that was the craziest idea ever, probably because it was.”

Garofalo did a Google search for puppies and Chicago, and a picture of a Yorkshire terrier pup appeared. He contacted the breeder, who was in the area, and within a couple of days, Garofalo brought home the pup, whom he named Fred.

“Honestly, it was a selfish decision,” he admits. “I couldn't even care for myself, what made me think I could care for a dog? But the one thing about having a dog—he didn't have any patience for my self-pity. He didn’t have any room for my self-isolation. He wasn’t going to put up with my not being present.

“What my dog has been is my anchor—an anchor to goodness, an anchor to unconditional love, an anchor to this pure little soul that needed me. People living with HIV can understand this. I needed to be needed, and Fred as a puppy was that for me. He needed me to feed him and walk him and care for him. In doing that, he literally brought me back to life.”

Garofalo rebuilt his life around his dog, creating a nonprofit organization called Fred Says, raising money for various HIV service organizations throughout the U.S., including TPAN, publisher of Positively Aware. During a trip to Los Angeles, he was having coffee with friends, writer/editor Zach Stafford and dog photographer Jesse Freidin, to discuss ideas for Fred Says. That’s when he blurted out, when dogs heal. Uncertain at first what form the idea would take, it became a photo book, telling the stories of people in their own words, of the transformative experience of a dog’s love following their HIV diagnosis.

“We talked about how powerful it was, how [Rob’s] dog helped him move through to acceptance of his own diagnosis,” recalls Freidin. “From there, we wondered if there were other people who are dealing with HIV who have stories like this. We got so excited at the prospect of telling a new story about HIV.”

What followed was a nearly six-year-long project, finding people living with HIV who would share their stories, and interviewing and photographing them for the book. Stafford and Garofalo’s niece, Christina, a Los Angeles-based TV writer and journalist, worked on the interviews and stories. Each of them brought something personal to the book. 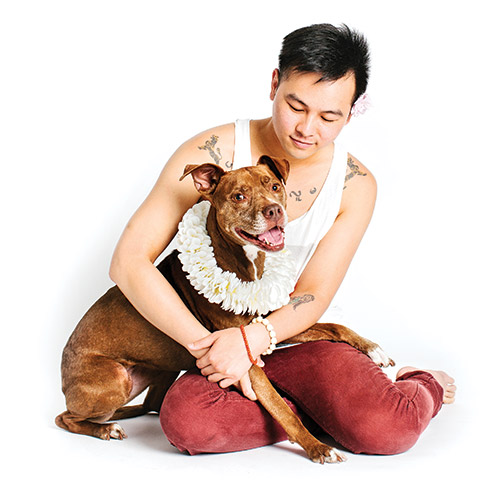 Adam and Laila: “Laila showed me what unconditional love truly is. When humans were casting me out by saying hurtful things behind my back, Laila showed up for me—she was consistently loyal—and she still shows up for me. Every single day, she meets me with love.”

“I like to work on projects that center around joy and celebration of queer people and what we've been through,” says Stafford. “What was fascinating was that so many people told similar stories in different contexts—they felt no one would love them, that they did not feel deserving of love. The dogs changed that for them. They learned how to love themselves.”

Christina, who is also the voice of Fred Says on social media, was brought in to finish the interviews when Stafford’s schedule became too busy. “It's not unusual for me to talk to a stranger and learn a lot about them. I let them tell their story. I've had my own mental health struggles with anxiety and shame. Having grown up with dogs, I understand feeling alone but how a dog can make a difference.”

Work on the book unfolded over the years as Garofalo and Stafford traveled to Chicago, Los Angeles, San Francisco, and Atlanta. They contacted local AIDS service organizations and used dating and social media apps to find dog owners living with HIV who might be interested in being interviewed.

“Recruitment wasn't easy, but it’s definitely part of the story of the book,” Garofalo says. “Each city was really different. In San Francisco, we met a lot of somewhat older men who were long-term survivors of HIV, some of who had been diagnosed in the ’80s. Their stories were very different from some of the younger people we met, say, in Atlanta. Even the stigma was different. The people we met in San Francisco were much more apt to be open about their diagnosis, whereas in Atlanta, we had a lot of people who initially expressed interest, but when they found out that they had to be open or disclose their HIV status as part of such a public project as a book, a number of people backed out. It was a balancing act. The introduction of the book, which I wrote, tells this well. It was trying to find a unicorn—you had to be HIV positive, be open and talk about being HIV positive in a public space, have a dog, and have a compelling story to tell about your dog. When you read the book, the people in it are really brave and beautiful.

“I think about Paulo and his dog Stud, and all the trauma he went through as a Hurricane Katrina evacuee, how he acquired HIV after being evacuated from New Orleans to Chicago, is such a heartbreaking story. In each story, you hear about how devastating the diagnosis of this disease was, but in the end, the central theme is about life and living and love. There's a story about Brad and Thor in San Francisco. Brad was using drugs, and in a police raid, his roommate’s dog, Thor, was stabbed. At that moment, in order to take care of the dog, Brad decided to get clean and never use drugs again. There's a story about R.J. and Stoli, in Atlanta. R.J. was marginally housed and really wanted to participate in the photoshoot. He needed a lot of support; I called an Uber to get him and his dog to the photoshoot. The story about what his dog helped him to overcome in terms of R.J.’s physical disabilities is powerful.

“When you read the book, you see that for each person, the journey was different. For each person, their dog—or dogs—served a different role. But at the core of those stories is coming back from some form of devastation. Their HIV diagnosis had brought them to their knees, whatever that meant in their lives. Each of them found the strength and the power to go on in part because of the unconditional love their dogs provided them.” 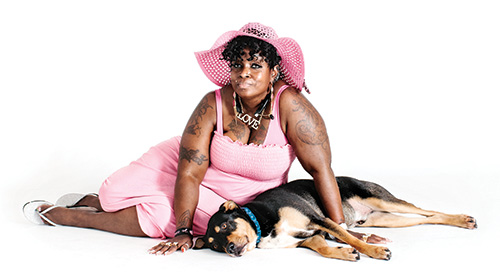 Sharon and Dulk “One day, my sister went to an animal shelter and adopted Dulk. From the moment she brought him home to me, he never missed a beat. Dulk became the thing I’d needed most since my diagnosis: a companion.”

The care of a dog

“Everyone has to do a bit of self-exploration and self-examination. The truth is, I am a man who has a great deal of privilege, and so I've been able to have a pet sitter and afford many aspects of having a dog that far too many people living with HIV might not be able to. The decision to have a dog in your life is not one that should be taken lightly. I accept that my decision was impetuous and selfish—I don’t advise that strategy.

“They have to ask themselves if they feel that they have the time, the capacity, and willingness to take care of another living creature. What will the addition of an animal or a dog mean for them and their lives? It’s truly a commitment. I’m not naïve enough to say it's like having a child. It's not the same. But they do require from us a lot of love and nurturing and caring. If for whatever reason, someone is incapable of making that type of commitment, either emotionally, financially, or with their time, then having a dog might not be the right answer.

“There’ve been news stories about an increase in dog or pet adoptions during the pandemic, I think particularly for people who are living alone. I'm someone who has clung to his sobriety as a lifeline over the years. I don't know if during the isolation of the pandemic, [how I would manage] without my dog being the one thing to consistently keep me company through stay-at-home orders and self-quarantines. I have such profound gratitude for my dog the past year that transcends even the gratitude I have for him around my HIV diagnosis. There's an element around COVID and this pandemic for many of us who have pets, especially dogs in this case, that I live in a newfound state of gratitude around the magical qualities they bring to our lives.”

On many levels, says Garofalo, some of the people featured in the book had to be convinced that getting a dog might be helpful to them. For each of them, he says, there came a moment when they recognized how mutually beneficial the relationship was.

“What I've learned through this book, and in part what I've learned from my dog Fred, is that authenticity and honesty about who I am in my journey is in some ways my superpower. If I’m not honest in both my personal and professional spaces, then HIV retains some power over me that I refuse to give it. I'm fully honest about my HIV status, about my history of addiction and recovery, about all the things I need to be in order to live my best life.”

Selected personal accounts from When Dogs Heal can be found at whendogsheal.org/portraitsandstories. Scheduled for release on March 3, the book can be pre-ordered on Amazon.com.

To help identify people living with HIV in Chicago who might benefit from the companionship of a dog, Garofalo, who serves on TPAN’s board, worked with the organization to create a program called Paws ‘n’ Effect. Applicants are thoroughly screened before being paired with a rescue dog from a local animal shelter. For more information about the program, go to tpan.com/paws-n-effect.