Evidence for the effectiveness of PrEP comes from several large clinical trials that looked at different populations at risk for HIV.

Before diving into the data, it’s important to understand that scientists can examine the data generated by studies in different ways. This helps them assess the likely success of a drug in “real world” scenarios, as well as how it holds up under more ideal conditions.

Not surprisingly, response rates are usually higher when people take a drug as directed, which is the ideal. But the overall response rate (which includes people who took the drug less often or not at all) is also useful, since it shows whether people can use the treatment in the “real world.” If a treatment is too inconvenient or causes too many side effects, for example, many people will not use it consistently and its overall effectiveness will drop.

PrEP for gay and bisexual men

The first widely reported PrEP data came from iPrEx, a study of 2,499 HIV-negative men who have sex with men, plus a small number of transgender women, at 11 sites in six countries, including the United States.

Participants were randomly assigned to take either Truvada or an inactive placebo pill once daily. Everyone also received a package of prevention services including risk-reduction counseling and free condoms. After the main randomized study ended, participants could continue taking Truvada in the iPrEx open-label extension, or OLE.

The risk of HIV infection was 44% lower overall in the Truvada group compared to the placebo group. Among people with measured blood drug levels indicating good adherence, the risk decreased by 92%. A mathematical model estimated that PrEP effectiveness could reach 99% for people who took Truvada at least four days a week.

About 1,600 people continued on to iPrEx OLE. Three-quarters chose to keep taking Truvada, while the rest did not and served as a control group. Unlike the randomized trial, OLE participants knew they were getting the active drug and were informed that it reduces HIV risk. This is important, as during the main study participants were warned that they might be receiving a placebo and that even if they received Truvada, it might not work.

The risk of infection in the OLE study was 49% lower overall with Truvada compared to the untreated group after adjusting for risk behavior. Among people with blood drug levels showing they took Truvada at least four times per week, there were no new infections—100% efficacy. But only one-third managed to reach this level of adherence. People who took Truvada two or three times per week had an 84% lower risk of infection, but those who took fewer than two doses saw no significant protection.

At this year’s Conference on Retroviruses and Opportunistic infections, researchers reported findings from two other studies of PrEP for gay and bisexual men. Both were stopped ahead of schedule after an early peek at the data showed PrEP reduced HIV risk substantially.

Men in the immediate PrEP group had an 86% lower overall risk of HIV infection compared to those who waited. However, one man probably already had an early HIV infection at study entry and two others appeared to not be taking Truvada when they became infected.

The second study, called Ipergay, enrolled 400 gay and bisexual men in France and Canada. This trial tested “on-demand” or event-driven PrEP. Participants were randomly assigned to take Truvada or placebo, but instead of taking it every day, they took two pills together up to two hours before having sex, and then two more pills, one at 24 and another at 48 hours after sex.

Men who took Truvada had an 86% lower overall likelihood of HIV infection compared to those who took placebo pills—the same as in PROUD. Again, the two men infected in the first group appeared to have stopped taking Truvada.

Importantly, the men in Ipergay had sex often enough that they took 14 Truvada pills per month on average. This works out to nearly four pills per week—the number found to be highly effective in iPrEx. It is still not clear whether on-demand PrEP will be as effective for men who have sex less often, say once a month.

Because we don’t know for sure how much Truvada prior to and after sex is necessary to provide protection, the CDC and others are recommending that people not try this strategy at this time. 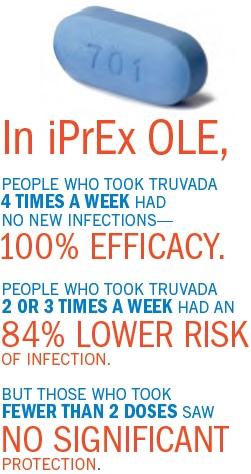 The risk of HIV infection fell by 75% for negative partners using Truvada and by 67% for those using tenofovir alone. Among participants with detectable tenofovir blood levels, however, risk reduction rose to 90% and 86%.

Similarly, the TDF2 study, which enrolled more than 1,200 HIV-negative heterosexual men and women in Botswana, saw a 62% risk reduction among participants randomly assigned to take Truvada compared to those taking a placebo.

It is now widely known that when the HIV-positive partner in a serodiscordant couple starts antiretroviral therapy (ART) and achieves an undetectable viral load, their risk of transmitting HIV is close to zero—a concept known as treatment-as-prevention (or TasP). In Partners PrEP however, none of the HIV-positive partners were on treatment at the start of the study and only 20% began treatment during follow-up.

The Partners PrEP team conducted a follow-up study known as the Partners Demonstration Project, which enrolled 1,013 mixed HIV status couples. HIV-negative partners were offered Truvada PrEP until their HIV-positive partner started ART, continuing for the first six months of their partner’s treatment. In this case PrEP acts as a “bridge” to ART, offering protection until treatment fully suppresses viral load.

PrEP adherence was high and the overall risk reduction was 96%. The two women who became infected did so while neither partner was on PrEP or ART with an undetectable viral load—there were no new HIV infections among couples who actually used this combination prevention approach as intended.

The oral tenofovir and tenofovir gel arms of the VOICE trial were stopped ahead of schedule when early data showed they would not be able to demonstrate a protective effect; Truvada also ended up working no better than placebo pills. Likewise, in FEM-PrEP, women assigned to take Truvada were no less likely to become infected than those taking a placebo. More recently, FACTS 001 found no difference in HIV infection rates for young women using tenofovir or placebo gels.

PrEP could not show a significant protective effect in these studies primarily due to low adherence—most of the women did not use the pills or gel often enough for them to work. What’s more, actual adherence fell far below self-reported levels. Reasons for not taking PrEP
consistently ranged from concern about side effects to fear of stigma.

The common theme running through all these studies is that good adherence is crucial for getting the maximum benefit from Truvada PrEP.

As noted, a majority of participants in iPrEx did not take Truvada often enough to see an overall beneficial effect from PrEP. The heterosexual couples in Partners PrEP did much better, while the young women in VOICE and FEM-PrEP did not take their pills or use the vaginal gel enough to provide any significant protection.

We know that excellent adherence is possible under the right circumstances. For example, among the more than 500 people (mostly gay men) who have received Truvada PrEP at Kaiser Permanente in San Francisco, so far there have been no new HIV infections, suggesting that most are taking it consistently.

But we need to learn more about what factors encourage good adherence. In early U.S. PrEP demonstration projects, 92% of participants in San Francisco took PrEP at least four times a week, but this fell to 78% in Washington, DC, and 57% in Miami. In iPrEx OLE, adherence was higher among men who reported more HIV risk behavior, but it fell off most among the youngest participants—a group known to have a high infection rate. The Partners PrEP study found that adherence counseling helped participants use PrEP more consistently.

“Having used a condom yesterday provides no protection if you don’t use a condom today,” Dr. Grant said, but iPrEx OLE showed that “PrEP remains highly effective, even in real-world circumstances in which adherence may not be perfect.”

What’s next for PrEP?

While daily Truvada is the only regimen currently approved for PrEP, new options are in the works. The Ipergay study suggested that taking Truvada before and after sex, rather than every day, may be enough. Further research and the final results of Ipergay will be needed to guide less-than-daily PrEP, however. Other antiretroviral drugs are also being tested for PrEP, including Selzentry (maraviroc) and a new formulation of tenofovir (tenofovir alafenamide or TAF) that is easier on the kidneys and bones.

Researchers are also testing other PrEP delivery methods. These include long-acting injectable drugs like cabotegravir and implants that release drugs slowly over time. Animal and early human studies suggest that once-monthly or even quarterly injections may offer long-term protection against HIV. Other studies are looking at vaginal and rectal microbicides, or HIV-killing agents in gels, dissolvable films, or slow-release vaginal rings. These new methods will give users more options and help overcome inconsistent adherence—the major barrier to PrEP effectiveness.

Is PrEP Right For Me?

PrEP And Being Trans

LIZ HIGHLEYMAN is a medical journalist who has written about HIV and hepatitis C for more than 20 years. She is editor of HIVandHepatitis.com and has written for publications and websites including Aidsmap, the Bay Area Reporter, BETA, POSITIVELY AWARE, POZ, and The Well Project.