Making Good on the Promise of PrEP

How Jim Pickett is making PrEP a household word

If you look at Jim Pickett’s 20-year career, it’s hard to believe that this wasn’t his intended path.

Pickett, who is currently AIDS Foundation of Chicago’s Director of Prevention Advocacy and Gay Men’s Health, is a long-term survivor who has spent the past two decades traveling the country (and the world) raising awareness and pushing for innovative prevention methods, which currently includes his fierce activism around PrEP.

After dropping out of college and moving to Chicago, the Wisconsin native wrote for the now-defunct GAB, a tongue-in-cheek weekly zine about gay nightlife. During his tenure there he penned some pretty salacious gossip columns and crafted insanely witty serials, such as “‘Poop Stain with Miss Margie” and “The Adventures of Bottom Boy.”

And then in 1995, Pickett tested positive and decided that if his life was going to change, so should his writing.

“Two years after my diagnosis, I started the column ‘Sick: A Body of Work in Progress.’ It delved into my own fears and the schizophrenic experience of living with this disease—a disease that so many of us thought we were going to die from.”

He adds, “I felt like if I wanted to be a ‘real’ writer, I had to do something more than ‘Poop Stain.’ I ended up unwittingly becoming an HIV poster child,” he admits.

It was this intensely personal work that catapulted Pickett into public health, working with the Chicago Department of Public Health on syphilis and crystal meth awareness for gay men and managing the multimedia project The Faces of AIDS: Living in the Heartland, before working with the AIDS Foundation of Chicago in 2004 doing policy work. Pickett also penned the extremely popular column “Pickett Fences” in POSITIVELY AWARE for nearly a decade.

But over the years, Pickett saw that he was immensely attracted to HIV prevention work. 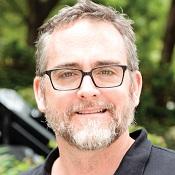 Pickett, who is also a staunch microbicides advocate, definitely sees PrEP fitting into that taboo category, given how polarizing the prevention tool has been, especially in the gay community, since its debut.

"Fifteen years ago I was really dismissive of PrEP, but the more I read and followed the science, I got really excited! For so long the only tool we had was condoms and now we have a pill that not only can prevent transmission, but can serve as a gateway drug to get people linked into primary care.”

It’s this excitement that helped Pickett become a PrEP tour de force, spearheading AFC’s efforts with PrEP literacy trainings, providing PrEP referrals, and amplifying the voices of people on the medication. Most important, Pickett and AFC have been the leaders in fighting against the state’s governor Bruce Rauner, who halted the much-anticipated PrEP 4 Illinois assistance program.

But Pickett points out that his PrEP advocacy is truly about collaborating with others.

One such partnership is the Chicago PrEP Working Group, which Pickett oversees with the Chicago Department of Public Health. This “energetic and great” group of over 100 organizations and advocates works together to help break down structural and cultural barriers that make PrEP hard to access for communities in need. In addition, the working group has collaborated on an online resource listing citywide providers and organizations that provide PrEP, and, with AFC’s leadership, has raised almost $500,000 to increase clinical capacity and launch a comprehensive PrEP awareness campaign set to debut this fall.

KELLEE TERRELL is an award-winning filmmaker and freelance writer who writes about race, gender, health, and pop culture. Her work has been featured in Essence, the Advocate, The Root, POZ, The Huffington Post, and thebody.com.