This article will provide a brief overview of two selected presentations—one for HCV and another for HBV—from an affiliate event organized by the National Viral Hepatitis Roundtable: “Viral Hepatitis Elimination and Advocacy in the U.S.” held November 12, 2019.

Viral hepatitis—hepatitis B and C—is a leading cause of suffering and death worldwide. It is estimated that as many as 325 million people—or four percent of the world’s population—lives with viral hepatitis, leading to over 1.34 million deaths a year. In the United States, where at least 2.4 million people live with HCV, deaths from this disease exceed deaths of the next 59 infectious diseases combined. The suffering, death, and resulting social and economic burden caused by viral hepatitis is the backdrop from which the World Health Organization (WHO) called on all member nations to eliminate HBV and HCV by the year 2030. Hepatitis C elimination is defined as reaching a 90% reduction in new infections, a 65% reduction in liver-related deaths, and 90% of HCV diagnosed with 80% of people treated and cured.

The U.S. is not on target to reach this 2030 goal; one analysis showed that the U.S. would not achieve it until well after the year 2050, if at all.

At the 2019 Liver Meeting, held in Boston last November, the National Viral Hepatitis Roundtable (NVHR) brought together a group of patients, advocates, and physicians to discuss the prospects and needs to achieve HCV elimination in the U.S. There is a long way to go, but as Lauren Canary, Director of NVHR stated: “We have the tools to eliminate viral hepatitis in the U.S., but we need the willpower. My hope with this session was to call attention to the many opportunities providers have to partner with their patients and drive elimination, whether by advocating for expanded treatment access, informing the public health response, or appealing to their elected officials for increased viral hepatitis funding.”

No elimination with treatment restrictions

Robert Greenwald, a clinical professor at Harvard Law School and Faculty Director of the Center for Health Law and Policy Innovation (CHLPI), delivered a presentation called “The Path Towards HCV Elimination: Addressing Discriminatory Barriers to HCV Treatment,” where he provided an overview of HCV treatment access restrictions imposed by both public and private insurance providers.

With the development and FDA approval of new medications called direct-acting antivirals (DAAs) for the treatment and cure of HCV came much excitement for the prospect of improved health for people living with HCV. The excitement was tempered by what Greenwald calls “unprecedented restrictions” on access to DAAs. 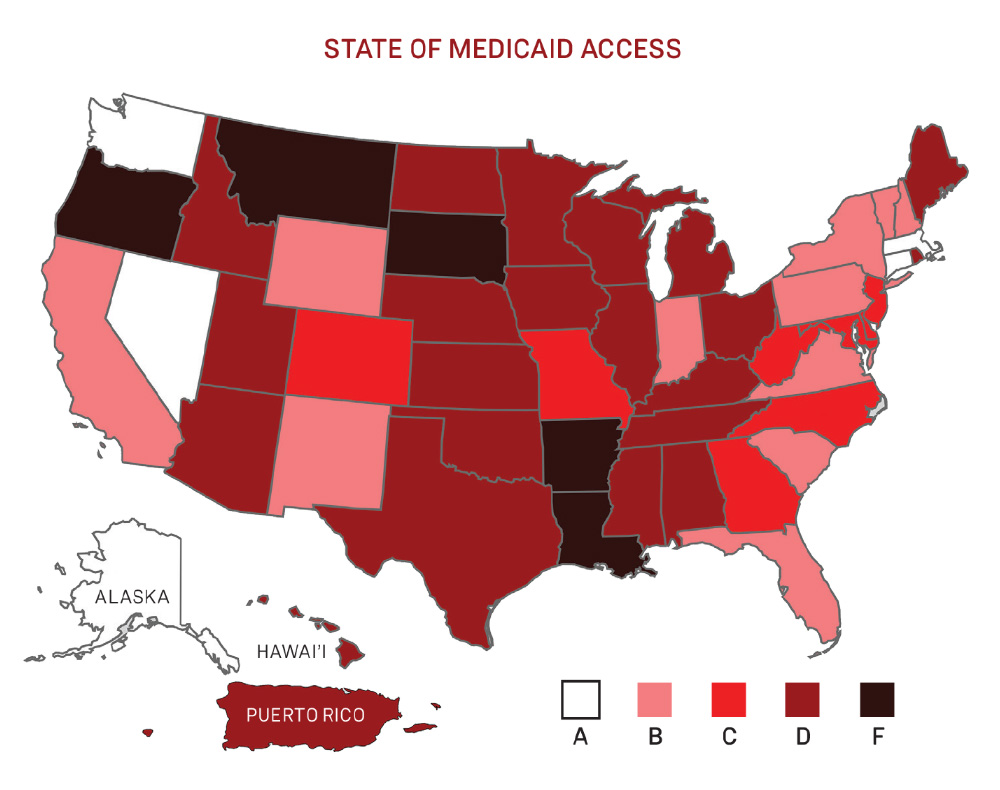 Many public and private insurance payors limited access to treatment based on disease severity, sobriety, and prescriber specialty. To raise awareness and help consolidate advocacy efforts, CHLPI partnered with NVHR to produce a document entitled “Hepatitis C: The State of Medicaid Access” (StateofHepC.org) that breaks down access and restrictions on a state-by-state basis (including Washington, D.C. and Puerto Rico) and gives each state a grade of A through F.

In 2015, the Centers for Medicare and Medicaid Services (CMS) issued guidance on HCV DAAs calling on all states to cover all medications with no restrictions. Still, many of these states ignored the guidance, so lawsuits or the threat of lawsuits, were used to lift barriers and increase access. States such as Washington, Colorado, and Michigan reached settlements during litigation, while many more states made changes before any lawsuits were needed. Similarly, there has been much prison litigation to improve access to HCV treatment and cure for people who are incarcerated.

Su Wang, Medical Director for the Center for Asian Health and Viral Hepatitis Programs at Saint Barnabas Medical Center, provided a roadmap to guide the U.S. towards HBV elimination. 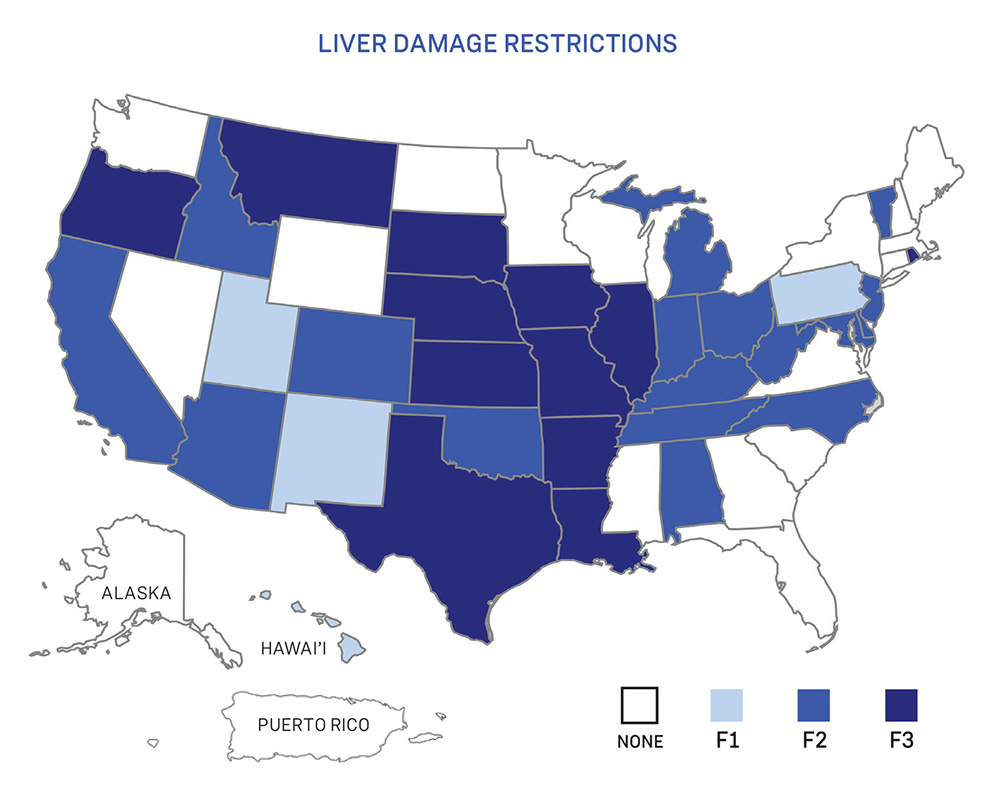 As Wang states, however, we can’t get there without first getting adequate funding and resources devoted to HBV. HIV and HCV receive over 66 times and twice the funding that HBV receives, respectively.

In addition to increases in funding, there is a need for improved screening and prevention programs. Vertical transmission of HBV is a problem worldwide, and in the U.S., there are 800–1,000 babies born with HBV each year. Preventing perinatal transmission through improved HBV birth dose vaccinations should be prioritized. Innovative models of HBV screening, such as automated screening in the ER combined with linkage to care using HBV “patient navigators” will improve health outcomes for people living with HBV and HCV. With improved awareness, vaccinations and prevention, elimination of HBV can get within reach.

The clock is ticking and 2030 is not that far off. The U.S. has far to go to get there, but with policy and practice changes, the goal of viral hepatitis elimination can be achieved. With leadership from advocates like the National Viral Hepatitis Roundtable and the Center for Health Law and Policy Innovation, as well as the collective actions from medical providers and patients alike, the U.S. will get there.

Want to get involved?

If you’re interested in becoming more involved in viral hepatitis advocacy, you can join the NVHR “Voices4Hep” Advocacy Network at voices4hep.org. This group will connect you to other advocates, keep you up to date on funding and policy news and actions and access resources to strengthen your impact.

A rising tide lifts all boats

Some hep B targets for elimination planning

A highlight of the entire session was a single slide from Dr. Su Wang that set targets and goals for HBV elimination. To get there, we need to:

•     Integrate HBV and HCV testing: People at risk for HCV are also at risk for HBV, so we should include HBV testing with HCV testing in at-risk groups and integrate linkage to care for both infections

•     Work with health department on surveillance: There are gaps in our knowledge of HBV epidemiology due to acute vs. chronic case reporting definitions

•     Align efforts with those that reach at-risk communities: There is a need to partner with community-based organizations that work with immigrant communities across diseases like HIV and TB, as well as with cancer prevention and others who work in health equity and minority health

•     Increase HBV vaccination for adults: And don’t forget hepatitis A, as outbreaks of this disease are occurring throughout the country

As HCV advocates fight for better services and increased funding for elimination, they would do well to include and align their efforts to include HBV, too.

Born Free
Twin epidemics
PrEP battles for the vagina
CONFERENCE UPDATE—THE LIVER MEETING: Focusing on the target
The Category Is... How has living with HIV affected your desire to have a family?
Scenes from the bNAb revolution
Long-acting and vaccine research moves forward
Positively Aging: Connecting past to future

Hope and redemption: Q&A with Celeste Watkins-Hayes
Camp humor, 1993
Tired of the way things are