Closing the gaps for trans and gender-diverse people

Activists produced a manifesto calling for changes in HIV programs and research to better serve the “trans and gender-diverse (TGD)” community, and making recommendations to do so.

“Whether through ignorance or bias, the engagement of trans and gender-diverse people in HIV research and responses continues to fall behind the devastating impact of the pandemic on our communities,” said Tshepo Ricki Kgositau of Accountability International, in Cape Town, South Africa, in a press release.

According to the release from AVAC, a U.S.-based global advocacy group for HIV prevention, in partnership with the global group of activists, “No Data No More analyzes how TGD communities are left out of HIV prevention research and responses through structural barriers such as discriminatory attitudes and punitive laws, non-inclusive language, failure to recognize the diverse and unique identities of different members of TGD communities, and a lack of understanding of the role of gender-affirming hormone therapy (GAHT) in TGD health. The need for change in HIV research and prevention for TGD people is clear. Trans women, for example, are 49 times more likely to be living with HIV than the general population. HIV prevalence among trans men in the U.S. is a startling high 3%, and reaches 38% in some communities, such as among trans male sex workers in Zimbabwe. And data on HIV impact on gender nonbinary people, which may make up 25-30% of trans populations, is virtually nonexistent.” 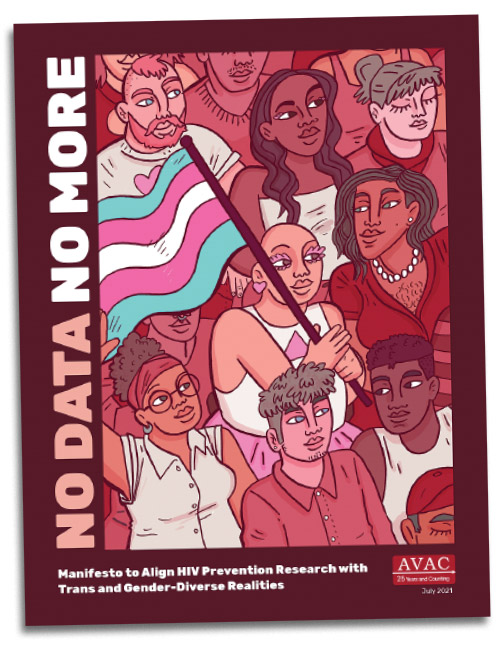 The manifesto includes a table of drug interactions between gender-affirming hormone therapies and medications used for HIV prevention (PrEP).

Said longtime HIV activist JD Davids, of JD Strategies and The Cranky Queer Guide to Chronic Illness, “The gap between the extremely high impact of HIV on TGD communities and the extremely low level of engagement of our communities in HIV research and responses can only lead to more infections and a prolonged epidemic. No Data No More is a global wake-up call for HIV prevention researchers, funders, and program implementers.” Davids, formerly of Philadelphia, lives and works out of Brooklyn.

Immaculate Mugo, also of Cape Town, who serves as a consultant on gender, intersectional sexual and reproductive health and rights, called efforts such as the Cross-Network Transgender Working Group at NIAID (National Institute on Allergy and Infectious Diseases) “laudable,” but said much more needs to be done around the world.

The No Data No More recommendations:

Go to avac.org/no-data-no-more, which includes a press conference video from the group.